Guitars Through the Eyes of Howard Paul and Robert Benedetto 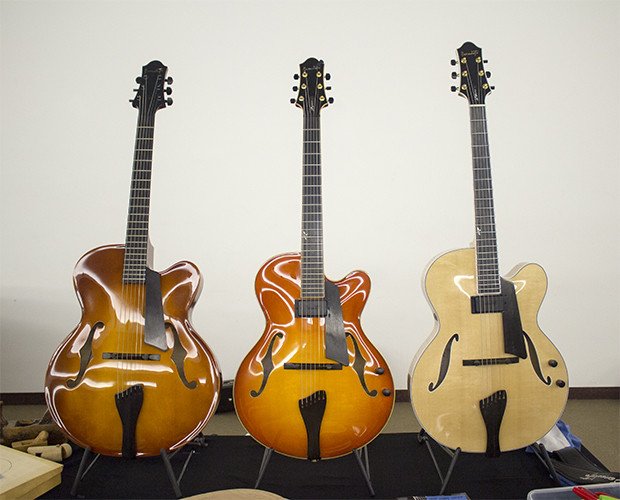 In the world of guitars, those that are coveted most by players are the custom-made instruments. Even more revered and sought after are those instruments that are entirely made by hand. Each of these is as much a work of art as it is a working instrument. In this realm, the name Benedetto represents the pinnacle of handmade archtop guitars.

So, to be able to attend a lecture this past Sunday afternoon with Howard Paul, President and CEO of Benedetto Guitars was an opportunity this author could not pass up. As an added bonus Bob Benedetto was in attendance himself and would answer questions along with Paul after the lecture.

Part of the Inspired Speaker Series presented by the Appleton Museum of Art, College of Central Florida, the event took place in the intimate 250 seat auditorium on-site which also features a state-of-the-art sound system. The event was hosted by the museum’s Curator of Exhibitions Patricia Tomlinson, who kicked things off by talking about the Inspired Speaker Series and then introduced Howard Paul.

Mr. Paul brings a full and storied life experience to his position at Benedetto Guitars. His many adventures include 10 years in the United States Army as a logistics officer, where he served tours of duty in Desert Storm and Somalia. Along with his position with Benedetto, Paul is a performing jazz musician and has worked with Howard Alden, Bucky Pizzarelli, Andreas Oberg, Jimmy Bruno, and many more.  He is chairman of the Savannah Jazz Festival, and a 2011 inductee in the Coastal Jazz Hall of Fame. A recording artist as well, his most recent releases include Tony Monaco & Howard Paul: New Adventures (2014) and Bob James & Howard Paul, Just Friends: The Hamilton Hall Sessions (2011).

The presentation that Paul gave was tailored to an audience with a general interest in guitars and how they are made. Of course, guitarists of varying skill were sprinkled throughout the attentive audience, including local Gypsy jazz virtuoso Marty Liquori of Hot Club de Ville.

Using a whiteboard, Paul discussed the various parts of the basic flattop guitar and how each contributed to producing the sound emanating from the instrument. He discussed the woods used for making archtop guitars, maple for the back and sides and spruce varieties for the carved top. Also by way of passing samples around the room, he explained different methods of extracting the wood from trees depending on what it was used for: Quarter-sawn wood for carved solid-wood tops and backs vs “sheets” of non-quarter-sawn wood for laminate construction.

Paul gave a condensed but informative history of the guitar from its humble beginnings through the centuries up until modern times. Various points touched upon were the size and construction of guitars through the years and how that was directly tied to the role that the instrument would play in a given setting. In the early days of jazz and well into the late ’30s and early ’40s for instance, most guitars provided rhythm (comping) as part of the background for the lead instruments, piano, horns, etc. That was reflected in their materials and the way in which they were played. Notable exceptions were Eddie Lang, known as the father of jazz guitar, and Gypsy jazz great Django Reinhardt, who both played lead guitar.

Naturally, there was mention of the Martin Guitar Company coming to America from Europe and bringing the guitar with them. Also touched on was the fact that guitars were smaller, quieter, and did not project as well because they were mostly used as parlor guitars in small intimate settings. Of course, no telling of the guitar’s growth as a ubiquitous instrument would be complete without mentioning Lloyd Loar and his innovations such as f-holes in place of the oval/round sound hole. Loar tuned the tops and sound chambers by removing wood from them.

With the advent of the pickup through the work of Les Paul and others, players could be heard over the rest of the band as they plugged into amplifiers which enabled everyone in the venue to hear the guitarist clearly. Because of this, they could take their playing to the next level and actually play articulate lead lines as opposed to always playing rhythm. Solid bodied guitars came into being because pickups presented a new difficulty to overcome: feedback. Paul explained the physics of feedback so that everyone was able to grasp the concept and understand why it occurred.

Paul had three guitars with him of varying construction and demonstrated the topics he’d been discussing noting differences in materials and method of manufacture and how each instrument’s sound and playability was affected by changing these.

Paul took questions from the audience and after a bit introduced Robert (Bob) Benedetto. Benedetto built his first archtop guitar in 1968, only 22 years old, and has since produced over 800 musical instruments. He has made instruments for the likes of Bucky Pizzarelli, Cal Collins, John Pizzarelli, Andy Summers, Jimmy Bruno, Kenny Burrell, and many more who have come to be known collectively as “The Benedetto Players”.

After he ended his licensing agreement with Fender Musical Instruments where he had produced his model guitars in their custom shop, he became partners with Howard Paul and they founded Benedetto Guitars. Recently the second edition of his book Making an Archtop Guitar was published. Among guitar builders of fine archtop guitars, this publication has long been considered the bible.

There was a question regarding using a pick versus using fingers. Paul demonstrated on guitar how using fingers versus thumb versus pick affected the sound of various instruments. It was very informative and perfectly illustrated the points he shared with the audience.

There were discussions on why there are sound posts in violins and not in guitars. The short answer, for those who are really curious is that violins are played with a bow and guitars are “plucked” and so if you install a sound post in a guitar the plucked note dies immediately whereas without it, the plucked note is sustained for a time.

Questions were asked regarding carved versus flat tops and the physics behind the two as far as carrying, projecting and sustaining sound, various types of glues, differing pickups and more.

The wealth of knowledge these masters shared with the audience was impressive and just to attend and then visit with them was the opportunity of a lifetime and will be remembered fondly by all that shared in the experience.