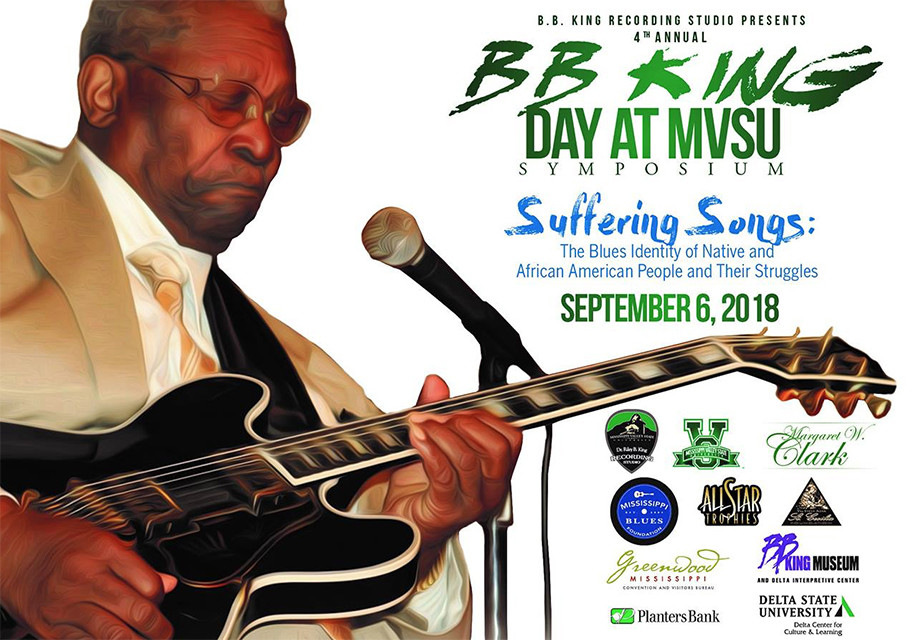 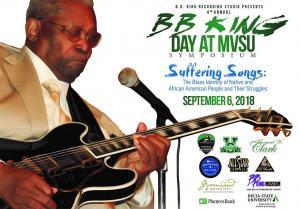 This year’s symposium is being co-hosted by the B.B. King Museum and the B.B. King Recording Studio. This year’s theme is “Suffering Songs: The Blues Identity of Native & African American People and Their Struggles.” Dr. James Johnson, Musicologist, University of Pittsburg and Co-Founder/CEO of Afro American Music Institute will be the moderator for this year’s program.

Highlights of morning events include The Expressed Suffering of the Native and African American Cultures: The Soul and Spirit of the Blues with Butch Mudbone, Harold Comby, Roy Jim, Helen Sims, and Ben Payton, and Red, Black and Blues: The Multi-Ethnicity that Surrounds the Making of American Music with Dr. Clark White, Sarah Hicks, Kenny Blake, and Bill “Howl-n-Madd” Perry

Highlights of afternoon events include The Beat: The Soul of African American Music from Blues to Motown to the Rap and Hip-Hop Nation with Ricky Burkhead, Joe Johnson, Guelel Kumba, Adib Sabir, and Bill “Little B” Perry, Jr., and a blues performance by Butch Mudbone of the Seneca Nation of Indians. Also this afternoon, Blues: The Soundtrack of the Civil and Human Rights Movement with Charles Mitchell, Reginald Seigler, Jimmi Mayes, Theodore Arthur, Jr., and Teeny Tucker.

Evening will continue to offer special events including a Symposium Art Exhibition and a Blues Showcase at Club Ebony evening performances. Check the complete schedule that follows below.

Suffering Songs: The Blues Identity of Native & African American People and Their Struggles

“Owning one’s heritage can give us a noble sense of place in the world. However, the reward may be across the bridge of suffering and pain, often at the hand of those who are ashamed.” – Dr. Alphonso Sanders

9:30 — The Expressed Suffering of the Native and African American Cultures: The Soul and Spirit of the Blues – Butch Mudbone, Harold Comby, Roy Jim, Helen Sims, and Ben Payton

“The blues is more than a style of music. It is the translation of the soul into sound; it is the call and response of a spiritual cry; It is the chanting of the past toward the future; It is the improvisation of survival; It is the paradox of freedom and creativity in suffering and pain; It is the undefinable sounds of bent tones, groans, moans, and silence.” – Dr. Alphonso Sanders

10:00 — Demonstration of the Evolution of Early Suffering Field Howlers Toward the Blues Performance and talk by Ben Payton accompanied by Dr. Paul Schreiber and Dr. Ben Arnold

10:15 — Plantations and Reservations: The Survival and Influence of the “Ring Shout” and Drums on the Development of the Modern American Music and Dance Culture
William Dan “Swift Eagle” Isaac, Guelel Kumba, Ricky Burkhead, and Dr. C. Sade Turnipseed

For both Native and African Americans, dance, driven by drum rhythms, has remained an integral part of daily life. In the slave culture, mostly on southern plantations, we can trace evidence of traditional African tribal dance practices shared, blended, and reinvented toward modern dance. Conga Square was Africa in New Orleans, as the slaves were allowed on Sundays to be themselves.

In the culture of reservations, Native American tribes along with traditional dances kept their traditional governing structures of councils and courts. However, reservation bondage created suffering of poverty, malnutrition, and inhumane living conditions very similar to African American slavery. For both cultures, whether it be simple steps or intricate movement, from ceremonial to entertainment, the rhythm of drums and dance are at the core of their traditions. Dance is the triumphal spirit of the soul.

10:40 —- Mystic Winds of the Mississippi Band of Choctaw Indians
The Spiritual and Social Dance – Narrated by Dan “Swift Eagle” Isaac

10:55 —- The Sound of Black Baptist Church Singing and Its Relationship to the Blues Reminiscing with Fred Wilson, Helen Sims, and Teeny Tucker

When BB King made his transition from gospel to the blues, he said he just changed “oh Lord” to “oh baby.” Ray Charles’ recordings “What’d I Say” and “I Got A Woman” was his most controversial hits as they sounded virtually identical to black Pentecostal church music which is based on the syncopated style of African rhythms. Thomas Andrew Dorsey called the “Father of Gospel Music” combined Christian hymns with the rhythms of jazz and blues. Dorsey’s “Precious Lord” and “Peace in The Valley” are among the greatest heartfelt anthems of the black church.

At a point in history, inter-racial births were identified by whites mainly as “colored” people. Imageries defining segregation became more pronounced under the “Jim Crow Laws”. Many who passed as white were able to live the privileged life. Today many inter-racial identities are proud to know of and reveal their true heritage. Music has played an important role in building racial harmony. Who truly was Charlie Patton, Muddy Waters, Jimi Hendrix, and Etta James?

The first initiation held by Alpha Phi Alpha fraternity, founded in 1906, was held at the Masonic Hall, also known as Odd Fellows Hall and Red Men’s Hall. This close association with an African American Masonic society suggests that early fraternities and sororities may have modeled some of their rituals on those of other secret societies of the time. It is thought that the tradition of stepping performances by black Greek-letter society likely evolved from competitive drill team movements.

In an article called “Hell-Week,” Van Taylor describes the pledging activities of Omega Psi Phi and Kappa Alpha Psi fraternities: “What desire is this that will cause young men, stalwart of frame, and rugged of heart and mind, demurely and aesthetically to dance about the campus as if in time to the fairy Pipes of Pan?” The phrase “the fairy Pipes of Pan” suggests that the men are performing to a music or beat that only they can hear; as in stepping, there is no accompanying music. Excerpts from “A History of Stepping,” by Elizabeth C. Fine, Ph.D.

Historically, American education has failed to reveal the many important contributions of African and Native American pioneers in the making America. Many writings even portrayed them as fearful, unintelligent, and even villainous adversaries. In many ways, the miseducation and twisted perspectives are still implored today. Ignorance is the proverbial grave of the mind. Writings are useless without a thoughtful reader. There is no searching for real answers without real questions.

1:40 — The Beat: The Soul of African American Music from Blues to Motown to the Rap and Hip-Hop Nation – Ricky Burkhead, Joe Johnson, Guelel Kumba, Adib Sabir, and Bill “Little B” Perry, Jr.

2:15 — Blues Performance by Butch Mudbone of the Seneca Nation of Indians

Many songs are a monitor of history, which lyrics are nonfictional truths expressed divinely from the soul of the singer. Songs like “A Change Is Gonna Come”, “I Wish I Knew (How it would Feel to Be Free)”, “Strange Fruit” “People Get Ready”, “Mississippi Goddam”, and “Blowin’ in the Wind”, are songs of history’s spiritual cry and awakening.

3:25 —- Final Presentation: Tribal Dance and the Blues with Audience Participation