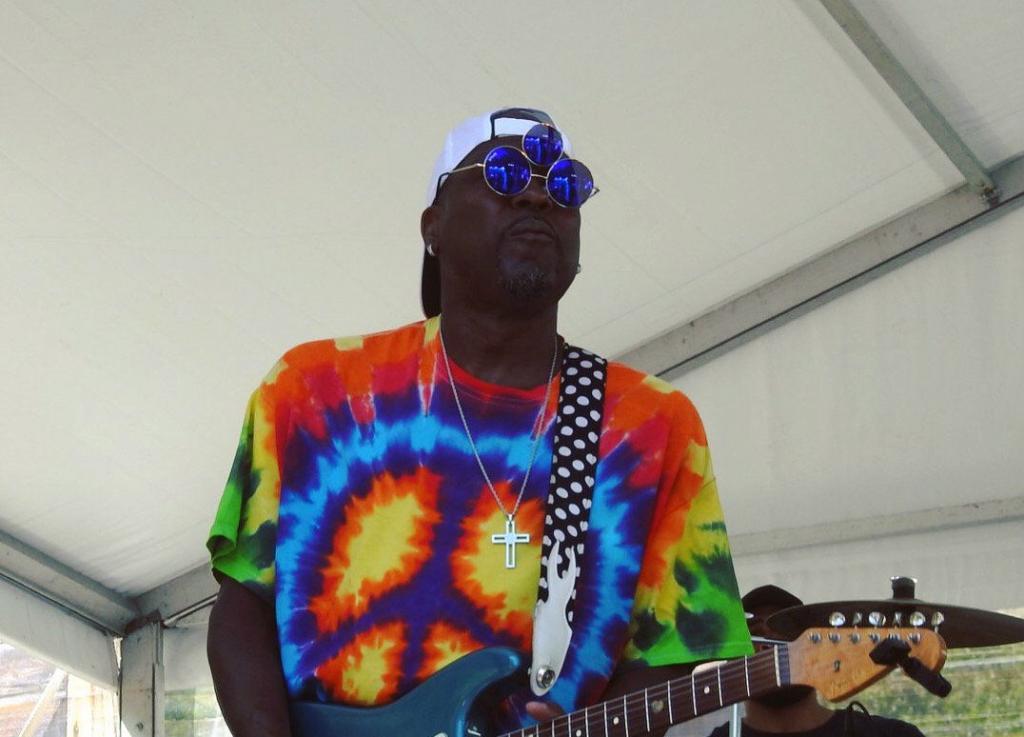 Greg Guy is a recipient of the 2014 Chicago Blues Hall of Fame as an Honorary Master of Blues, and his guitar playing is greatly influenced by Prince — aside from being the son of the Living Legend Buddy Guy. One of Chicago’s own Sons of the Blues, Greg Guy has been playing music most of his life, as it’s in his DNA. He started playing his guitar publicly on the Buddy Guy’s Legends stage in 2009 during his father’s January Residency shows. With prior attempts he built the courage to join his father. He has toured the world with his father in the following places: São Paulo, Brazil, California, Texas, Arizona, Michigan, Missouri, Indiana, Utah, Colorado, and Louisiana.

In 2019, Greg played with Kenny “Beedy-Eyes” Smith at the Chicago Blues Fest and
stacked up recording credits with chart-topping Irish traditional musician Sharon Shannon on “Sacred Earth”; Dave Weld and The Imperial Flames on “Slip Into A Dream”; Chris Wragg and Greg Copeland’s “Deep In The Blood”; and the critically acclaimed new release “Drop The Hammer,” by another of Chicago’s Sons of the Blues, the great Kenny Smith. Greg ventured on his own building musical relationships overseas in Rome and London, taking his guitar playing to new heights. Currently, Greg Guy and The Robert Fetzer Band can be found at Chicago local blues venues collaborating together in the tradition of “Keeping the Blues Alive.” Greg Guy is proving to audiences everywhere he’s one of the hottest young guitar-slinging blues artists on set today, and rightful heir to the greatest name in blues music.

It sounds like Prince was the reason you picked up the guitar: How did you find your way into Blues?

Well actually it was my dad. The story goes when I was young I just knew him as my dad. I didn’t know he was this Buddy Guy guy. He played the guitar and I really liked guitar. My dad gave me one and it sat around and collected dust. Prince was always an influence. My dad told me to check out Jimi Hendrix, Muddy Waters, and many other guitar players. At the time I thought Prince was the main guitar player. As time went on, I started checking out other guitar players. If what my dad was listening to when he was young still sounded good, I realized I had to play music like that. It’s music that will be around forever.

There are so many. I like Kingfish and Jamiah Rogers. They are the next generation. There are many guys who play extremely well and you do not hear much about them. I wonder why these players aren’t mentioned around the Blues circuit. There is a guy named Tony Palmer who is electrifying. Carlos Johnson is another. All of these players are amazing and I learn from them all. The list goes on and on with me as far as guitar players.

What are you currently working on with Jimmy Burns?

Jimmy and I just started about a week ago and I am currently in the studio. I put a track together that I could see him singing to in a real soulful bluesy old school kind of way. I could hear his voice on the track. I play with him at Buddy Guy’s Legends and I realized he would be perfect for the song. Jimmy Burns is one of my favorites.

How do you approach electric guitar playing and how would you describe your style?

I like Stratocasters and Telecasters. When I play, I never play the same thing twice. Every time I hit the stage I present something new on the guitar no matter who I am with or where I am playing. People notice I have a style. I listen and play with my heart and soul. I open up and let my fingers do the walking so to speak. I also like the acoustic guitar and alternative music. I am always listening. When I get onstage I never approach someone and say let’s play this song in F, A, or D. I get onstage and ask them what key they are playing in. They tell me the key and I play as if I am at home coming up with ideas. One time I thought I was in trouble when I played with my dad. He told me he needed to talk with me. I was biting my nails. We get in the car and he told me, “Whatever it is you are doing on the guitar don’t stop because people like it.” Now I keep going and don’t stop.

I have been writing songs for a while. I just didn’t know what category to put them in. I didn’t know if they were considered Alternative, Blues, Pop, or Jazz. I take all of the styles of music and create. It’s like a pot of gumbo you put the shrimp and sauce in and it all tastes good.

How would you describe the current Chicago Blues Scene?

It’s fine and cool. It’s not a bad place. We have several locations here. We have my dad’s place, Buddy Guy’s Legends, Kingston Mines, and B.L.U.E.S. on Halsted. All of these places have great Blues. Hit or miss you may not always have a great show but these places are fun to go to and hear up and coming artists and different styles of music.

It had to be with my dad, Charlie Musselwhite, and Jimmie Vaughan in California. It was a great experience to be onstage with those guys. I would have given myself a fifty-fifty shot meeting those guys without my dad. Being my dad’s son, I had a ten percent boost. My dad put me onstage with them and he doesn’t care who he puts me onstage with. He calls me up and tells me to just play what you play.

The Blues is Alive and Well like my dad said. I am going to be part of The Blues with my contributions. I have a different style as I can shift from Muddy Waters to the new sound. These younger kids are playing the older stuff, but they are speeding it up and creating their own riffs. It’s not going anywhere. When my dad was four or five he was listening to Slim Harpo. When I heard it I didn’t think the guy could have been around when my dad was young because it sounded so good. The younger generations are playing the same things. The Blues isn’t going anywhere.