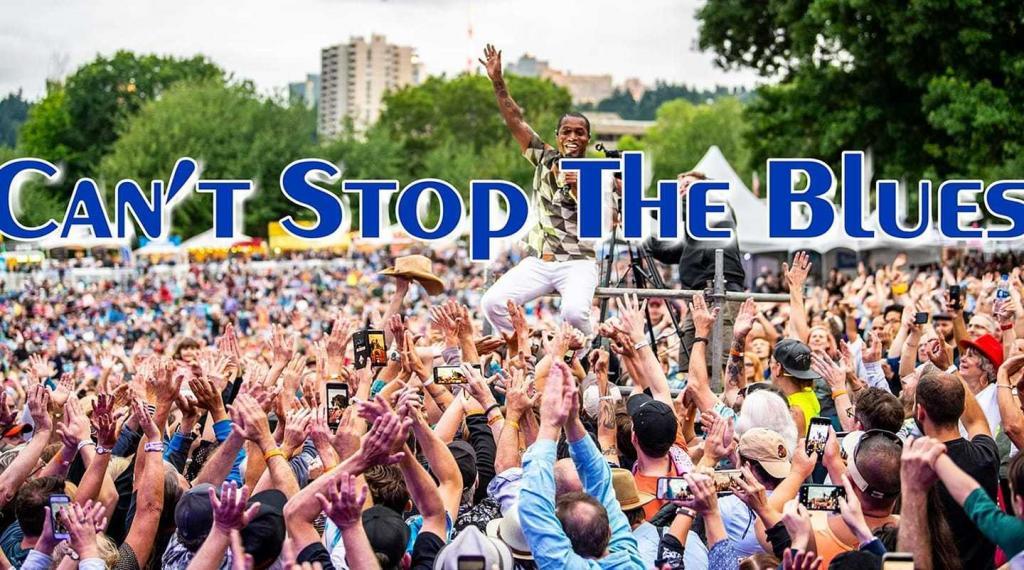 In response to the overwhelming COVID-19 situation, it became immediately apparent to blues fan Karen Gottheimer that help was needed for Blues Artists who are losing income as a result of cancelled concerts worldwide. Many artists lack the technology at home to go live. Her solution? The creation of a virtual “venue” bringing “live” performances by the blues artists we all love directly to us, and more importantly, allowing us to interact with and tip these artists for their performances. She enlisted the help of engineer/producer/webmaster Crafton Barnes and Can’t Stop the Blues was born.

They immediately set up a Facebook page, Facebook group, and website (links available below) to bring this plan to fruition. At breakneck speed CSTB was born.

Can’t Stop the Blues allows blues fans and artists to interact in the most intimate way possible. Shows from the artists’ homes are uploaded and broadcast into our homes along with pre-show and post-show “meet & greets” live in real time, in the comment stream. Fans can interact with the artists and each other throughout the broadcast, and virtually “love” and “applaud” the performances in real time.

“Right now this is the closest people can come to reaching out and holding hands,” says Gottheimer. “We’re working to capture a big enough audience so we can give all blues musicians a chance to play a show and hopefully at least earn enough to eat right now. If you can’t see it live, we’re the next best thing.”

Initially started as a way to help blues musicians make a living during this crisis, this has rapidly become something much bigger. “In this time of isolation, the artists need to feel a connection to their fans, and the fans need to feel a connection to the artists and each other,” she continued. “We are providing everyone with a platform to do just that, and the response has been overwhelming.”

Gottheimer is a blues fan. She’s attended the Legendary Blues Cruises, the Big Blues Bender, and several other festivals. “It’s always been my absolute outlet for entertainment,” she tells us. “I had tickets to the Tampa Bay Blues Festival and when I found out that was cancelled, at first I was disappointed that I wouldn’t be able to see all my friends. Then it dawned on me, oh my gosh, all these musicians rely on their tours to eat. Even the top blues musicians in the world don’t make that much. So I just started thinking, what can we do to help? I’ve never done anything like this before, and I have no idea what I’m doing, but let’s just start putting it together and see if we can help.”

Her first bit of help came in the form of Crafton Barnes. “Karen and I have a mutual friend, Judy Eliyas, who has worked with me for years on the Eric Gales team,” Barnes says. “Judy heard Karen’s idea and reached out to me to see if I could assist in any way. And at first I wasn’t even sure how artists would be doing these things on their own, or even if they WOULD be, so I was hesitant at first to jump right in. But I’ve known Judy for a few years now and when Judy recommends somebody you know they are solid. So I contacted Karen and gave her a list of things that I’ve been doing for Eric Gales’ live streams for years. Basically that was it. I said to her that I felt that every artist should have these tools already but that I also understood that many of them do NOT and the ones who were hurting the most due to cancelled shows were those very artists. BLUES ARTISTS, specifically.”

Gottheimer describes her first meeting with Barnes as instantaneous synchronicity. “It was the two key pieces of the puzzle that came together,” she says. “Hand in hand we have created this monster. He’s so excited to be part of this and has so many ideas. He’s been a magician. Everything from right before showtime thunderstorms coming through making the power flicker at his broadcast studio, to being able to pull a hundred thousand rabbits out of his hat.”

“Karen convinced me that if we could set up a sort of a ‘Broadcasting Triage’ for getting these Blues artists up and LIVE right NOW and work out all the bugs as we go, then we could determine all the other barriers that artists have faced over the years,” Barnes continued. “Things like P.R.O. management, the BMI, ASCAP and SESAC requirements, the royalties, in other words what artists are owed yet somehow get forced to pay themselves when they live stream. I told Karen these are the organizations that monitor jukeboxes, bars, even coffee houses for public performance royalties and what we would be doing constitutes a public performance.”

“For me, working with Eric Gales, this has always been taken care of because Eric has his requirements agreed to with his label and management personally,” Barnes said. “And all we’ve ever broadcast are strictly his live performances, never his actual album tracks. We reached out to BMI, ASCAP etc. and we determined if we follow these rules regarding public performances then we were set to fire up LIVE that minute with live music recordings only. I contacted Eric and got his permission to use our technology for Can’t Stop The Blues and we went LIVE for the first time for 120 hours straight as we worked out the initial bugs in our first broadcast. We set up the Group, Page and Website along the way while we endurance tested the live feed on multiple platforms.”

Can’t Stop the Blues is a 100% not for profit (title pending) organization that enables blues artists to connect with fans who have the passion for the Blues. “While tips to the artists are needed and requested, everyone is welcome regardless of their ability to help financially,” Gottheimer says. “Their love and support of the artists and the blues community alone are a huge contribution. All donations go directly to the artist. CSTB thanks everyone for their passion to help, donate and contribute and be a part of gathering with the blues artists we all love.”

How does the “tipping” work? The artists record a show, and upload that to Can’t Stop the Blues. Then, when the show is broadcast, fans are afforded the opportunity to “tip” the artist in real time using various pay sites. Tipping from a Venmo or PayPal account directly to the artist is free. For tipping from a credit card, CSTB suggests Bravo Pay, as the least expensive option, but CSTB wants us to know that whatever is easiest for fans to use is what they want us to use.

“I like to think of it as ‘Virtual busking,” Barnes tells us. “That tradition started with the blues and we don’t want it to ever stop. This technology we are using is out there. Has been since 2006 onward. What we are really doing now is getting this content TO the FANS. We’ve re-purposed a set up usually only available to venues such as the Iridium, for instance, and we are handing this tech one on one to each artist as we go, so that they themselves can continue to get tips, donations and sell their merch, for years and years to come. Once this current distancing is over, these artists will be prepared more than ever and these Blues Fans will all know how this works in terms of tipping and donations.”

“All of these shows are available to watch at any time in the video archives on the page,” Gottheimer adds. “People are using our live shows as a ‘social event’ as well. In the comments section you can see when your friends pop in, so you can greet them. From the time we ‘open the doors’ (approximately 30 minutes before showtime), through the show itself, we’re getting a couple thousand comments per show.”

“Also, be aware that we have a fourth redundant back up of all this. And that is on the website called ‘Audio Only’,” Barnes adds. “It is the CSTB Radio Station. And if all else fails on the internet, you can listen to the audio at CD quality with little bandwidth! We are in the process of registering with TuneIn in the Blues category, but the audio only feed embedded on the website has been running for years, as the Eric Gales radio station, and now it is fully dedicated to CSTB and expanding soon to all blues artists who want to be in rotation during those times that live video is not being streamed. It’s our own 24/7 Live Feed!”

There are others onboard with Can’t Stop the Blues as far as making it run. “We have some key volunteers who have jumped in to help,” Gottheimer informs us. “Daryl Hawkins has, from the beginning, helped us to develop the basic infrastructure for the page and the group, and refine it as we go. He also handles all the event posting, and coordination behind the scenes, in addition to acting as a personal host in our broadcasts.

“Our most recent volunteer is Judy Eliyas who is handling some of the social media postings, hosting on the broadcast comment stream, and most importantly handling all of the artists reaching out to us, getting them on the list and helping them prepare for their upcoming shows as we expand our format and capabilities.”

“Our goal, within the coming weeks, is to expand to a virtual ‘festival’ format, with multiple ‘stages’, so that all blues artists making a living with music have a chance to play to our audience,” Gottheimer adds. “Big changes are coming soon, and we appreciate everyone’s patience with our growing pains during this time.”

Upcoming shows include Gracie Curran AND Albert Castiglia’s CD Release Party, both tonight (Friday April 3rd); Eric Johanson AND Gary Hoey (Saturday April 4th); and Terry Hanck & Friends (Sunday April 5th), with many more artists currently recording their shows as fast as possible, so they can be added to the schedule in the coming days.

Artists wishing to perform a show on Cant’ Stop the Blues can contact Karen Gottheimer or Judy Eliyas at [email protected] For technical details visit: cantstoptheblues.com/information