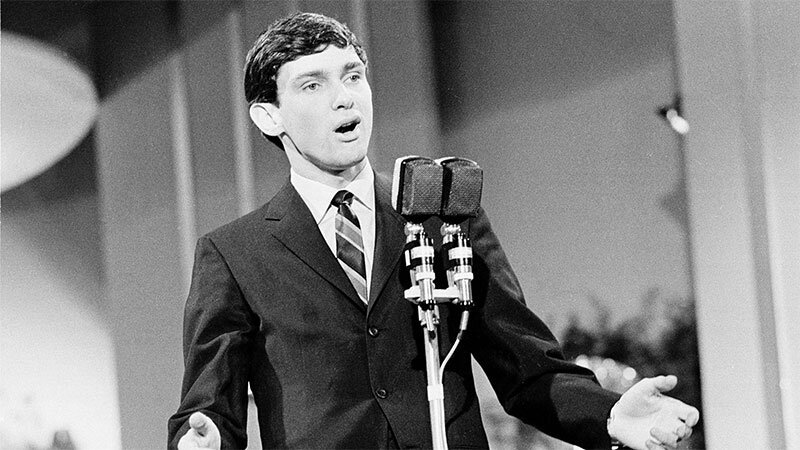 Editor’s note: Don Wilcock is writing his memoirs. This is the first of several looks back at artists he’s interviewed in 51 years as a music journalist.

I was shocked when Gene Pitney died in 2006 that his death received so little publicity. He was ubiquitous in the pop music world in the ’60s beginning in ’61 when his song “Rubber Ball” sung by Bobby Vee went to number 6 in the Billboard pop charts and a year later The Crystals’ hit with his “He’s A Rebel.” But his own self- penned hits stand out for his orchestral arrangements as well as his recordings of Burt Bacharach and Hal David’s “The Man Who Shot Liberty Valance” and “Only Love Can Break a Heart.” In countries around the world he had a different signature song: “24 Hours to Tulsa” in England, “The Man Who Shot Liberty Valance” in Australia, “Only Love Can Break Your Heart” in Canada and, of course, “Town Without Pity” in the U.S.

It seemed that everything he did was totally unique, and he rubbed shoulders with everyone from The Stones to George Jones. He was also unusual in that he never put the music ahead of his family. When he played Proctor’s Theatre in Schenectady in 2004, my wife Shelly was looking forward to meeting him, but her daughter Tracy was suddenly taken to the hospital in an emergency. Backstage, Pitney called Shelly to give a get-well message to Tracy and to tell Shelly she was sorely missed at the show.

He always put family first. In 1970 with his two sons, at 2 and 3 years old at the time, Pitney began to feel guilty about a travel schedule that had him on the road 11 months out of the year. By 1988 he had cut back to six months and discovered that it not only helped him spend more time with his kids, it also improved his performing.

He told me at the time, “Anybody in any line of work who keeps doing the same things over and over and over again without objectively looking at it or stopping or getting away from it erodes their output. You’re working just as hard. You think you’re as good as you were before, that you’re putting out 100 percent, but it erodes to a 90, to an 80, and you become very mechanical after a while.”

What I find most interesting about his long career is his connection with artists and genres that you might not expect from someone whose biggest hits were written by pop standard writers Bert Bacharach and Hal David. He once cut an album of duets with country legend George Jones, a man he describes as a wonderful guy but an all-time character.

“I never in a million years would have ever thought of (Rick Nelson) being the one to record ‘Hello Mary Lou.’ My publisher had gone out to California. I found out recently he ended up playing with (Rick’s father and TV personality) Ozzie Nelson, trying to get Rick to record that song.”

Never one to write music in a conventional manner, he recalls how “Hello Mary Lou” came to be in 1961. “I had a 1935 Ford coupe. Candy-apple red with a rumble seat and a white orlon top. I used to take this thing and drive to this pond called Walker’s Reservoir. I literally grew up here (Rockville, Connecticut). It was a seven or eight mile walk from my house, but I would think nothing of it. I would swim, fish and shoot BB guns there. I would park this car in this one little parking space that looked out over the water.

“Now, you gotta picture nobody from this area did anything in music, especially at that time, and here I am sitting in this coupe with this guitar. I can’t tell you to how many police I had to explain what I was doing.”

But probably the most outlandish combination of music personalities occurred at a 1964 Rolling Stones recording session that put Pitney in the same tiny London studio with pop “wall of sound” producer Phil Spector, legendary publicist Andrew Loog Oldham and the Stones themselves to record “Not Fade Away.” The way Pitney tells it, Spector drove up unannounced in a big, black Rolls Royce. Oldham had asked Pitney to show up in hopes of getting the feuding Stones to talk – and maybe play – together. Pitney and Oldham concocted a story that it was Pitney’s birthday and that it was a long-standing tradition that everybody had to drink a water glass of cognac to celebrate.

“We went in on that premise, and it broke the ice, and everyone ended up playing. As a matter of fact, I’ve heard one of the outtakes that’s bootlegged on the internet, and it’s ridiculous. I mean, it’s totally obscene. Everybody sounds like they’d just drunk a bottle of congac.”

Which of course they had.

“Yeah, right. I love the credits because they say Phil Spector played maracas, and what he actually was playing was an empty cognac bottle with an American 50-cent piece. That was his percussion instrument.”

In my 2004 interview with Pitney he shrugged off this seemingly uncanny ability to fit in with every kind of eccentric in the business while he himself maintained the same home phone number he’d had for 40 years and lived eight miles from the suburban Connecticut home he grew up in as a kid.

“Oh, you just accept people as they are, and I have no problem with that at all. Very few people rub me as being different. As a matter of fact, that’s one of the things I love about England is the way the English people accept eccentrics and eccentricity. It doesn’t bother them one bit. I mean, if you want to go out and plant lamps in your front yard, it’s ok.”

His hit single “Town Without Pity” turned a failed Kirk Douglas film of the same name into a box office smash.

When you’re young and so in love as we
And bewildered by the world we see
Why do people hurt us so?
Only those in love would know
What a town without pity can do

It won the 1962 Golden Globe Best Song Award, and its Oscar nomination gave Pitney the distinction of becoming the first pop artist ever to perform at the Academy Awards ceremonies. He described the experience as scary as hell.

“I was the only singer in front of an entire audience that included Burt Lancaster, Kirk Douglas, Judy Garland and Marilyn Monroe. All these people, and I had to sing. The only one! I mean, when I say frightening, this guy came up to me and said, ‘Ok, now. This is what I want you to do. We want you to start up here on the second tier and when Johnny Green starts the orchestra, we want you to sing all the parts up until the instrumental up here on the second tier. Then, we want you to walk down these seven steps to where Mr. (Bob) Hope is on the lower stage.’ Then, he said the magic words. He said, ‘And we don’t want you to look down while you’re walking down the steps’.”

Pitney says he was more concerned about his mother watching him fall flat on his face on nationwide TV than he was the star-studded audience. In any case, he didn’t fall. In fact, 42 years later, in 2006 he was attempting to score his fourth straight decade of charting hits. And he was proud that he was not simply an oldies act. “I try and stay away from that as much as I can because it’s kind of like putting a cardboard box cutaway up and playing the songs that were hits.”