Titan of the Telecaster. That’s the title bestowed on Bill Kirchen. A founding father of the Americana and Outlaw Country movements, Kirchen has been playing, writing and recording music for over five decades. The Proper Years is made up of 38 songs from his albums Hammer of the Honky-Tonk Gods, Word to the Wise, and Seeds and Stems, plus three bonus tracks from Transatlantica, his 2016 project with pub-rock progenitor Austin de Lone. 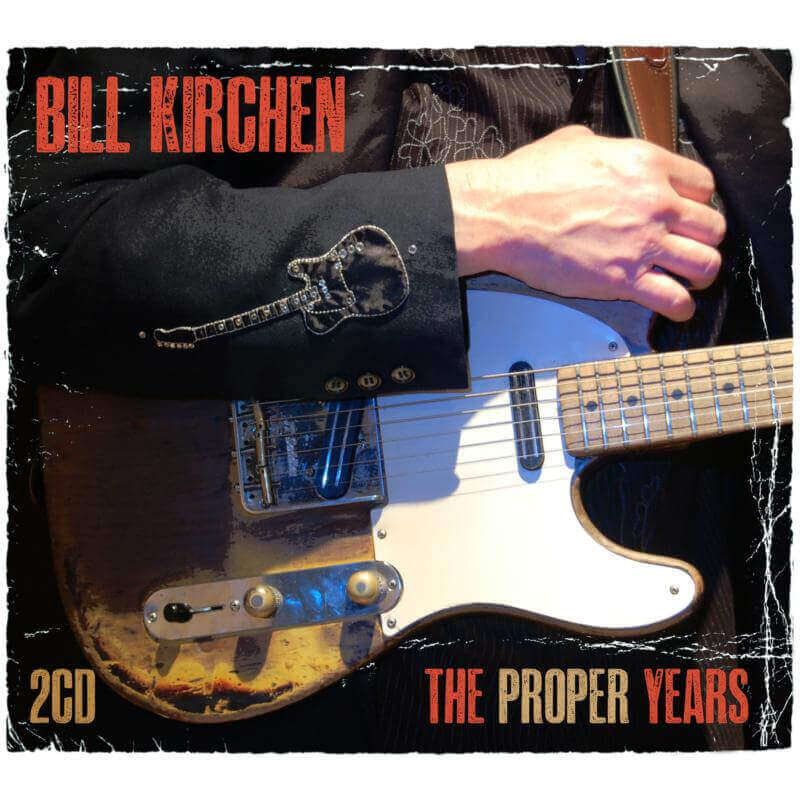 Kirchen’s musical journey started in high school when he played trombone at Ann Arbor High School. At the tender age of 16 he hitch-hiked to the 1964 Newport Folk Festival to catch a glimpse and listen to Mississippi John Hurt. The following year he went back and witnessed history when Bob Dylan went electric in 1965. “That pretty well blew away the competition for what I was going to do before, or if, or when I grew up,” he says of those experiences.

Back in high school he formed the Who Knows Pickers jug band and performed at the senior talent show. He met folksinger David Siglin, long-time manager of local folk music venue The Ark, and joined the local folk scene. In college he formed a “psycho folk-rock-country” band that would later become Commander Cody and His Lost Planet Airmen. That group pretty much gave birth to the Americana and Outlaw Country movements as they were admired by artists including Willie Nelson, Waylon Jennings, the Grateful Dead, and Allman Brothers Band.

Bill was one of the first to mash up rockabilly, country, western swing, honky-tonk, jump blues, jazz, boogie-woogie,  psychedelic folk rock, and the Bakersfield sound. He had a decades-long relationship with Nick Lowe that began when the Lost Planet Airmen broke up and Kirchen formed a swing orchestra called The Moonlighters, playing a form of music he referred to as “dieselbilly”.

Kirchen worked and played with artists that included Elvis Costello, Gene Vincent, Link Wray, Roy Buchanan, Jimmy Thackery and many more. In 2006, Bill kicked off his new deal with Proper Records by recording Hammer of the Honky-Tonk Gods at their London studio. The band on the album was Lowe, Geraint Watkins and Robert Trehern and it was engineered by Paul Riley.

The Proper Years is the best of those Proper Records tracks, four album’s worth, all produced by Riley. “Where else do you get a record company where the owner plays drums, the producer plays bass, and they tour with you?” Kirchen says of his good friends. “They’re the best.” All the guests are in line with their appearances as well. Lowe and Watkins appear on ten tracks, from the driving “Hammer of the Honky Tonk Gods,” a song written about, what else, his Telecaster, an instrument he describes as “the bicycle of the electric guitar —the most efficient way to get from point A to point B.”

The lead track and dozens that follow showcase Kirchen’s wit alongside his top-notch guitar work. His lyrics are sometimes comical, sometimes heart-wrenching, but always relatable. “I like music where at least someone onstage is smiling sometimes, fer crissake,” jokes Kirchen, who’s often grinning happily when he’s not busy singing.

His truck-drivin’ songs are plentiful including “Semi-Truck,” “Truck Stop at the End of the World,” and “Mama Hated Diesels.” His humor shines bright as the sun on “Too Much Fun,” “Talkin’ About Chicken,” “Down to Seeds and Stems Again,” and “Bump Wood.”

True country/Texas Swing songs on The Proper Years are represented by songs like “Rocks Into Sand,” “Truth Be Told,” “Husbands and Wives,” and “Open Range.” Kirchen’s rockabilly influences come across on “Get a Little Goner,” “I Don’t Work That Cheap,” and “Rockabilly Funeral,” while the blues are represented by “Ain’t Got Time For the Blues,” “One More Day,” and “Flip Flop.”

As always, I have a couple favorite tracks on every album I review, and on The Proper Years it’s a toss-up between Kirchen’s early-60s, sock-hop cover of “Devil With the Blue Dress,” and his almost 8 minute version of “Hot Rod Lincoln.” On “Devil” he slows the groove way down from the Mitch Ryder version keeping more in tune with Shorty Long’s 1964 original. Once you hear it performed this way, the more up-tempo versions just won’t cut it anymore.

On “Hot Rod Lincoln,” Kirchen comes out of the gate just like the original take. His guitar is unmistakable and his vocals do it proper justice. But then, at the two minute mark, Bill goes on a tangent of epic proportions. Giving nods to every single artist (it seems) that had any kind of influence on him, calling them out by name and playing licks from some of their most famous tunes. From Johnny Cash, Roy Orbison, and Johnny Rivers to Marty Robbins, The Ventures and John Phillip Sousa all pulled over and let him by. Kirchen rattles off a laundry list of rockabilly, country, and blues artists (with their licks) that mentions Fats Domino, Professor Longhair, Ray Charles, Little Richard, Count Basie, Bo Diddley, Chuck Berry, Elmore James, Muddy Waters, Howlin’ Wolf, Link Wray, Alvino Rey, Stevie Ray, all 3 Kings and then some. It’s four-and-a-half minutes of musical homage set smack dab in the middle of one of Kirchen’s most popular covers, and to me, is worth the price of admission.

The Proper Years comes on a 2 CD set, and for you vinyl lovers, Waxworks – The Best of the Proper Years has 10 of the best songs from the collection and hits shelves the same day, July 24th via The Last Music Company.

Although Kirchen says he has “more stuff in the works,” The Proper Years could very well be his finest collected work.