Ben Harper Is in a Good Place 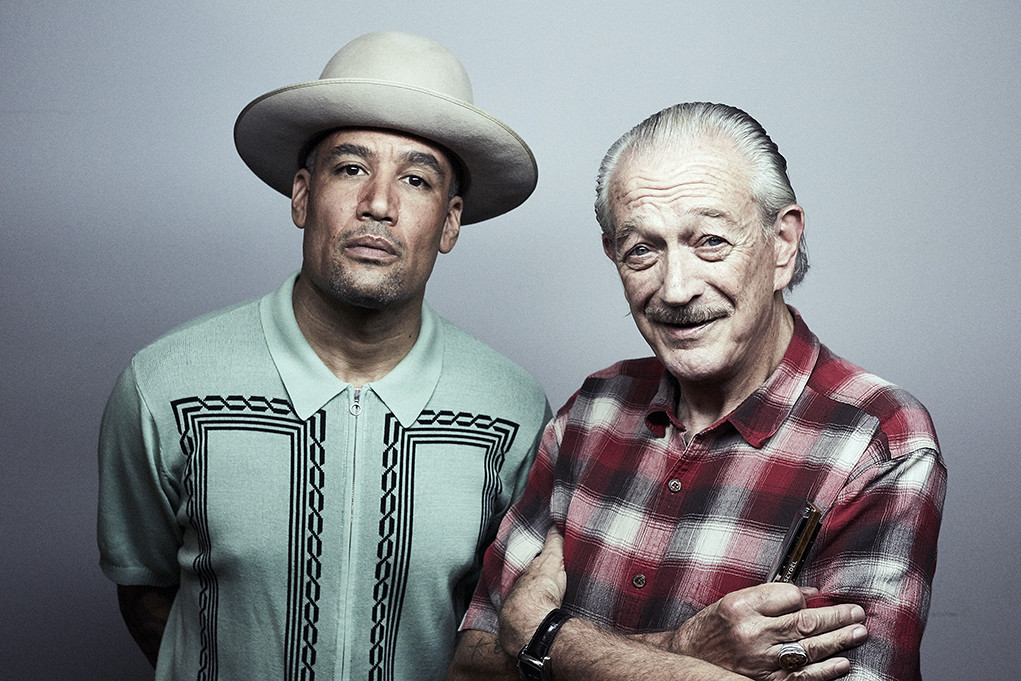 Ben Harper has put in some work. He has had a long and substantive career releasing one quality album after another. Old fans love it and his work gathers new fans into the fold at every turn. Why? Because quality and honesty are hard to find. Sincerity and vision are a scarcity in a musical landscape littered with the benign and ordinary.

This multiple Grammy Award-winning future Hall of Famer has given us blues, soul, gospel, rock, reggae and more and never misses a beat. His live performances are always inspiring. In 2013 he released his first collaboration with Charlie Musselwhite, Get Up! which won the Grammy Award for Best Blues Album in 2014. His most recent collaboration with Musselwhite, No Mercy In This Land, hit the streets on March 30th via the ANTI- record label. 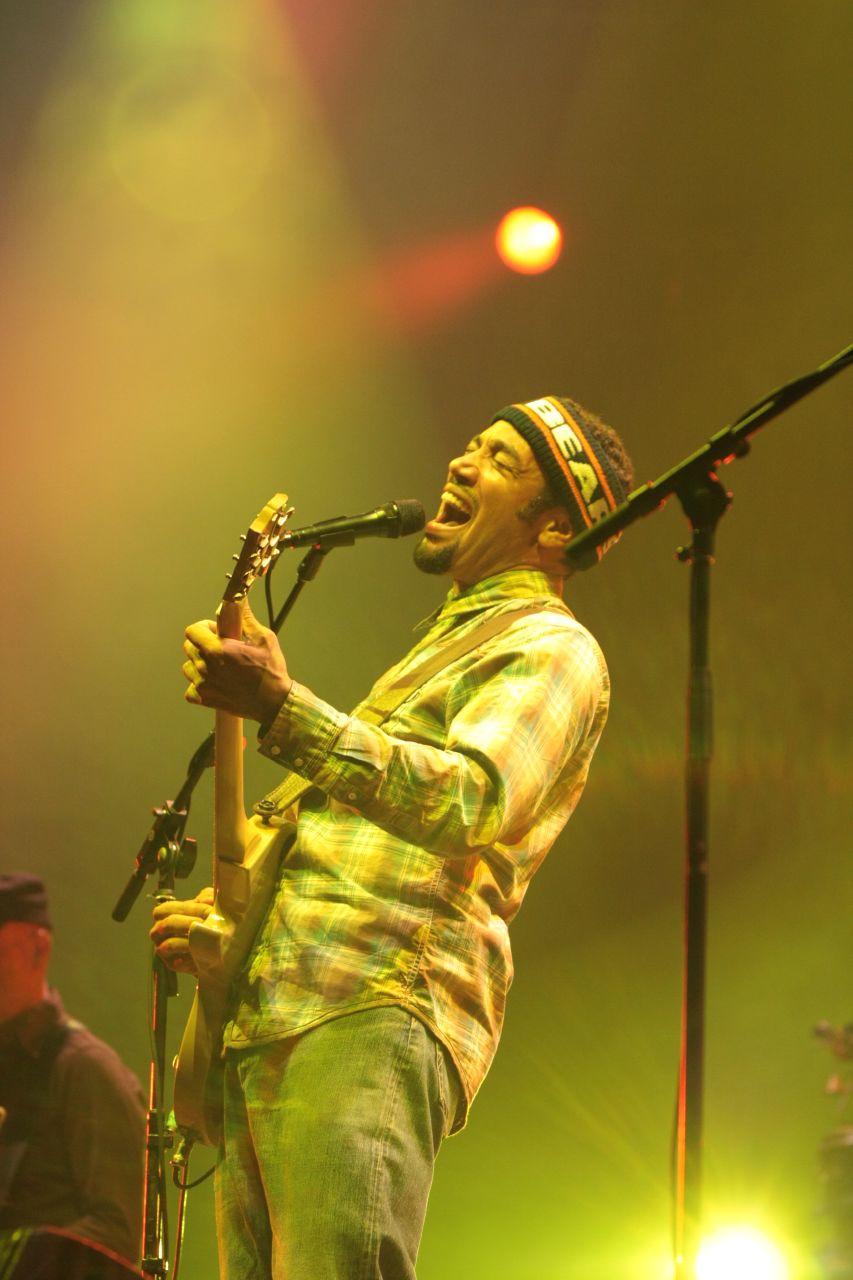 Talking about the new album you said, “It had to be done. There’s just too much open road between Charlie and I.”

Yeah man, I mean, I’m born again! I’m born again with blues! I started out with the blues. The blues is what prompted me to pick up my instrument. Now, I’ve gone to a lot of different shades of music, a lot of different styles; but I’ve never strayed but a step away at any moment of being all the way blues. True blue. Charlie and I met through John Lee Hooker. John Lee Hooker said, “You need to do something together.” It took us a long time to pull it together. Once we kicked open the door with ‘Get Up!,’ we knew that was just the start. We knew it.

Charlie said something interesting, too. “It’s nice to work with somebody who understands what you want to say… and you can do it together.” Having heard the album, and having heard Charlie say that, would you say that y’all are like an old married couple that finish each other’s sentences now?

We can. We can. Personally, and musically. I love that you caught that. We had a shorthand coming in and that got even shorter with a couple hundred shows and a couple million miles of travel and the camaraderie that comes with that. It’s beautiful to have an unspoken, as well as spoken awareness of where each other is going, on and off the stage. It’s something I could have only earned. Otherwise, I wouldn’t have been ready for it.

Charlie has also said, “The friendship, which is really important, to play together musically and share our musical ideas with each other because they’re coming from our hearts, not just from our heads. This is really soulful music.” So, he was into it and enjoying y’all working together as well. It just clicked.

I love hearing that. Charlie has been in it and at it for a long time. He’s worked with a lot of people. I mean imagine: From Little Walter and Muddy Waters to Tom Waits and Cyndi Lauper.

You expressed your comfort with him saying “I feel as much or more at home with Charlie as with anyone I’ve ever played with in my life. The blues I write is born to be played with Charlie.”

That’s true. If I can even take that one step further… I grew up listening to Charlie Mussselwhite. I’m a student of the blues. I have thousands of records. I inherited my grandparent’s 78 collection. I’m as much a student of the blues as I am a participant in the blues. I’m the biggest blues fan in the world. My family has had a subscription to various blues magazines for forty years. It’s just my heart and soul.

Growing up I made it me life’s work. I went and spent a winter with Louis Meyer in Chicago. I got to know Brownie McGhee; we used to sit in his garage and pick and I… Me and his daughter Bonnie went to Home Depot shopping. We used to give candy to neighborhood kids. We’d look in Brownie’s scrape book.

My first professional gig was Taj Mahal when I was in my twenties. This is my music. So when Charlie embraced me the way he did, that’s a dream come true for someone who not only plays the blues but has a fanatical commitment to the philosophy of the blues. It’s a way of life and I understand that. The blues delivered me; it saved my life. If it wasn’t for the blues I’d be in the back of a store repairing guitars. That was my life’s work.

And it’s through the blues that I’ve been able to see the world. It’s only been a matter of time before Charlie and I set out on this journey. It was written long ago, Charlie and I.

You had an interesting observation about the blues: “When blues is doing what it’s supposed to do, it’s a mirror; not only to yourself, but to the culture and times you’re living.” You want to say a bit more on that?

I don’t know if I can say it as clear.

Like “No Mercy In This Land.” It can be applied to different cultures, but it’s now. To be able to put the blues in a modern context for me is very important. When blues is doing what it’s supposed to, it has a way of turning sorrow, turning confusion… it turns… the blues is firing on all cylinders.

It becomes an emotional source of awareness and clarity. I’m trying to put it to words. It’s so hard. When blues is doing what it’s supposed to be doing, you wanna say “Amen!” after it. It has a way of grabbing you by the chest and shaking the nonsense out of you.

There’s so much coming at us from every direction now! The blues just cuts the center of all the nonsense and shakes the dust off of it.

Speaking of grabbing you and shaking you… I was listening to the album again this morning. So “Nothing at All” comes on and I’m listening thinking, “This is a confession.” It was like you were reviewing your life and confessing to yourself like, “This is what went down…” It was deep, and grabbed the moment.

Hey man, we did it! We communicated. We got the frequency. I shot the flare up and you saw the flare and came and rescued me. That’s just what happened. That confessional component to all this is so real. The songs aren’t finished until someone presses play. That song in particular, for me is flesh off the bone. That one might not make the stage because… there’s only so honest a man can get in public.

Funny you should mention “shaking.”  I make notes when I listen to songs and when I got to “When I Go,” the note I wrote for myself was “Is so powerful. Grabs you and holds you and shakes you, and doesn’t let you go.” It’s one of those songs that doesn’t let you go until it’s finished with you. I don’t know if that’s what you were feeling that when you wrote it…

You know! You know the blues! I have no ego left man. I’ve taken too many hits. I’ve taken the brunt of too many opinions that ego left in this game.

Yes, but isn’t that liberating not to have to worry about what gets said? Just do your thing and leave it on the table like “Hey, there it is, do what you want.”

Yeah. This is the most liberating record I’ve ever been a part of. Along those lines, this is the first record I’ve ever had out… I’ve always known what record is next. I’ve always known the next record I was gonna make and the next turn I was gonna take. This is the first record I don’t know… this is it! This is some type of arrival to find itself, for me and for the public. Maybe this is my swan song. I don’t know man.

I don’t know if I have much to say after this.

I was listening to “Bad Habits” and then comes the line, “When a man gives you his hat, he’s living on borrowed time.” Great line! That’s right up there with “See that my grave’s kept clean” and “I asked for whiskey and she brought me gasoline.”

Oh, look at that!

The best part of it is that I wear a fedora. People that see me around town wouldn’t know who I was without it. All the old guys that I knew growing up all wore really cool hats. So when I heard that I’m thinking, yeah: that’s some truth there. Just a brilliant line.

That is so… so. Let me tell you. My dad gave me his hat and being a little small, I took it to get pushed out. They loved the hat. It was a real old old Stetson but kept immaculately clean. They asked where I got it and I said from my dad. They asked if I was getting it steamed for him. I told them “No, he gave it to me and I’m getting it steamed for me.” They said, “When a man gives up his hat, that means he’s ready to go.” Sure enough, my dad had hidden the fact that he’d drank and he had cirrhosis of the liver. Within a month of that, my dad passed.

Ten years later, Solomon Burke gave me his hat. I wrote a song and he wanted me to come in the studio and help him bring it to life. Solomon gave me his hat man and a month later, he was gone. I ain’t giving my hat away!

That shit is real!

You caught it, man. Someone out there caught it. I knew if I shot that flare up high enough…

I smiled when I heard it.

You made my day.

Are you comfortable with where you are at musically? Do you feel like you are in a good place; comfortable in your own skin? We were talking about feeling liberated…

I’m so comfortable right here, right now. I’ve got a couple million miles to go with Charlie; a couple hundred shows down the road. I’ve never been so content creatively as to what’s on deck and what’s on record. I’m so content that I have nothing planned for the next record.

I think that’s a sign of contentment to not even heading in that direction, just to be sitting in this, this accomplishment. This record with Charlie, these shows; very content.

Ben Harper’s Winter Is For Lovers is out now on ANTI- Records.