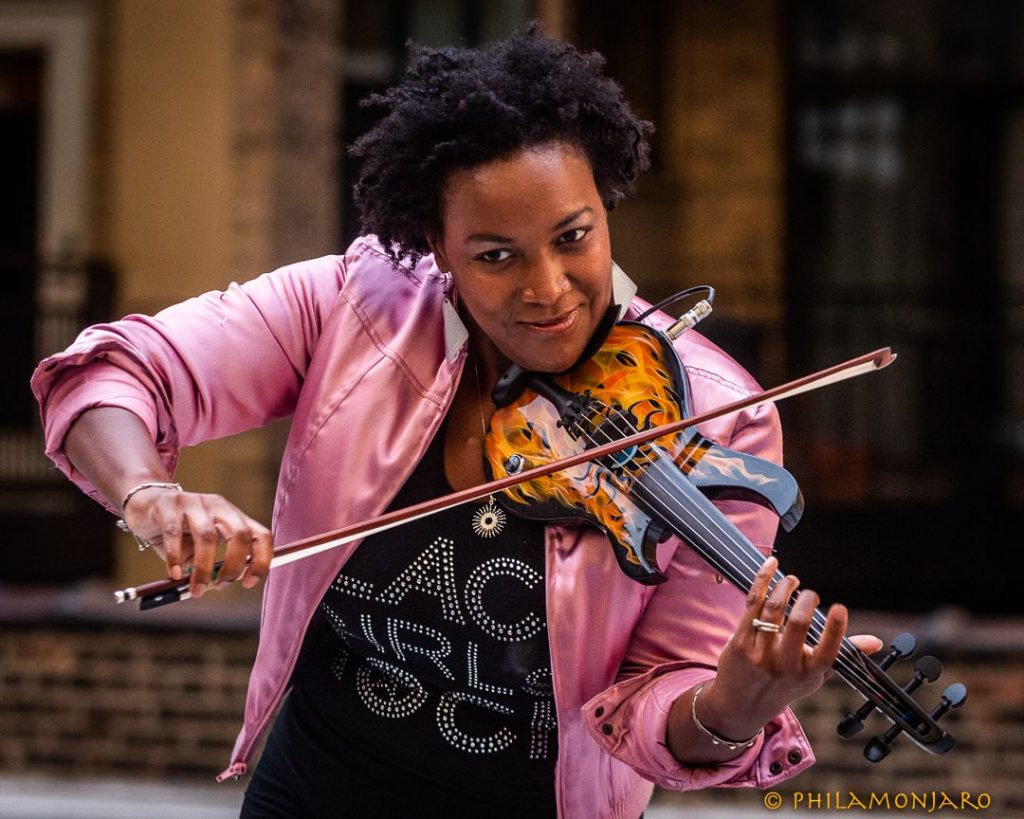 Throughout the summer, Adia became an urban troubadour with a portable amp, effects rig and a flame-stained electric violin. She provided her neighbors momentary respite from politics, pandemic, and injustice while inspiring the resolve to carry on.

This modern-day fiddler on the roof provided a mythical, sage-like soundtrack appropriately set to Chicago-style 16 bar blues. There was no fame or glamour to it. Just the power of music helping us heal our frayed connective tissue of humanity. Something to be thankful for on this most unusual Thanksgiving. 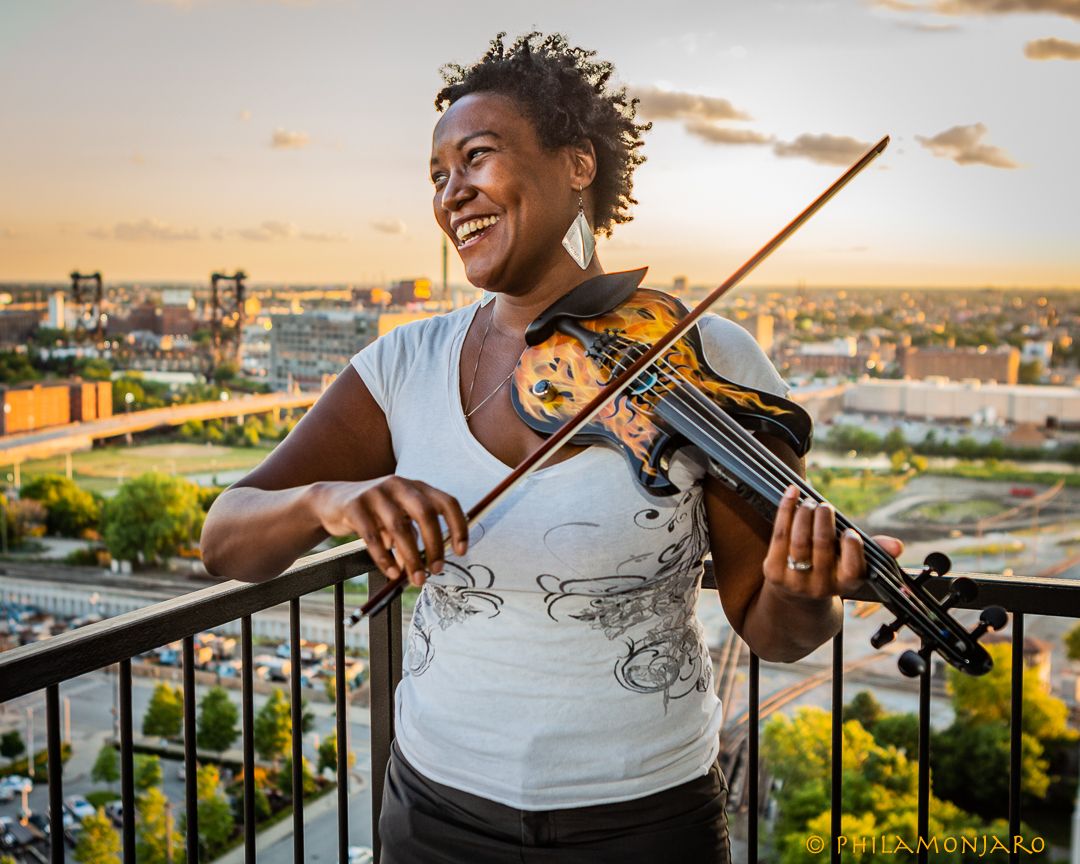 This has been a love fest. You feel a lot more connected, knowing you can at least say “hi” across the balcony. 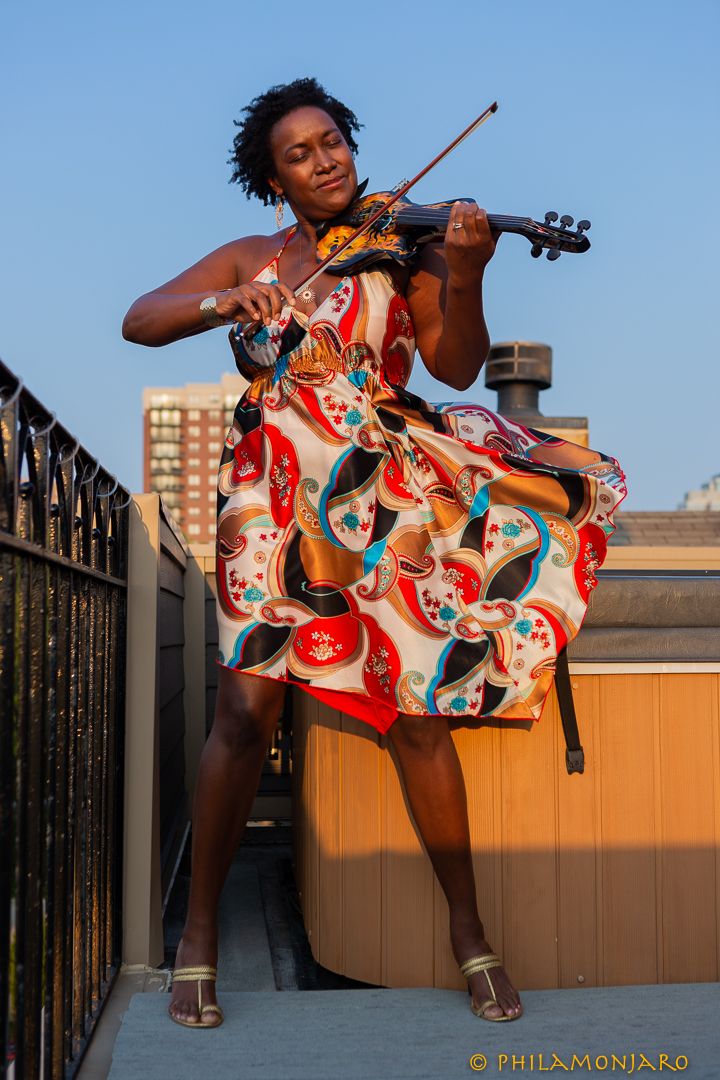 It all started when the South Loop neighbors organized these nightly shows, where we’d turn on strobes or string Christmas lights along the balcony. We played in honor of the first responders for Nurse’s Appreciation Week, and then we looked across the roof tops at our neighbors and realized we had established this musical community. I’d think, ‘Let me go outside and play. I started jamming with people across from me; everyone else would be hooting and hollering.’

When it comes to soloing, blues is my background. B.B., Eric Clapton and Albert Collins. 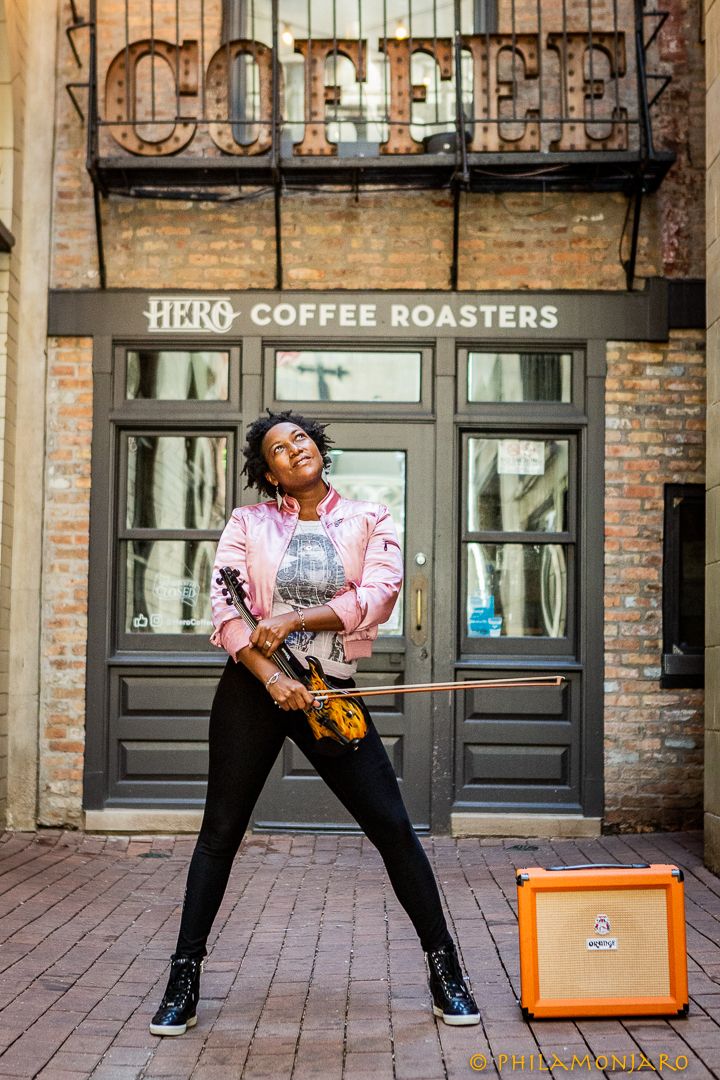 My definition of creating communities? Well it starts with coming out of your own box. 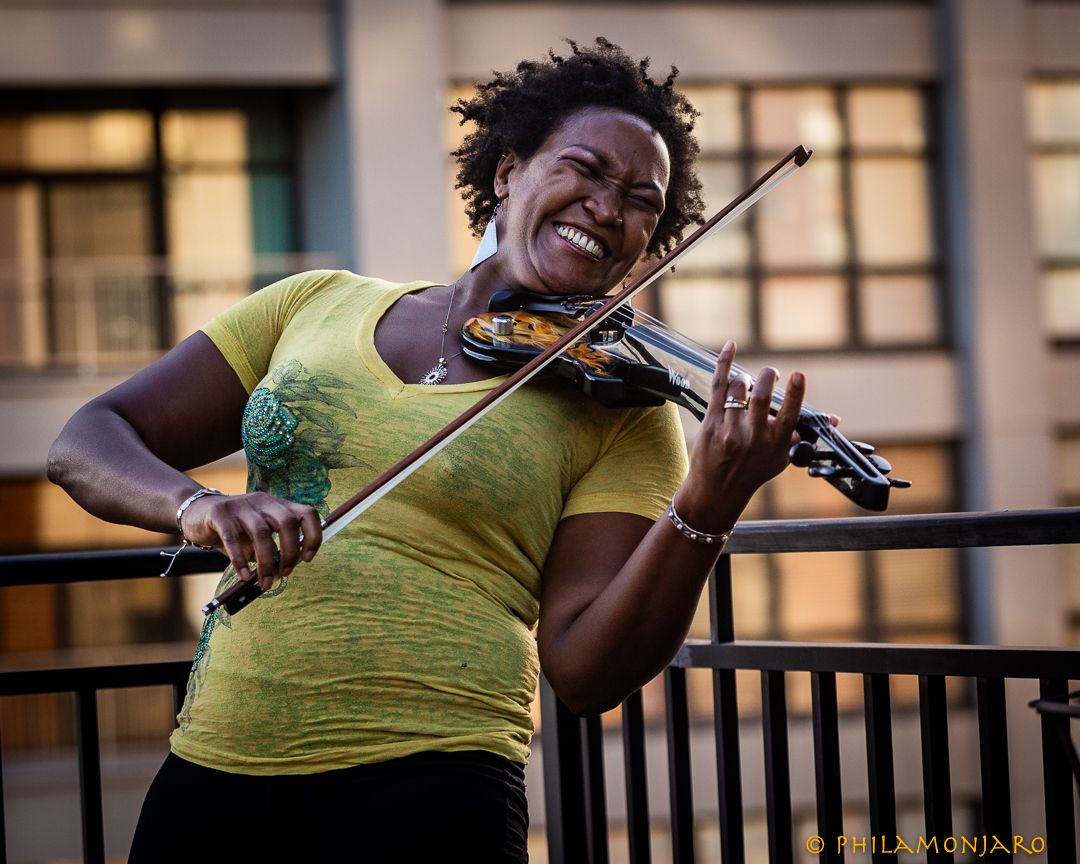 My father-in-law, Nikola Sarapa, was a violinist who switched to electric guitar. I’d be listening and thinking, ‘I want to do that.’ Nikola was my conduit, helping me bridge the gap between rock and classical. 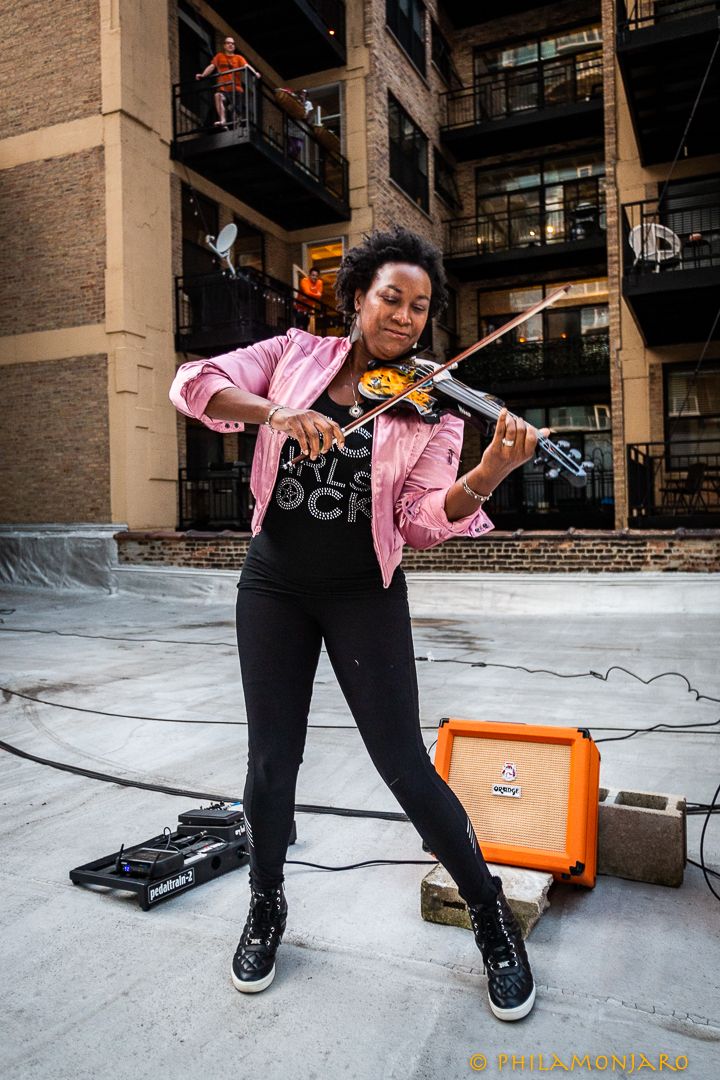 Then there was the Trans-Amoeba artist collective’s rooftop. We went up the fire escape. Phil’s pal Shorty ran power and threw out a Persian throw rug for the rooftop audience surrounded by neighboring balconies. 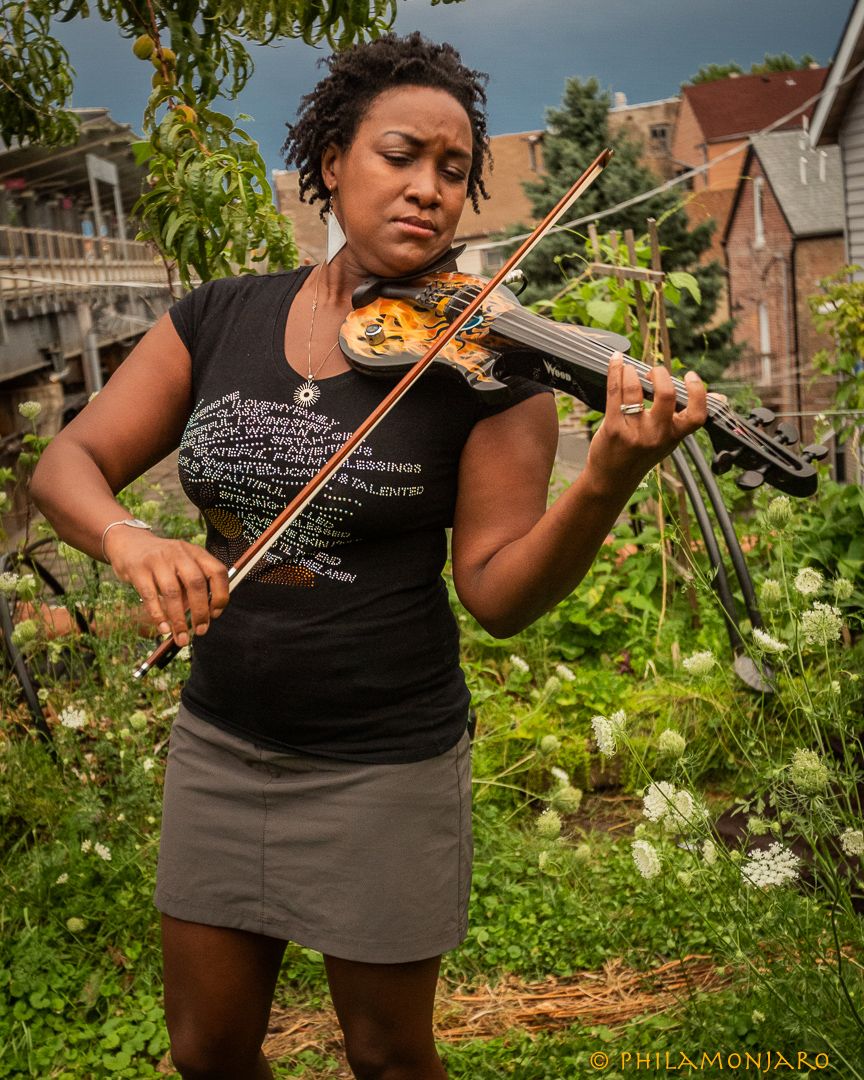 The “Eco-Village” near Damen on 21st overlooks the Pink Line CTA train line. The rooftop garden has these beautiful long vines and nettles. 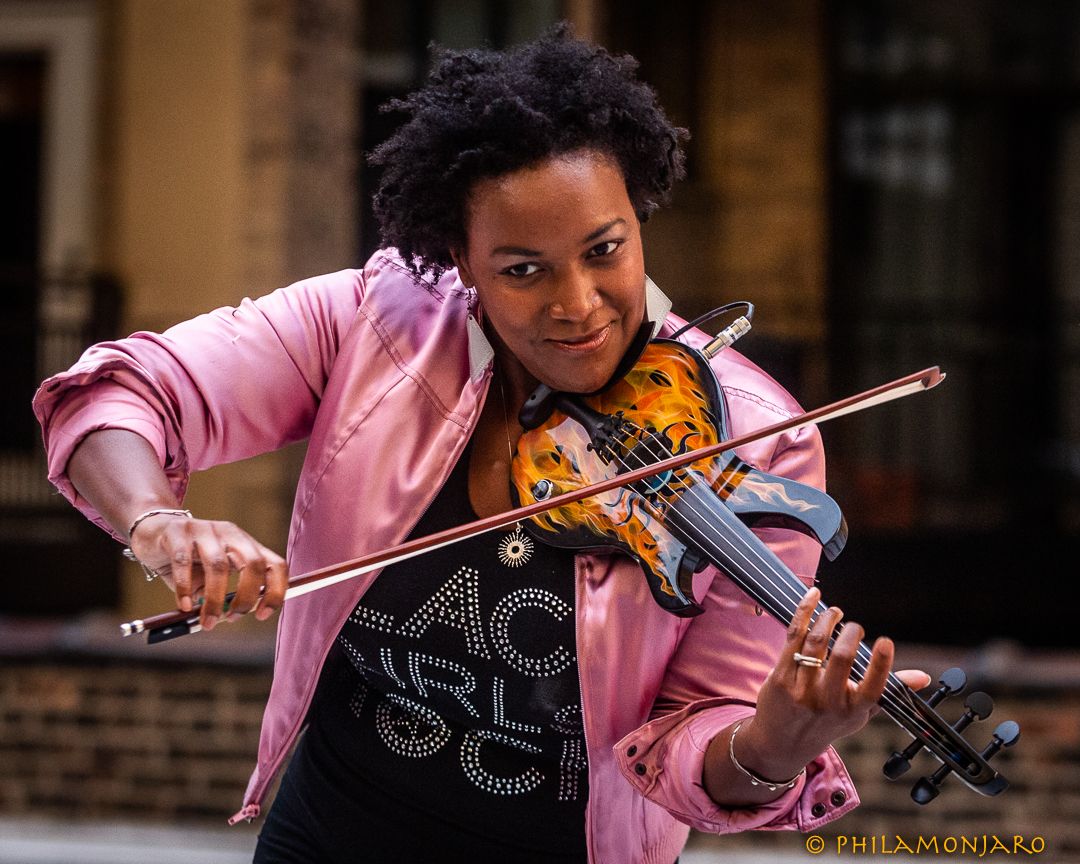 I’ve always had a strong ear and that definitely helps with improvising, but venturing out of the classical realm was a big leap. Improvisation is another challenge. The first piece I actually transcribed was an arrangement of ‘Be Happy’ by Jean-Luc Ponti. 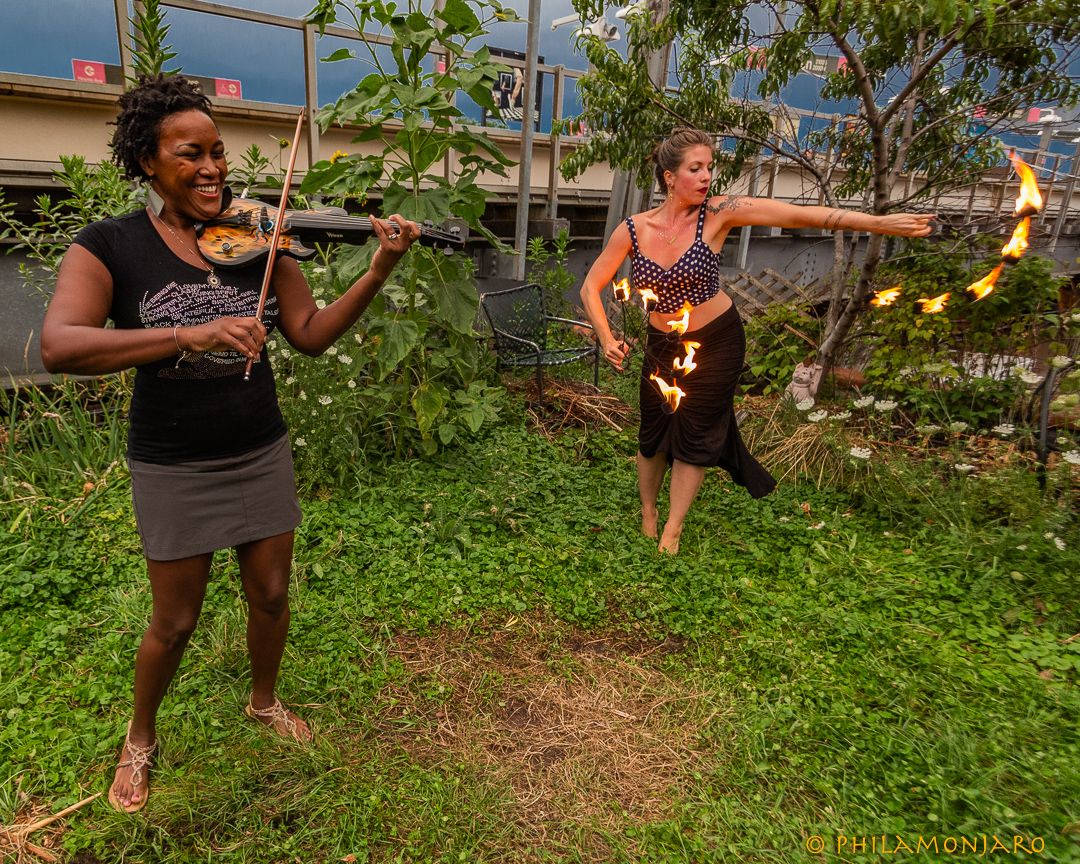 I collaborated with Gaea Lady, a flow artist and fire dancer. 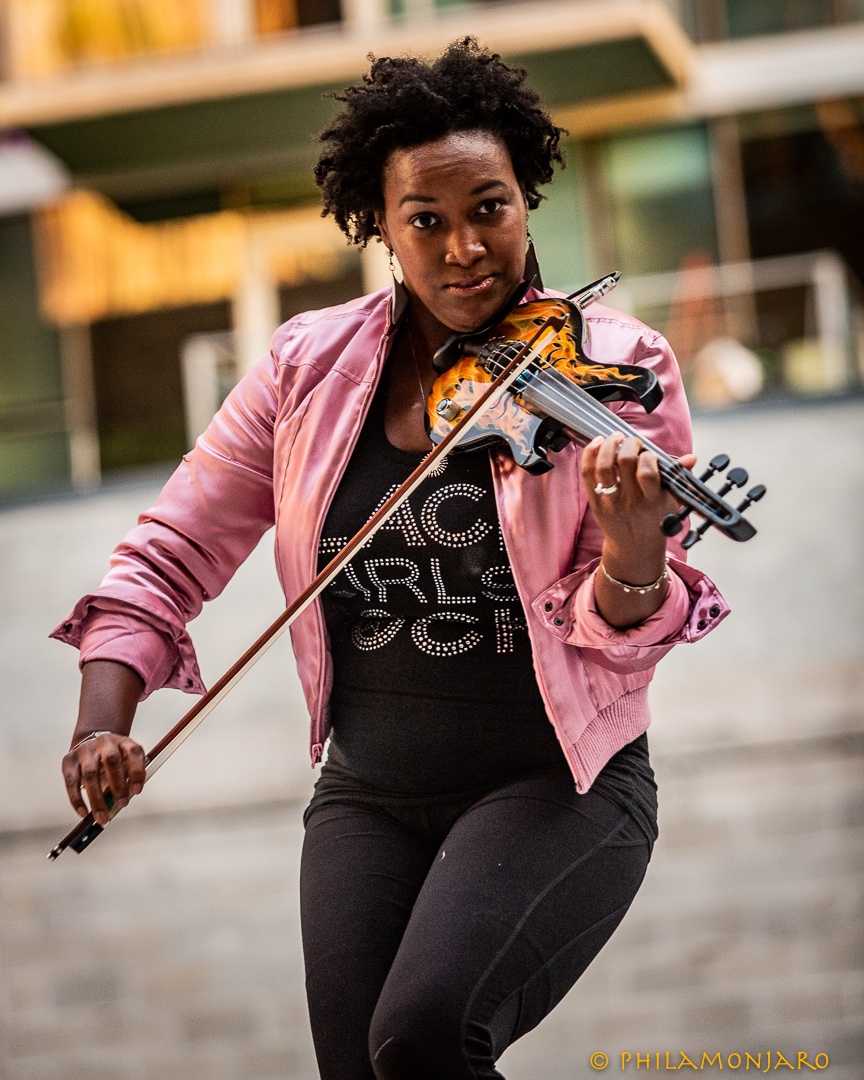 Jimi Hendrix was one of my earliest rock inspirations. I also listened to Jean-Luc Ponty,  Stephane Grappelli and Slash. 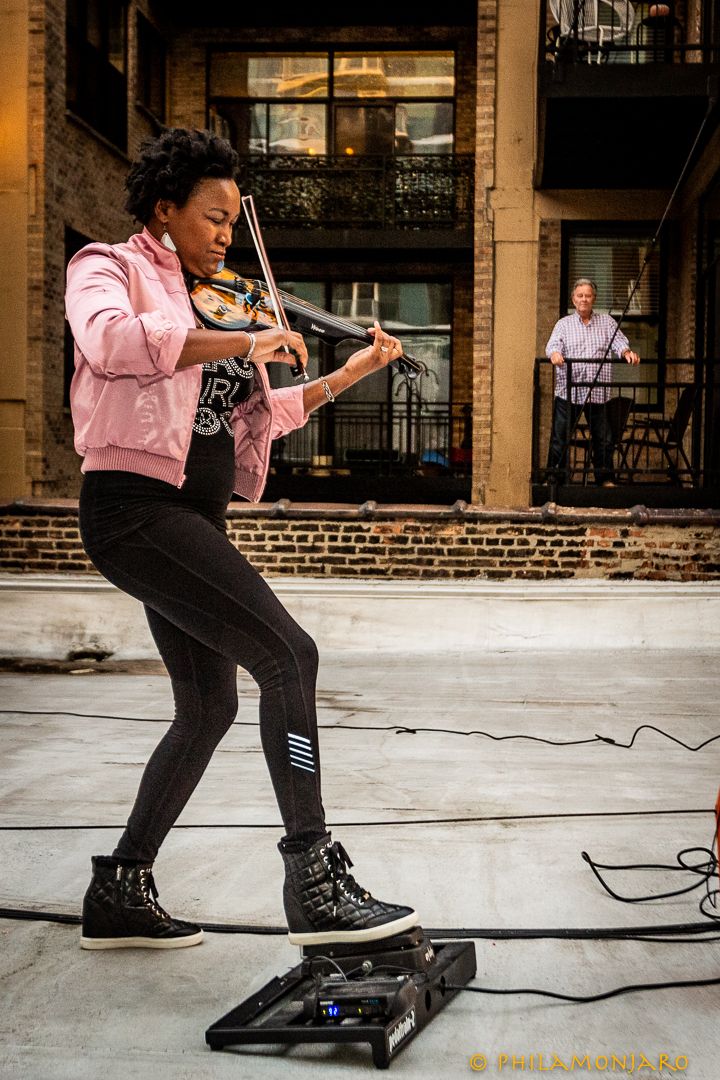 In classical music, you’re tied to the page. But at the solo gigs, you can create distortion, use a crybaby wah and a Marshall amp. 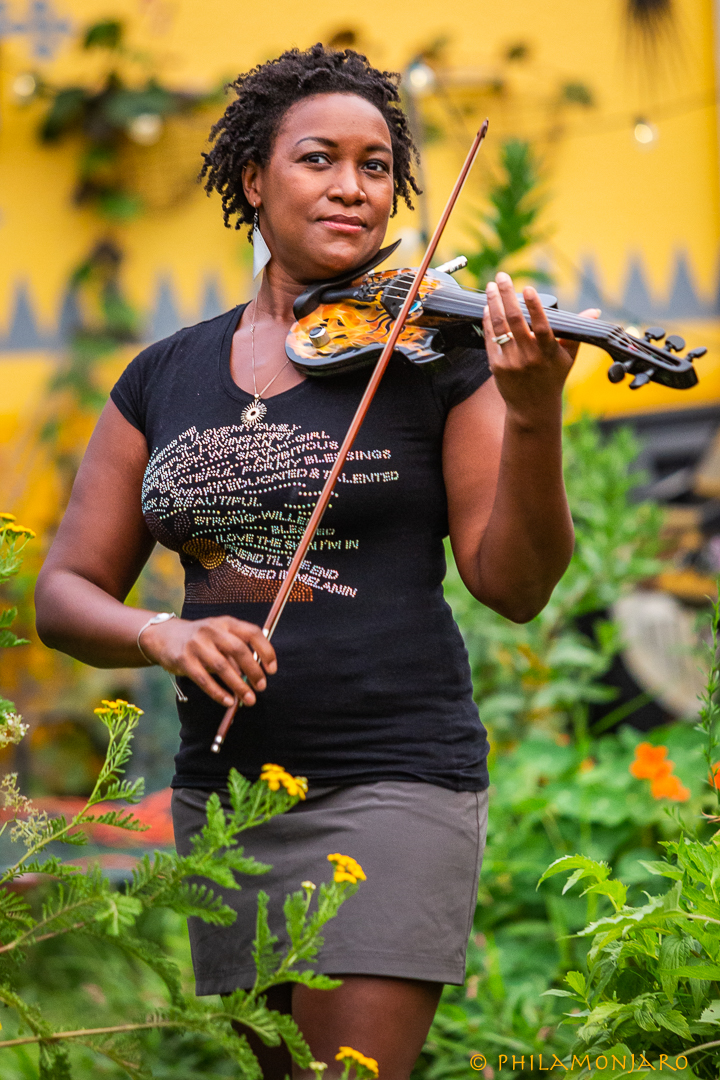 Playing in front of one, ten, or one-thousand, a packed house or an empty house, does the size of the audience change the game? No. Melanie gets charged up playing an intimate club, but then again, she does recall getting goosebumps from performing at Carnegie Hall. And at the House of Blues, “It was an awesome feeling to play in front of thousands of people; you’re at the center.” 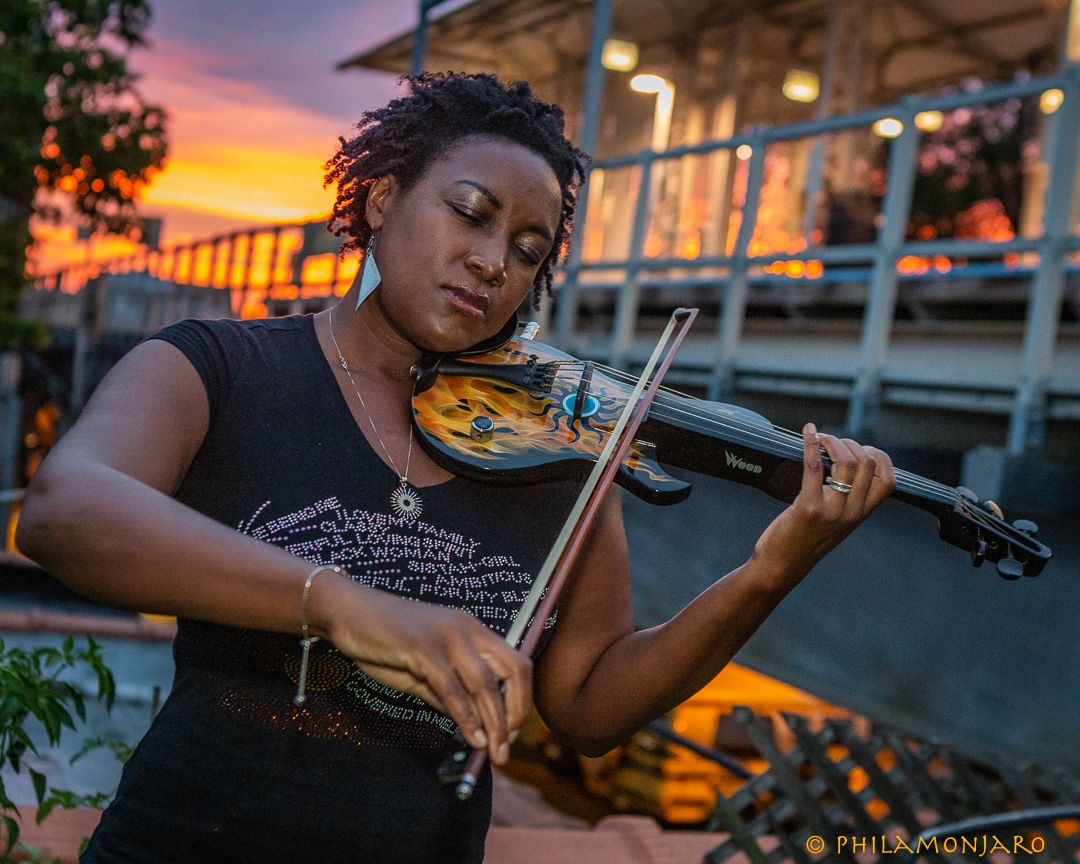 For some Chicagoans, lockdown means isolation, but South Loop violinist Melanie Sarapa strolls with violin on the veranda, balconies and rooftops jamming out to Jimi, her hero. 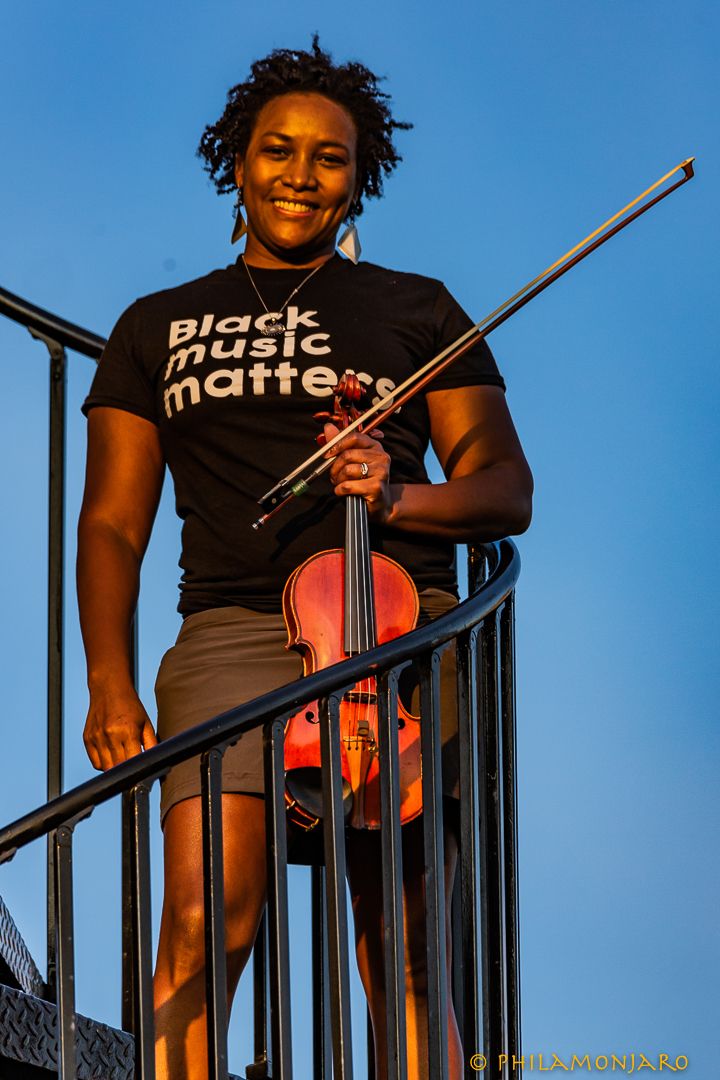 We played the black anthem, ‘Lift Every Voice and Sing’ at an informal George Floyd memorial on State Street. 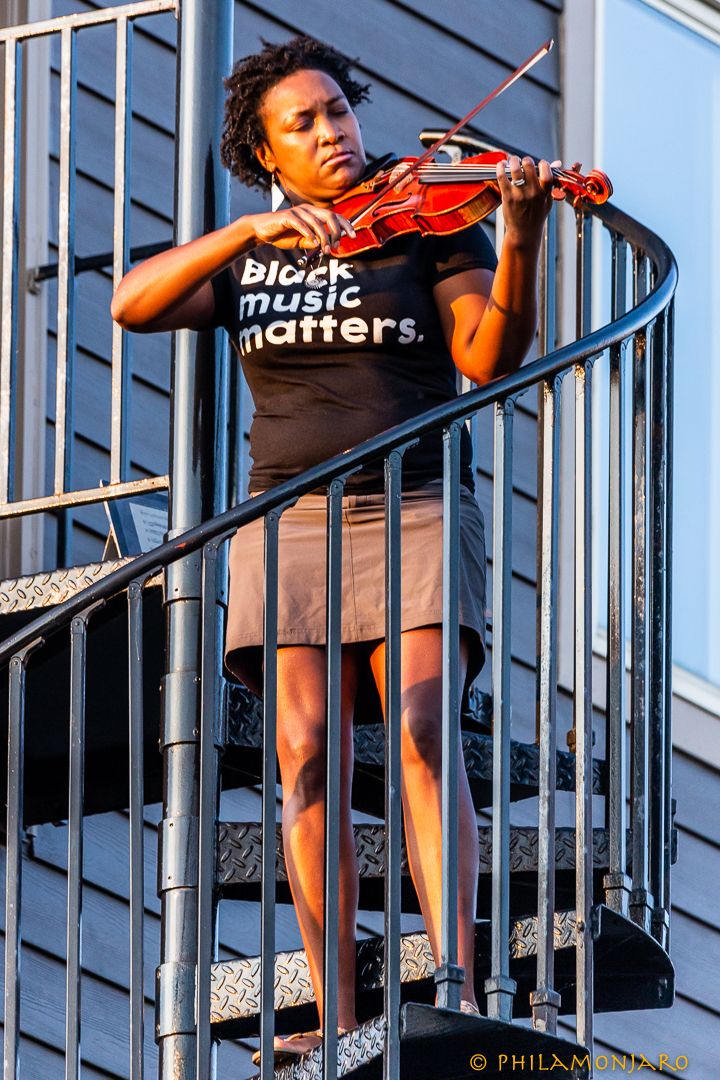 Then there was this galley stairwell on a neighborhood three-flat. I performed with the best summer sunset.