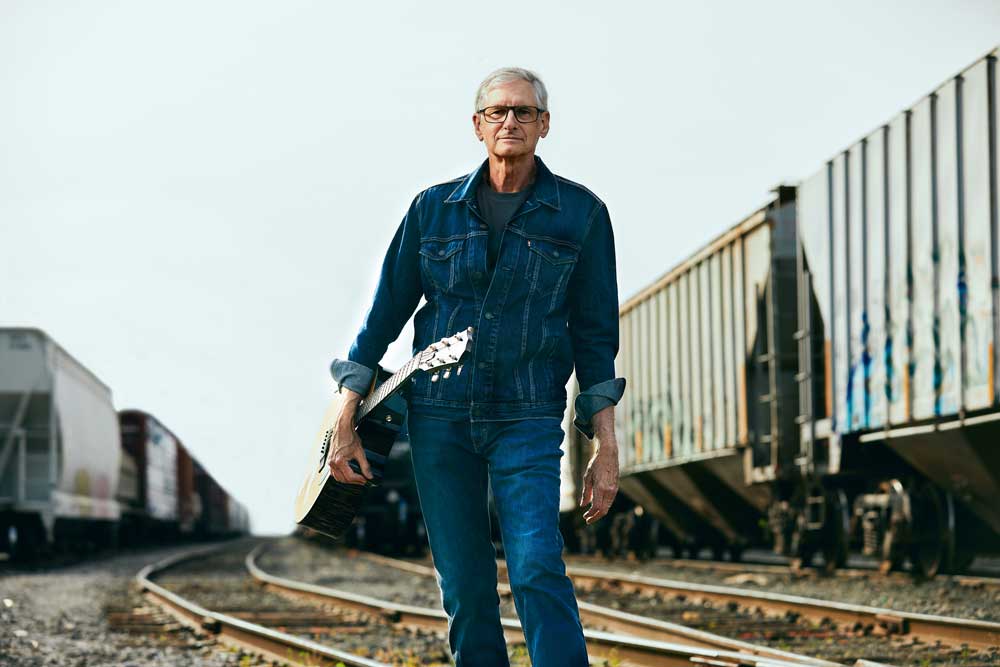 Starting a career as a performing musician after most people have retired to explore their hobbies gives Jim Stanard’s growing fan base a different perspective on life. He’s just released his second album titled Color Outside The Lines. In the title number he sings, “I dreamed that I go back and pick a path that I passed by/If I never take that path I’ll resent that I never tried.” 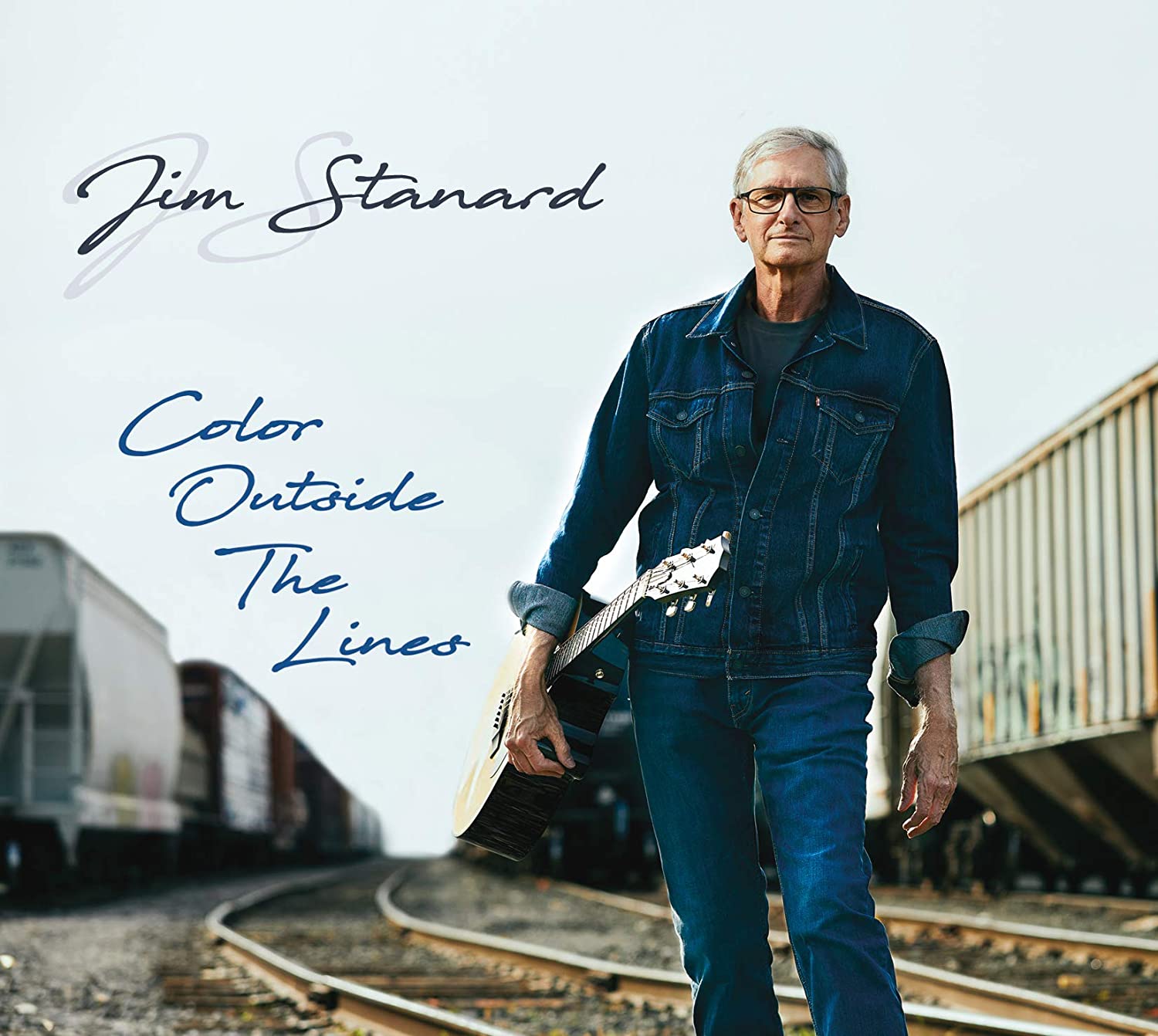 Stannard saw Dylan on his 1966 tour that was half electric and half acoustic. He dismisses the 1969 Woodstock Festival as a mud bath and claims the Atlantic City Pop Festival two weeks earlier was a better show. But he put his Martin D 29 guitar in the closet for decades while he pursued a career in finance and enjoyed a personal life with his wife. They’ve been married now for 45 years. When he finally decided to dust that Martin off several years ago, he had to argue with the luthier about adding a pickup for it.

“It was originally purely acoustic. The guy who put it in said, ‘Are you sure (you want to add a pickup)? It’s a nice old Martin. You’re gonna hurt the value of it.’ I said, ‘The value to me is to play it.’”

The guitar is worth thousands untouched. “Oh, yeah. It is,” Jim says, “but A: I want to play it, and B, it has a sentimental value. So, it’s not the kind of thing I’m gonna….”  He hesitates. “It’ll be my estate selling it if it even gets sold.”

Taking up music professionally in one’s 70s is doing just that, taking up a path that he passed by for a career in finance. But Stanard insists that his songs in general are not autobiographical. “I like to think I’m a writer of fiction,” he says. “My songs are not explicitly autobiographical, but I guess that one (“Color Outside The Lines”) is pretty darn close.” A year ago, he read Stephen King’s book on writing fiction. “I read it as a songwriter. It was recommended to me. I thought it was a wonderful book.”

“It’s funny. I was introduced to Peter probably three years ago, and it was through political interests we had. So, we got talking, and found a real common interest and became friends pretty quickly. I didn’t really push my music on him. We were more just friends around political stuff, but when I put the new album together, I particularly had a couple songs (“Home” and “Arkansas”) I wanted his judgment on. He told me he liked ’em a lot, and he offered to sing on ’em. I love Peter. He’s a committed progressive. I mean he really champions progressive causes. He also is very committed to stability and understanding and trying to bring people together. He’s a guy I can easily get along with.”

What sets Stanard’s music apart from artists like Peter Yarrow and other musical influences including Dylan, Warren Zevon, Springsteen, Robert Earl Keen and Jason Isbell is that while each of his idols put “normal” lives aside to pursue a career that seesaws between touring and recording, Stanard, on the other hand, has a lifetime of experiences more like those of the average fan of his music.

But he doesn’t take his new career lightly. “I rarely write a song in less than six months, and I revise it 16 times. I’m always fiddling with a word or a chord or something. I do a lot of revisions. Sometimes – it isn’t always the same – but oftentimes it starts with the title, and then I’ll come up with chorus, lyrics and an idea about what the chorus is going to say and sound like, and I’ll start putting some musical ideas around it and then write the verses.”

“Fake News” is a good example. It’s about a girl friend who’s a news girl on TV: ‘Can’t wait to turn her on when I switch to channel 3.’ That one is two years old because I wrote a version of it I didn’t quite like. I just didn’t like it, but I was encouraged by both (my mentors) Jon Skibic (the guitarist in Afghan Whigs) and (Winger bass player) Kip Winger because that was a good hook, and they encouraged me to go back to it. It was like sitting on the shelf for a year, and I went back and just figured out an angle that I was happy with.”

While many of his songs are not autobiographical, he’s sensitive to his wife’s concerns about lyrics concerning relationship issues. He chuckles. “There are a couple of songs that if my wife is in the audience I don’t play live because she doesn’t like them. She doesn’t like the breakup songs, so I don’t play the breakup songs: “Soft and Gentle Smile” or “One Time in a Row.” A friend of mine would say, ‘Yeah, you beat me one time in a row.’ It was just a funny little phrase a friend of mine used and when it popped in my head, I immediately wrote it down in my hook book.”

It does my old heart good to see someone my age applying a lifetime of experiences to new music that’s both contemporary and familiar in its use of acoustic and electric instruments. They say there’ll never be another Johnny Cash or Kris Kristofferson, but Jim Stanard draws from the same well of weathered experience. And he’s not freaked out about the world’s detours concerning the pandemic. “That which doesn’t kill you makes you stronger. My wife and I travel a lot, but I can’t wait to start performing again. So, I’ve actually been slacking off. I’ve been losing some of the calluses on my fingers. I’m still playing some, but I haven’t been playing as much. I gotta get myself back in performing shape.”

Order Color Outside The Lines