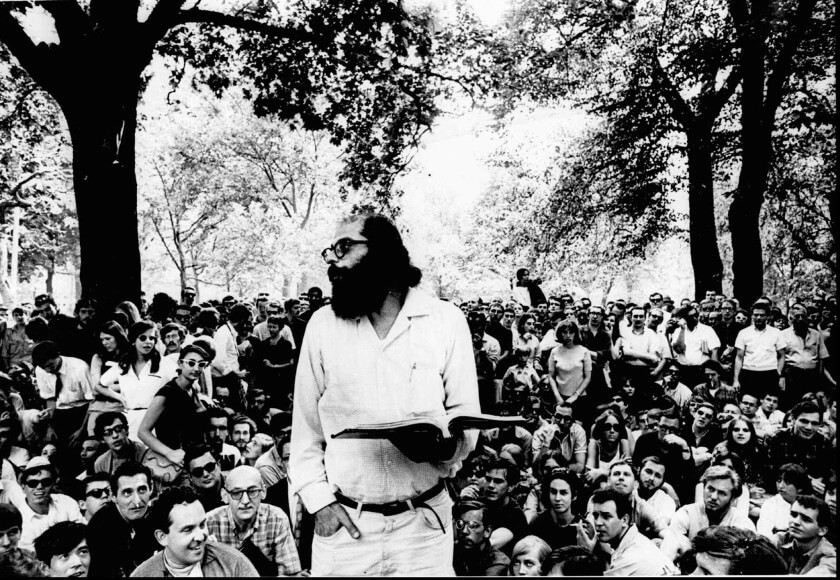 A tribute album celebrating the 50th anniversary of Beatnik poet Allen Ginsberg‘s The Fall of America: Poems of These States will feature musical interpretations from artists including Sonic Youth’s Lee Ranaldo and Thurston Moore, Yo La Tengo, Andrew Bird, and more.

Consisting of new musical versions of Ginsberg’s poetry from The Fall of America, set alongside recordings of Ginsberg recitations, the tribute also benefits voter registration non-partisan organization Headcount. Allen Ginsberg’s The Fall of America: A 50th Anniversary Musical Tribute is set to be released on digital formats on February 5 with CD/vinyl arriving June 4th.

“When invited to write a musical setting from The Fall of America, I chose the powerful final 16 lines of ‘Memory Gardens,’ adding some explanatory text at the beginning to make it more vivid. Ahh Allen, Ahh Jack!”

“For my Japanese reading, I tried to keep the tone much like the narration at the beginning of a dystopian film, or a parent reading a storybook of old stories to their children.

I am honored to be a part of such a wonderful project.”

“While most people tend to reflect the brightness of the era, Ginsberg didn’t shy away from the darkness. He writes the scene in all its complexity, the busts of excitements and Dionysian excesses as well as darker images, such as the sculpture of the hanged man. He forces us to recognize the children sleeping in the bed and the police cars parked outside, red lights revolving in the trees.”

Fall of America poems — published by City Lights Books in San Francisco — covers the years 1965-1971 when Ginsberg was zig-zagging across the country and narrating into the portable reel to reel Uher that Bob Dylan had gifted him.

“In 1965, Ginsberg began planning an ambitious project, a book of thematically connected poems, a collection that ‘discovered’ America in poetry similar to the way Kerouac’s On the Road had explored the country in prose,” explains editor of The Fall of America Journals Michael Schumacher. “The Vietnam War would be a constant presence overhanging Ginsberg’s travel writings like a darkening shadow affecting daily life in the country. It would be a study of contrasts: natural beauty slammed up against an ugliness that rose out of the tensions of violence. The public’s polarized dialogue over Vietnam and, earlier in the decade, the civil rights movement, convinced Ginsberg that America was teetering on the precipice of a fall.” – Michael Schumacher, from introduction to The Fall of America Journals 1965-1971.

8)    ethereal_interface – An Open Window on Chicago

17) The Good Ones (Rwanda) – Falling Asleep in America

18) Steven Taylor – Continuation of a Long Poem in These States

Vinyl Track Listing Side A:

Pre-order The Fall of America