Selwyn Birchwood’s Only Rule: The Song Has to Be An Original 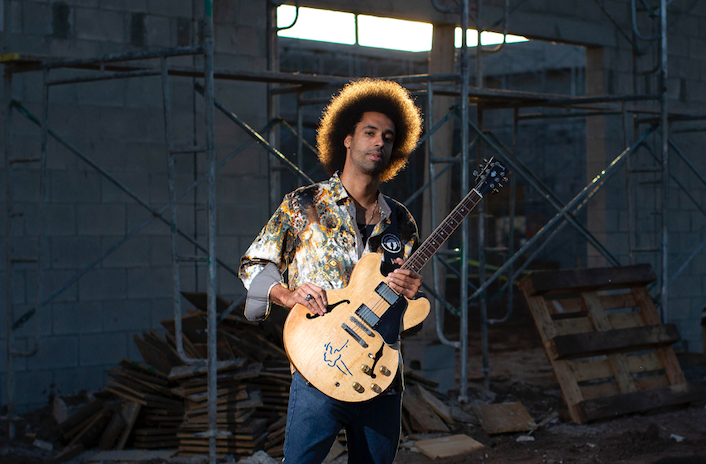 If anyone had any allusions that Selwyn Birchwood’s first Alligator album Call No Ambulance was a fluke, or that he simply dodged the sophomore album bullet on Pick Your Poison, his new album Living in A Burning House should eliminate all concerns.

This man is in it for the long term, and the personal history he brings to these 13 originals pushes the blues envelope just far enough.  Without throwing away the classic post-war electric blues influences, he brings his own background to the fore, assuring him a position in the blues legacy for decades to come.  Millennia to come if the world survives that long.

As interesting as it is that his dad is from Tobago and his mom from England, he says they weren’t particularly musical. “No, I grew up hearing now what you’d call oldies, I guess. At least when I was a child, they called them oldies. I’m not sure what they call them now. Sam Cooke in the house, Ben E. King and some Elvis, all the older doo wop stuff. My parents were older when they had me. It was kind of a mix of some of the older R&B and that kind of stuff. That’s really what I had in my head rather than the stuff my friends listened to.”

You can hear the thread from B.B. King to his own style in his guitar work, but It was Texas born electric lap steel guitar player Sonny Rhodes who gave Birchwood his trial by fire at age 19 when he played his first gig with the legacy artist. “It was an 86-hour drive to get to the first gig in Calgari, Alberta, and it took 89 hours to get back to Florida.”

Selwyn was in college at the time, but Sonny let him sit in any time he could get away. “(I said to him) ‘I don’t know why you have me on the way you do,’ and he said, ‘You remind me of me when I was your age.’ He just (saw) that I was in love with his music, and this was what I wanted to do, and he really wanted to encourage that and really respected that about me, and I’m glad I was able to have the opportunity to ride his coat tails at that time and learn all the aspects of the business at such a young age.”

Birchwood went on to earn a master’s degree in business administration and worked 13 years at a “dead end job” selling cell phones before he got back into music full time. He says his education had no direct influence on his muse, but it did teach him something about dodging bullets in the game of surviving as a musician. “I don’t think (my education) really did much of anything in a literal sense. I just feel people get caught up in the glamor or the glitz of just being on stage, and there are other aspects that have to be attended to, and if you don’t want to do it, you have to get someone else to, and so you can end up in a bad spot because people are still people, and a lot of people may be out to exploit and take from you.”

For the first time on Living in a Burning House, Birchwood brought in an outside producer, Tom Hambridge, the man who knows more about Buddy Guy than Buddy himself. While Hambridge has written or co-written most of Buddy’s best songs in the last decade including his signature “Skin Deep,” Birchwood says he himself had written all the songs on the new album before he brought Hambridge in. “I was pretty much sending him songs to get his feedback on them, and Tom is a guy I (listen) to what he’s saying because he’ll tell you the truth, but (Alligator CEO) Brue Iglauer is the same way. That’s the way I prefer to work instead of anybody that says you’re right all the time.” But Birchwood acknowledged that Hambridge is “magic” in the studio.

“I remember Joe Louis Walker telling me he had worked with him, and that he was great in the studio, and I asked him if he might be into it with the new album. He was actually very responsive, and he’s just an asset in the studio the way that he works and the way that he does things in the studio really helps make things more natural and more comfortable and more musical. And so, at the end of the day we wind up with a great product, and I think we come out with a record that sounds good and, more importantly, sounds like us.

Saxophone player Regi Oliver returns for a third time to play an unusually large role for a contemporary blues band. Birchwood recalls meeting him after being on the road with Sonny Rhodes. “I was trying to get my own thing together, and I was looking for a keyboard player and just couldn’t find the right thing. Regi was the only musician that I found that I enjoyed the way that he played, and I really enjoyed working with. We had a trio and then had a saxophone, a lone saxophone up until this year.

“We’ve only just added a keyboard player this year (Walter “Bunt” May). Recording this record was the first record I had a keyboard player on and was going on tour in 202l, but as everybody knows, 2020 had different plans for all of us, and we decided to just pick up where we left off, and get it going for this year. Now the band has a keyboard player and a saxophone. So, we’re out there rocking.”

He met Diunna on the Blues Cruise and then heard her perform at a so-called blues festival, the kind that packs the lineup with more rock than blues “because they want to use it as an ATM, but Diunna was just playing her own stuff, and it was just a really cool thing to be able to hear.”

“You Can’t Steal My Shine” is manic magic. Birchwood reminds me of Kenny Neal in the way he talks in the middle of that song.

Birchwood says “Through The Microphone” is autobiographical in that he admits the only time he feels at home is through the microphone. “Absolutely. That’s where I’m happiest on stage expressing myself through my music and happy that by doing that, people can relate. I think music is cool in that you can put yourself out there in the moment in the hopes that people in the crowd can relate, and in that way you don’t have to be alone, all of us being stuck in this human condition.”

“I Got Drunk, Laid, and Stoned” has that same edgy humor as Elvin Bishop. “He’s a good friend of mine. One of my favorite people out there for sure. A musician that spoke to me and telling me things. He’s one of the few that are still around that were able to get his lessons first hand from all of those guys in Chicago back in the day. It’s really a cool thing to hear, but I try and go back and dig up the records and dig up all the guys he listened to and learned from. I listen to all the same kind of stuff.”

Elvin Bishop had a full scholarship to the University of Chicago and blew it off. Birchwood went all the way through for a master’s. How hard was it completing a college degree when he knew what he really wanted to do as be out on the road like Elvin Bishop?

“I mean I was in an extremely dead-end job at what I was doing. Music has always been at the forefront and has always been my vision, but at that time it wasn’t enough to keep my bills paid, so I was holding a day job for 12 or 13 years before I was actually able to make a switch.”

Which comes first for Selwyn, the melody or the lyrics? “It’s always different. Sometimes I’m in the mood trying to write music and come up with ideas and trying to take care of what would make a good song. So, it’s always different. The only thing that’s consistent that I want to write my own. I don’t want to get up on stage and rehash what somebody else has already recorded. I want to get up on stage and tell my story. I feel that this new record is able to do that.”

Like most of us, the pandemic is wreaking havoc on Birchwood. “Man, it’s a very disheartening thing to not be able to perform. We’re living in a world at the moment where crowds are not able to gather, and I’m (used) to coming together in huge crowds. So, it’s a really disheartening thing to be dealing with at the moment. I’m pretty much looking forward to getting past it and getting back to doing what I love which is being out in person in the midst of those crowds and performing music.”

Order Living In A Burning House