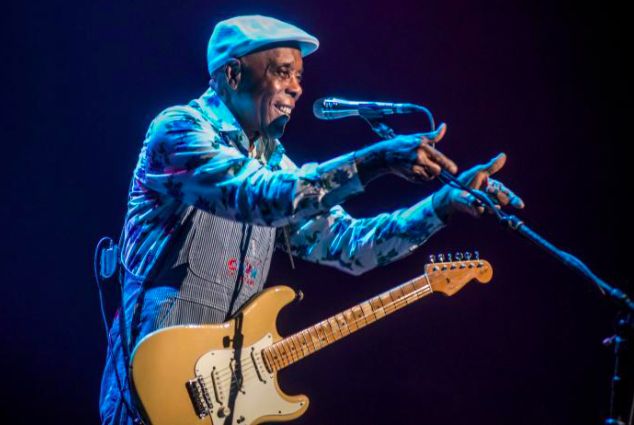 Frank X. Gallagher, the host of the podcast Soundman Confidential is on a mission to keep the magic of live music in the public’s imagination. Having graduated from roadie to the soundbooth, the legendary soundman mixed the live shows for some of the biggest bands in rock music, running tours, traveling thousands of miles on tour buses, and living the life of rock and roll.

Soundman Confidential finds Gallagher playing host to conversations with some of the biggest players and artists in the music business, opening up about their careers performing live, and how they see the future of live music, post-pandemic. Add to the lineup, celebrities and other artists recalling live music’s importance in their lives. Having graduated from roadie to the soundbooth,

To kick off the Season two, Frank speaks with blues legend Buddy Guy. Buddy’s influence on music is massive. Born in Louisiana in 1936, he headed north to Illinois to become part of the Chicago Blues sound with Muddy Waters and Junior Wells, and touring with B.B. King. Gallagher was Buddy’s tour manager and sound engineer through much of the 1990s. Buddy was remark inducted into the Rock and Roll Hall of Fame in 2005 and performed at the White House for President Obama and First Lady Michelle Obama in 2012.

On January 27th, Frank will be speaking with Scottish music mogul Alan McGee. McGee has been a record label owner, musician, manager, and music blogger for The Guardian. He co-founded the independent Creation Records label, running it from 1983 until its closure in 1999. He subsequently founded the Poptones label, running it from 1999 to 2007. Alan discovered an amazing collection of bands including Oasis, Primal Scream, My Bloody Valentine, Teenage Fanclub, and a whole bunch more.

Based in Arizona and California, Frank awaits the call to get back on the road with the band. He left his home village, Banknock, in Scotland, as a sixteen-year-old in the mid-1960s and has been taking his gypsy spirit across the world ever since. He hears music, not so much through his ears but his heart. It’s the Celtic in the man.

Listen to all archived podcasts