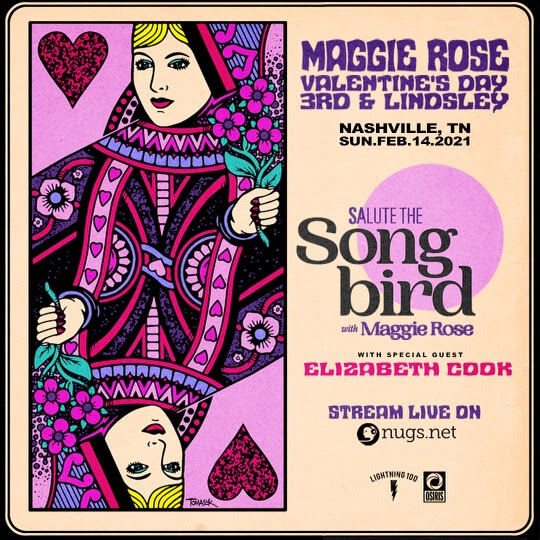 Nashville-based rock and soul singer-songwriter Maggie Rose is excited to announce a special Valentine’s Day live concert and livestream at 3rd and Lindsley in Nashville. The concert, featuring a full band, will open with a live taping of Rose’s new podcast, Salute the Songbird presented by Osiris Media, with special guest, singer-songwriter Elizabeth Cook.

Tickets to attend the socially distant concert are sold out, but viewers can tune into the livestream for free on Nugs.net and broadcast the event on AAA Station of the Year WRLT Lightning 100. Livestream viewers will also have the opportunity to make donations, with a portion of the proceeds going to Music Venue Alliance Nashville, a non-profit organization devoted to sustaining independent music venues in Nashville.

Salute the Songbird with Maggie Rose invites listeners into Rose’s world as an independent artist in the male-dominated, often volatile, music industry. She hosts candid conversations with her female musical heroes about their lives in and out of music, challenging the status quo, and changing the game for those coming up behind them.

On the special event, Rose says:

I can’t believe that I get to play a set full of new music for real people this month at one of my favorite venues in Nashville, 3rd and Lindsley! Even though the available socially distanced seating has already sold out, the show will stream for free on two of my favorite platforms, Lightning 100 for their Sunday night show and Nugs.net to sweeten everyone’s Valentine’s Day. AND, I have the honor of hosting the incomparable Elizabeth Cook for the very first live episode of my podcast, Salute The Songbird, which happens before our set and will also be available to everyone live on Lightning 100 and Nugs.net!

New episodes of Salute the Songbird are out every Tuesday via Osiris Media. The podcast features guests such as Grammy-nominated singer-songwriter Mickey Guyton, singer-songwriter Nicki Bluhm, Heart’s Nancy Wilson, Martina McBride, Chrissy Metz from This Is Us and other female musicians, songwriters, producers, and industry mavens who detail their triumphs, struggles and how they continue to succeed as women in the music industry.