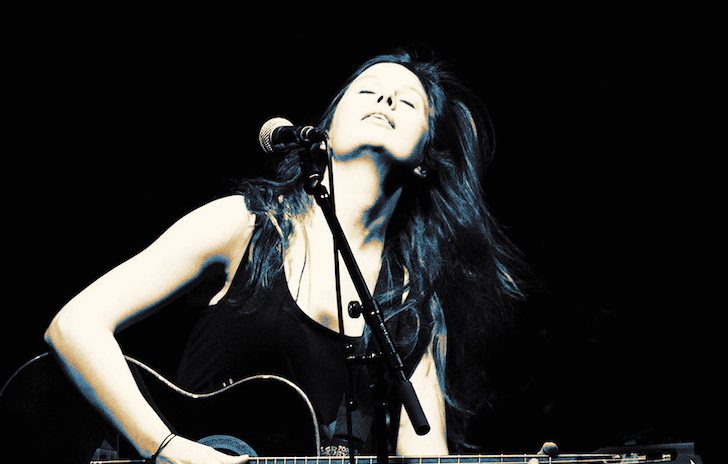 Liz Jones is renowned for her powerful yet honey-tinged vox and impressive vocal range but she added shrapnel to her repertoire with the explosive opener, “I Loved Another Woman,” the husky vocal tones reflecting the British blues boom of the late 1960s. Harp maestro Gary Martin contributed his trademark vibrato technique, supreme timing, phrasing and breath control to the mix on “Looking For Somebody,” his call and response with Liz adding a further dimension to the song.

Amazingly, Jones’ throat shedding vocals held out during “My Heartbeat Like A Hammer,” the band now in full swing courtesy of dynamic drumming by Pat McCann and the dexterous fingers of bassist Jennifer Clark. John Bruce showed why he is a world-class exponent of slide guitar, indeed any guitar, as he stretched every sinew in personal tribute to and admiration of Peter Green.

“Oh Well” was a brave choice for the setlist, but from the outset Liz exuded the dramatic tension of the lyrics with the band nailing the complex syncopated riffs and changes of pace and rhythm. Peter’s Splinter Group years were represented on “Look Out For Yourself,” Jones’ gravelly voice complemented by Bruce’s tasteful axe interludes. Jon MacKenzie’s guitar contributions both as lead and when dueling with Bruce were consistently innovative. It was not surprising, therefore, that he produced a show-stopping moment with “Man Of The World,” his anguished vocals a poignant reminder that this show was a tribute to a very troubled soul crying for help and unable to cope with success.

The mood lightened with “Coming Your Way,” Jon on vocals again, underpinned by a mesmeric, pulsating rhythm provided by Pat’s tom tom fills and some nimble djembe playing from Liz. A novel touch was the slowing down to a crescendo of guitars and harmonica towards the finale. The dreamy and futuristic “Green Manalishi” is often said to represent Peter’s sinking into mental illness as well as the shift from blues to prog rock. Liz put her heart and soul into interpreting this vibe and doing justice to this moment in time.  Peter despized fame and money, as evidenced by the lesser known “Showbiz Blues” but in the end it was an instrumental which brought both into his life. Fittingly, “Albatross” ended the performance as it had started, beauty lying in the simplicity of the guitar and not filling all the spaces, MacKenzie understanding this and creating the aura.

Over the next few months until the anniversary of Peter’s death there will be many musical tributes, some of which will be higher profile in terms of personnel. However, tonight’s online The Legends show organized by Edinburgh Jazz & Blues Festival will stand out because of the honesty and humility of the musicians. Ten classic Peter Green compositions played with emotion, integrity and respect by six of Scotland’s most talented blues musicians were a fitting celebration of the life and achievements of the universally revered ‘Green god.’