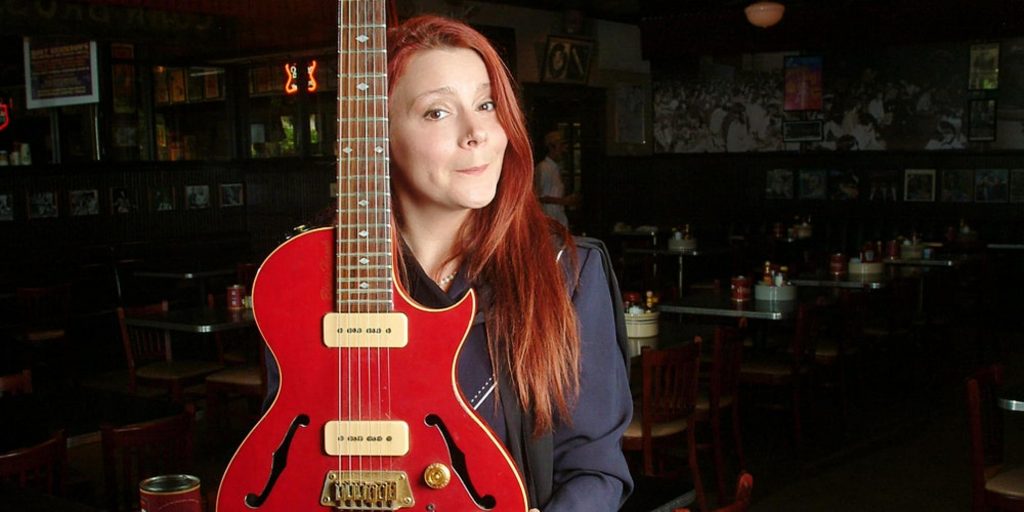 Alligator Records is pleased to announce the signing of Texas guitar slinger, singer, songwriter and multi-instrumentalist Carolyn Wonderland. Her music includes a bold mix of timeless original songs and reinventions of some of her favorites, ranging from blistering electric blues to deep, heartfelt ballads to cosmic country to soulful Tex-Mex. Every song is fueled by Wonderland’s forceful yet melodic Texas-flavored guitar work and sung with full-throated, heart-on-her-sleeve vocals.

She’s recorded ten previous albums under her own name, including four produced by famed musician Ray Benson, founder of multiple Grammy-winning band Asleep At The Wheel. Wonderland, who spent the last three years as lead guitarist in John Mayall’s Blues Breakers, now joins the Alligator Records family as the first female guitar hero in the label’s storied 50-year history. Her spine-chilling, soul-deep vocals match her guitar prowess note for note. And she has a knack for writing songs that sound like instant classics. Her Alligator debut will be released later this fall. 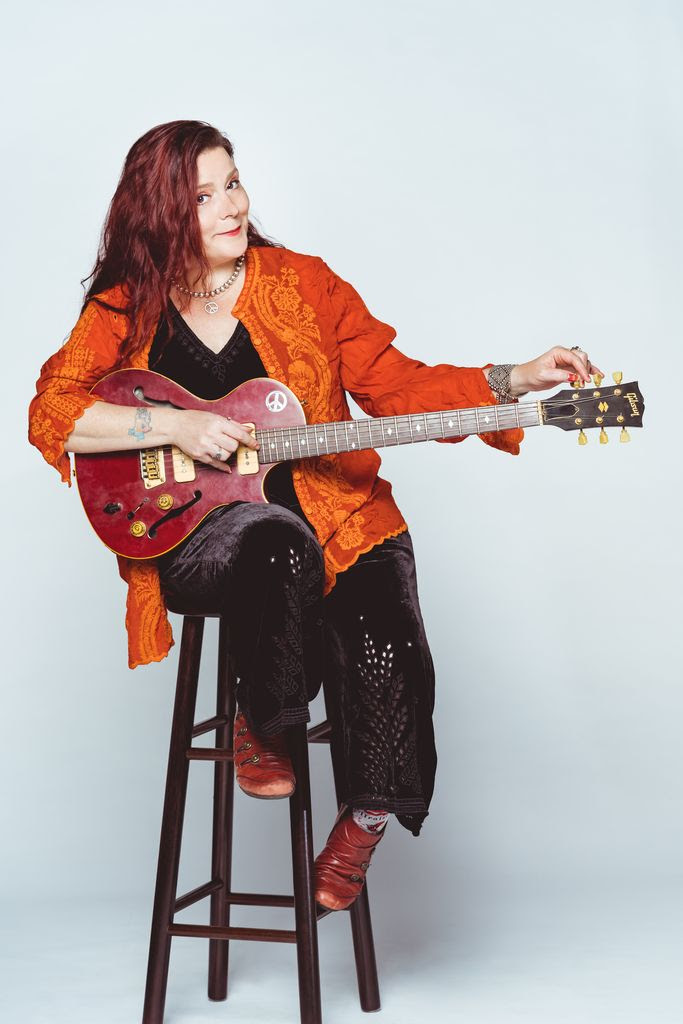 Wonderland grew up in Houston in a house full of music and instruments. She first starting making music at age six, and by eight had decided, in her own mind, that she was a musician. After she scratched up her mother’s vintage Martin guitar by imitating Pete Townsend’s famous windmill move, she was forbidden from using a pick. Because of that, she developed her aggressive, distinctive finger-picking guitar attack. Her early influences include her mom, Houston guitar legends Albert Collins, Jerry Lightfoot, Joe “Guitar” Hughes, and Little Screamin’ Kenny, as well as blues and soul vocalist Lavelle White. Singing came naturally, as did learning to play just about every instrument she got her hands on. She plays trumpet, accordion, lap steel, piano, and mandolin. She’s a renowned whistler, too.

By age 15, she was performing at Houston’s famed Fitzgerald’s club, playing solo or with friends. As a 16-year-old, she found herself swapping songs with Townes Van Zandt. She formed her first band when she was 17, and began proving herself on the tough, competitive Houston club scene. A year later, she joined forces with famed Houston musician Little Screamin’ Kenny and formed The Imperial Monkeys. Before long, Carolyn Wonderland And The Imperial Monkeys were swinging high on the vine, touring as far as Utah, New York and South Dakota, and winning every music award Houston had to offer. A booking at Austin’s famous Antone’s club left a strong mark on Wonderland, who moved to Austin in 1999 at the urging of Doug Sahm (who told her, “it’s the land of free guitar lessons”). For two years she traveled with her band in her van, and stayed with friends in Austin and on the road, trading chores for meals and lodging. “I wasn’t home-less,” she says. “I was van-full.”

Wonderland released Alcohol & Salvation in 2001 on a tiny local label. The self-released Bloodless Revolution followed in 2003 and brought her new fans, along with local press and radio attention. Her growing reputation as a hotter-than-fire live performer kept her touring calendar full. Then one day in 2003, legendary musician Ray Benson was having lunch with his friend Bob Dylan, who had heard Wonderland’s music. Dylan asked Benson, “Hey, have you heard Carolyn Wonderland? She’s something else.” Dylan wanted to meet Wonderland, so Benson got her number from a mutual friend and called her in Houston, telling Wonderland to get to Austin immediately to meet Dylan. She drove the 165 miles in record time, and they had a great time jamming that night. They’ve crossed paths since, sometimes jamming, sometimes just talking about music (“he’s a real musicologist,” she says of Bob). Dylan once asked Wonderland to write bawdy answer lyrics to his already-ribald Leopard Skin Pill Box Hat, and all but fell over laughing when she played the newly rewritten song for him. “Sometimes he’ll just call,” Wonderland says. “I haven’t changed my number.”

According to Benson, who went on to produce four highly regarded albums for Wonderland, “Carolyn’s got that unbelievable, incredible voice, one of the great voices of our times. She’s got the range, the emotion. She’s also an incredible guitar player and a great person. The combination is disarming and totally real. That’s magic.”

The popular and critical response to Wonderland and her music has been nothing short of amazing. She’s appeared on Austin City Limits, NPR’s Weekend Edition and NPR Music’s Mountain Stage. Features and reviews have run in publications from The Los Angeles Times to The Boston Herald. Her music has been heard on FOX-TV’s Time Of Your Life and on NBC’s Homicide. She appears, playing on stage alongside Bonnie Raitt, in the film The Road To Austin. She’s won multiple Austin Music Awards and was inducted into the Austin Music Hall Of Fame in 2020. She’s jammed with musicians including Buddy Guy, Johnny Winter, Willie Nelson, Kris Kristofferson, James Cotton, Los Lobos, Vintage Trouble, Robert Earl Keen, Ray Wylie Hubbard, and Levon Helm. Helm invited her to begin all of her tours with a performance at his famous Ramble in Woodstock, New York. “He always refreshed and recharged us before we hit the road,” Wonderland says.

In 2018, legendary musician and bandleader John Mayall chose Wonderland to be lead guitarist in his band, The Blues Breakers. She became the first woman to ever hold that position. (The all-star list of Mayall’s legendary guitarists includes Eric Clapton, Mick Taylor, Peter Green, Coco Montoya and Walter Trout.) She toured the world with Mayall, once playing 50 shows in 60 days in 19 countries. She’s also played with her own band all over the U.S. and in Canada, Mexico, Brazil, Panama, the Netherlands, Belgium, Germany, Spain, Italy, Austria, Slovenia, Canary Islands, Norway, Sweden, Finland, and Japan.

Wonderland married her husband, humorist A. Whitney Brown, in a ceremony on Austin’s Doug Sahm Hill, performed by Michael Nesmith of the Monkees, and documented by The New York Times’ “Vow” section. Nesmith, who had previously produced a song for Wonderland on her Peace Meal album, says, “When she goes into that mode where she decides to grab the heart of the song and hold it up for everybody to see, it’s just so searing. Nothing can be this raw. Nothing can be this real.”

The Boston Herald describes Carolyn as “a dollop of Janis Joplin, a slice of Stevie Ray Vaughan, and a big load of soulful individuality. That’s Wonderland, a seething-hot Texas singer-guitarist. And she can write, too.” Wonderland is excited to get back out on the road and reconnect with her fans and friends. “We will play dang near anywhere that’ll have us,” she says. Of her chosen profession, the effervescent Wonderland told NPR Music’s Mountain Stage, “I wouldn’t recommend it for the faint of heart, but it sure is a good time.”