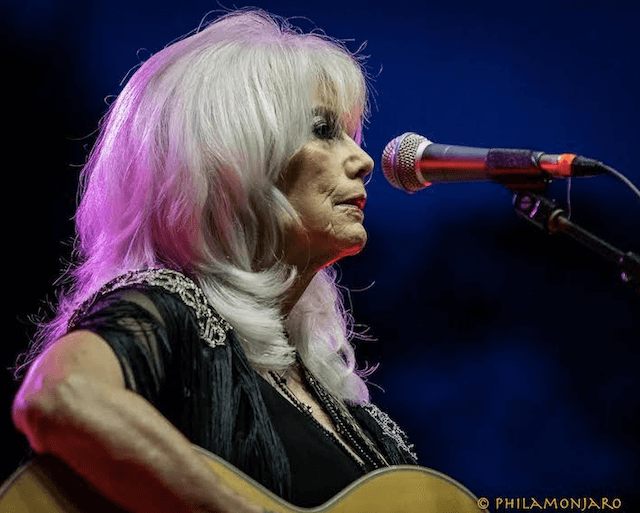 Emmylou Harris started out strong. Her beloved hit, “Here I Am” doubles as one of her most well-structured ballads. Against a truculent beat, she stormed: “I am standing by the river, I am searching for the truth,” strumming warm chords on her acoustic, surrounded by mandolin, guitars and a strident rhythm section. The descending bass line ballad was one of the elements that made this a grounded opener, as well as the shimmering harmonics and call-and-response harmonies.

The heartbreaking narrative of “Orphan Girl” followed: “I am an orphan on God’s highway but I’ll share my troubles if you go my way.” Harris made sure such sensitive lyrics were genuinely conveyed. She referenced Los Lobos when proclaiming that it was “a night of accordions” as her own band member stretched out a beautiful solo.

It didn’t take long for Harris to connect with her audience: “What a beautiful sight you are! You’ve all been vaccinated and you look good.”

When reaching back into American folk archives, she crooned “Wayfaring Stranger,” this time accompanied by steadfast strums and keyboard trickles. After revealing a dramatic tear in her voice, she stood aside to enjoy a short keyboard solo, plus titillating mandolin and violin solos.

Harris revealed: “My childhood was too happy and doesn’t make for good song lyrics, so I had to make things up…” before singing about her Birmingham, Alabama roots. The simple mandolin picking spiked up this coming-of-age story.

But Harris was quick to add that sometimes a songwriter has to “write a song to tell someone else’s story.” This impassioned original was influenced by fourteen-year-old Chicago-born Emmett Till who was lynched in Mississippi in the 1955 during a civil rights event. “I was just a black boy; never hurt no one,” she sang, effectively using first-person in the detailed narrative.

That said, Harris’ set included the influence of multiple, legendary ghosts of the past, with nods to Robert Johnson, Sam Cooke and Hanks Williams, Sr. on “Raise the Dead,” also covered by vocalist Linda Ronstadt, among others, which has demonstrative lyrics that found Harris vocalizing with both head and chest voice in succession.

The band conveyed an old-timey feel here, with down-to-earth lyrics, simple strums and freewheeling banjo. Harris shared that the song began as a Bill Monroe instrumental.

“Get Up John (the Baptist)” was soulfully satisfying with its driving, upbeat timbre and references to rambling, winning and losing.

Harris sounded as vibrant and youthful as a Grand Ole Opry headliner.

The cover of “Ooh Las Vegas” by songwriter Gram Parsons told the story of a “poor boy” hitting the “crystal city” and feeling overwhelmed. This one featured a wild fiddle solo and pronounced hits off the standup bass. The contrasting, a cappella “Bright Morning Stars” featured striking harmonies.

It was on to “Goodbye,” penned by colleague Steve Earle. Harris sounded appropriately vulnerable, when documenting the songwriter’s earnest recollection of faded love. Harris affectionately said of her peer: “God bless him and his foul mouth.” The extended electric guitar solo was a compelling touch.

“One of These Days” was a stark return to solid country roots, where lyrics about “chopping wood” and fantasizing about a simpler future reigned, and where the band contributed richly, but on “Wheels,” Harris focused on a more spiritual path: “I’ll turn to him who made my faith so strong” and allowed room for extended solos.

The meditational “Luxury Liner” is about a “long lost soul” and a physical place in which loneliness presides; the lead guitar and fiddle solos vastly enriched the pure, emotional landscape. 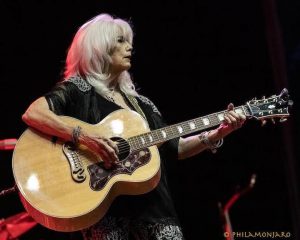 In another lure to a tear-stained tradition, Harris broke into “Together Again,” where her range was the celebrated artist. She ended this ballad on a big note.

Other highlights: “Red Dirt Girl,” a beautiful portrait of disillusionment alongside old friendships and the Townes Van Zandt cover, “Pancho and Lefty” about a “bandit boy” and “Lefty, living in a cheap hotel.”

“Save the Last Dance for Me” featured skilled accordion and trailing keyboard riffs, along with a booming bass line.

Guitarist Will Kimbrough, Fiddler Eamon McLoughlin, drummer Brian Owings and bassist Chris Donohue did an excellent job framing Harris’ Repertoire — no small task, considering the spectrum of moods involved as well as the high level of interaction expected from song to song.

Harris, being the final act, allowed for several encores, including Delbert McClinton’s upbeat “Two More Bottles of Wine” and the haunting, road-trip “Boulder to Birmingham” (co-write with Bill Danoff) from 1975’s Pieces of the Sky, where natural beauty: “I was in the wilderness and the canyon was on fire,” and longing: “I would walk all the way from Boulder to Birmingham if I thought I could see your face,” mercifully co-exist. On this first night of “Out of Space,”

Harris covered the expected bases, yet did so much more.