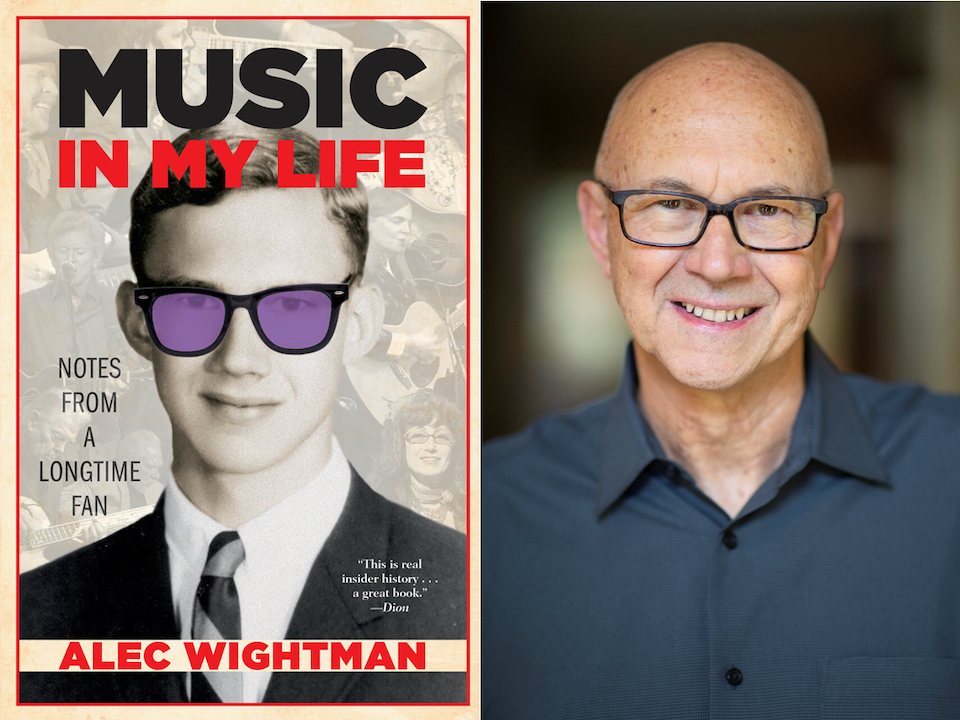 For almost half a century Alec Wightman has led three lives that make his memoir Music In My Life: Notes From A Longtime Fan (Small Batch Books) a fascinating read. As a teenager, he became a staunch fan of singer/songwriters of all popular genres. As an adult he became a promoter of the artists he loves with hundreds of successful shows under his belt. But most uniquely, he’s been working on the evolution of The Rock and Roll Hall of Fame as the Chairman of the Board. Throw in the fact that he’s high-powered corporate lawyer to boot, and you have a peek into a world unequaled by any other music journalist in the world.

He was concerned that his memoir would be too much about “me” and not enough about the “artistes” as he called those performers he presented at various venues in and around Columbus, Ohio.

The project started simply for his brother to read until the pandemic hit. “I wasn’t looking to write an autobiography,” says Wightman.” I went back to work on it when the pandemic hit. I actually edited and took a lot of stuff out. It was not designed to be an autobiography. I tried to capture the music in my life. I went back to work on it as a conscious effort.” 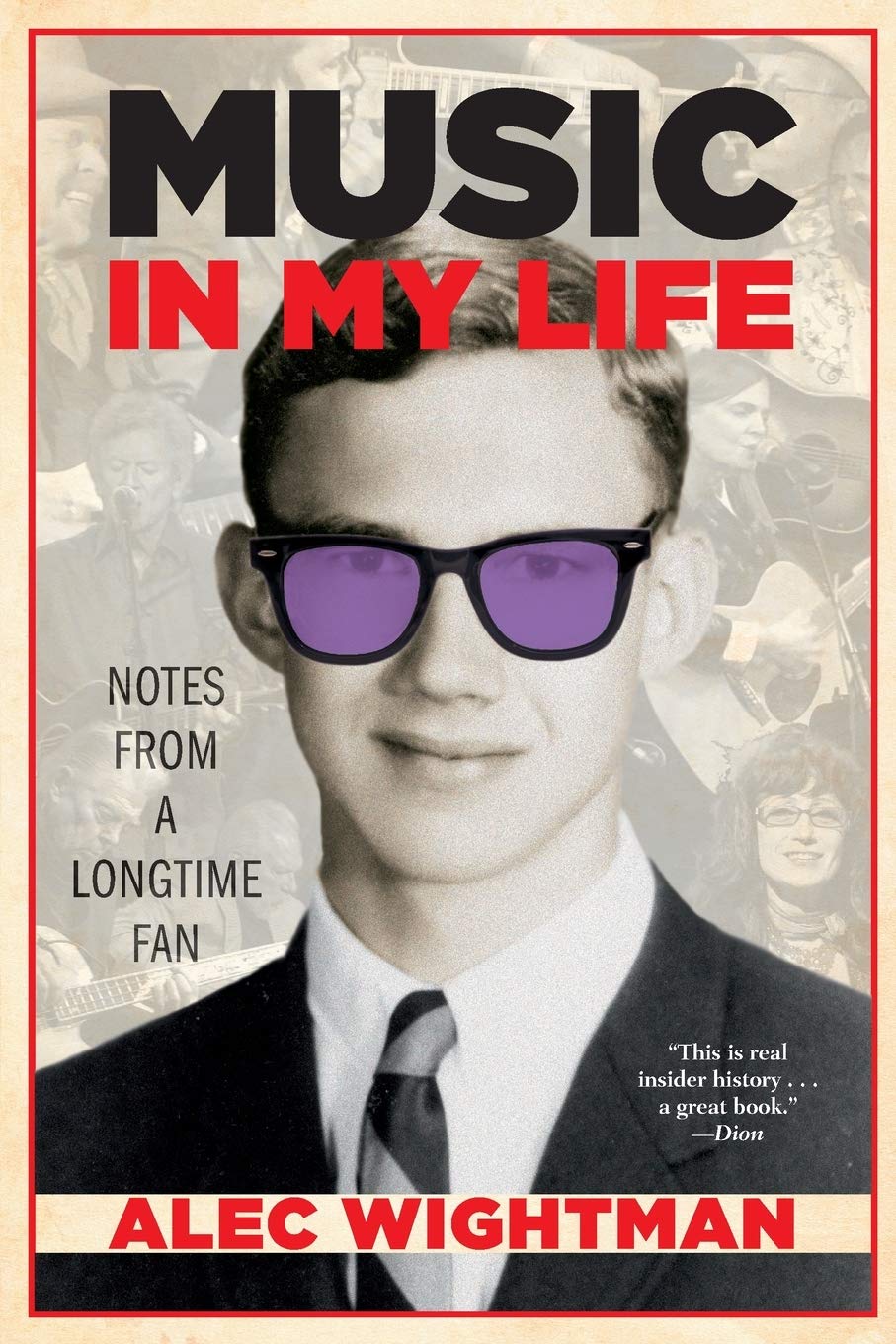 Before becoming a lawyer, Alec for a short time was a reporter for a local newspaper in Ohio. Now, after more than 40 years as a lawyer, he writes his first book, a tell-all memoir about the music business from multiple informed points of view.

When I called him, he’d just gotten out of a Zoom meeting with the Rock and Roll Hall of Fame Finance Committee. The pandemic has created a pent-up demand in music fans to indulge in their love of the music. “People are spending a lot of money at the Hall.  Traffic is way up.”

“I got done writing in early May last year. I had 56 snippets that became 14 chapters and a potential book. The only reason I’m doing this is for fun and this is fun.”

He comes from an era in journalism when rock critics were discouraged from using the word “I” in their columns. But if you’re a functioning cog in the wheel or, more significantly, the fuel running the engine of the business at the Rock and Roll Hall of Fame, you can be forgiven for indulging in personal recollections. After all, the Hall of Fame has, in fact, become The New Testament in the Bible of pop music.

Think of it this way, the average music journalist is a driver of a Chevy on a winding road with dangerous twists, turns, and potholes. How does the average music “critic” compare to a journalist/promoter/lawyer who has spent decades on the inside of the music business? Compared to the average rock critic in his Chevy, Wightman is negotiating music’s twists and turns in a Lamborghini and has been navigating the route for a lifetime. Put on your safety goggles because, as Mae West most famously said, we’re in for a bumpy ride.

Music In My Life has three mostly separate and disparate sections. The first is an incredibly detailed reflection on Alec’s taste in music during his formative years in college and grad school. Some of his favorite acts early on were Dion, Tom Rush, The Blues Project, and Jesse Winchester.

A second part offers a primer in how to promote shows by artists most people in Ohio had never heard of, many singer/songwriters like Eliza Gilkyson, The Flatlanders, Jimmy Webb, John Stewart, Jesse Winchester, Tom Russell, Rosie Flores, Dave Alvin, and Chuck Prophet. His secret? Book only those acts he’s seen and loves and build a reputation for presenting incredible shows by “artistes.”

The third portion is an insider’s revelations of the twists and turns the board of directors have taken at the Rock and Roll Hall of Fame. Wightman takes the reader inside for a close look at Rolling Stone founder and Hall of Fame principal Jann Wenner and others who have given rock and roll a credibility based as much on art as it is numbers of products sold.

I’ve been to this Cleveland institution five or six times. What a fabulous history it has to tell, and it does it with finesse, accuracy and both visual and audio excitement. To have someone writing about this who is such an important part of its growth is unique. Wightman has played an essential role in an organization that gives credibility to a genre of music dismissed as child’s play in its origin 70 years ago, but has become the showcase of America’s contribution to worldwide culture.

First of all, as a fan, Wightman remembers dates of concerts, the songs the artists played, and the albums that made their careers covering nearly a half century of music.

Second of all, he’s a promoter. And again, not just any promoter. He calls all the performers he books artistes and only books those that he personally loves. Filling halls of various sizes in Columbus, Ohio with artistes most casual radio listeners have never even heard of and selling them out is a trick that he describes in minute detail.

Perhaps most interesting is that as a corporate lawyer and former chairman of the board of directors at the Rock and Roll Hall of Fame, he’s not afraid to delve into the intrigues of Hall of Fame politics, and he names names.

Just reading his observations is a vicarious thrill worth the price of the book. This is a man who spent most of his 70-plus years rubbing shoulders with everyone from Dion to Neil Young. Not to mention he’s attended a jaw dropping number of the most memorable festivals, concerts, and Hall of Fame Awards ceremonies in history.

To say that Music In My Life is an informed read is an understatement. Wightman brings to his memoir a lawyer’s attention to detail and a promoter’s understanding of the often-rare combination of artists with both talent and a viable fan base for that talent. Add to that his finger on the pulse of The Rock and Roll Hall of Fame that is both a museum and living experiential rush, and you have a real page turner.

Order Music In My Life