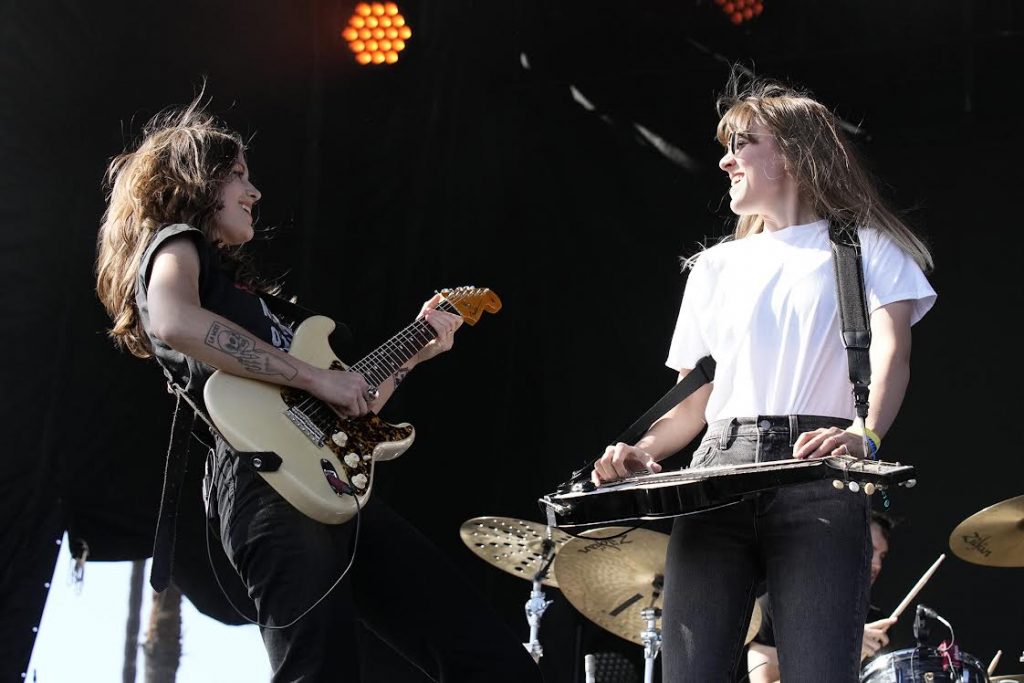 Sun, sand, perfect weather, beautiful people, good food. Oh, and great music of course. How bad could this be? I have covered my share of music festivals and this one ranks near the top. BeachLife Festival at Redondo Beach, California had everything you could ever ask for, four stages placed strategically around, showcasing some great jams over a three-day weekend. The food and drink were amazing, lines seemed to be short and moving fast. Beach tacos and seafood were the popular taste of the weekend. Pizza, grilled cheese sandwiches and fantastic BBQ were also available. I could not taste everything, but it looked good — spread out around the grounds making it easy to locate.

The festival provided games, from ping pong to cornhole, life-size red Solo cups had folks drinking, laughing, and dancing. A big shout out to Katie Henley and her peeps for making this a very organized event for us media folk. The festival seemed to be very organized and clean for the entire three days, from every aspect: the entrance flowed quickly, clean bathrooms, lockers to rent, a ton of food choices, and games.

Most of the tickets are general admission, but they do sell private suites that are just perfect for viewing, with shade, your own bathrooms, and of course food and drink. The BLF was a sellout, selling almost 10k tickets a day. There were just over 50 bands, with a little taste of everything from country to blues. This was the third year being held, and a huge hit.

Day one: For those guests who didn’t know Larkin Poe, they do now. What an impression they left. The two sisters Rebecca and Megan Lovell rocked the grounds with their blues and rock that really had the place talking for the rest of the day. I think everybody wanted to hear more. Maybe next year they can slide up to a longer set slot on the schedule. Next, Tomorrow’s Bad Seeds and Save Ferris — nice little following with these guys. Lead singer Monique Powell demanded everyone stand with her witty humor and looks. This Southern Cal punk band brought it.

Silversun Pickups, a fan fave, kept things going until The Revivalists all the way from New Orleans (please say a prayer for all friends from NOLA) had everyone up dancing. Cage The Elephant, another fan favorite, set the way to the last show of the night, Janes Addiction. JA was a perfect way to end day one and send the people home with one great day of music. Most of the fans and vendors stopped to watch these guys rock it out till closing time.

Day two: Yachtley Crew, a cover band that had quite a following for the early 11 am start, really rocked the house — captains hats and all. This set the tone for the rest of the day. I heard someone say “I don’t normally like cover bands, but they rocked”. English Beat and Sugar Ray followed one after another. With their respective fanbase, they kept things jumping. CAM came out singing her amazing country tunes that showed all genres of music was fit for the BLF.

Jakob Dylan and The Wallflowers performed right after; I noticed a lot of CAM fans ran over to watch The Wallflowers. A slower, bluesy sound that the BLF fans embraced. Dylans’ voice just won over the crowd for the next hour and a half. Men at Work was one band I couldn’t wait to see. Colin Hay, founder/lead singer/guitarist, led his band into what I thought was just an amazing set that could have been the act of the day. Most of the BLF fans were at the Hightide stage to listen to the men from down under bring it. I witnessed almost ten thousand people singing along with Hay for almost every word. “Who Can It Be Now” alone was worth the price of admission for Saturday’s lineup. Counting Crows closed out the day with another packed house at the same stage. Everyone danced away the night with no sign of slowing down, another perfect ending to this kick ass lineup for the weekend.

Third day: The final day of BLF, bummer. I don’t think anyone wanted it to end. Brett Dennen I have never seen, but I loved his style. He started what I thought was the best lineup of the festival. Melvin Seals & JGB continued the great vibes with their amazing sound, keys, guitar, etc. G. Love and Special Sauce, a local favorite with the folks kept a high energy feeling going with a great setlist, including Eric Krasno and Donavon Frankenreiter sitting in for one at the end. Fortunate Youth and Thievery Corporation continued to close the afternoon sets before blues legend Gary Clark Jr. took the Lowtide stage by storm. Clark with his raw, deep blues sound had a lot of people guitar gazing, which is a compliment and a half to any ax player. Just because the crowd wasn’t dancing in their spot doesn’t mean they weren’t dancing inside. Clark set the tone for the final hours of the Fest.

Portugal the Man came next with their high energy sound and smoke show that brought the crowd back up to dancing and rockin’ out. Ben Harper… What can you say about this legend? How can you have a beach festival and not invite this guy? Harper started out with his high energy drumming and playing with his Signature Model lap steel guitar, before bringing us back down for a second with “Burn one Down.” Most sang word for word with this tune. Harper then introduced one of his close friends and brought out Ziggy Marley, performing “Spin it Faster,” a new tune the two wrote together. The encore act: Ziggy Marley, with brother Stephen Marley. The Marleys, playing their fathers’ jams, just brought the island sound to its knees with hit after hit. What else do you want to hear after the sun sets on the beach? Reggae at its finest with royalty.

After three days at Redondo Beach, I can honestly say I didn’t want to leave. The BeachLife Festival was pretty amazing. I hope they have us back next year. I could go on talking and talking about the acts, as the lineup seemed to just flow. Again, I might have wanted to hear Larkin Poe play longer, watch Marley and Harper jam a couple more songs together, or have Eric Krasno get his own slot (hint, hint). I’m not complaining, just California dreaming. Overall, the music, the food, prices, cleanliness… Compared to others, this is a keeper.

Full photo gallery below. All images by Rick Scuteri.