Dion Becomes The Godfather of Rock on ‘Stomping Ground’ 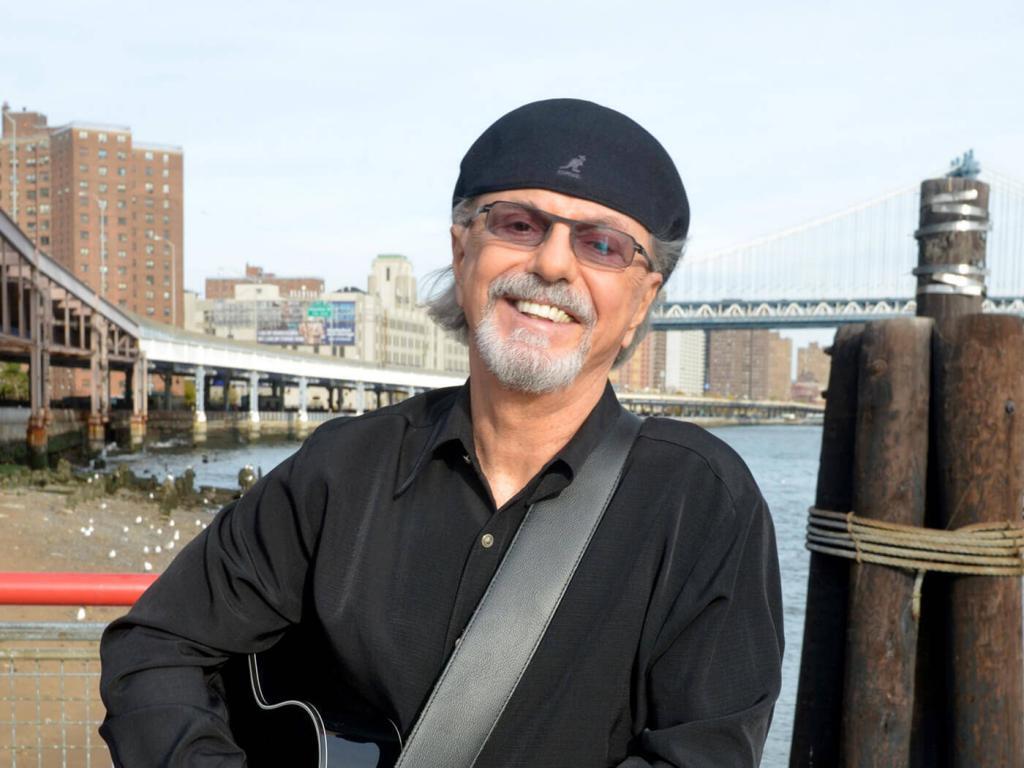 “I’ve never felt so embraced by the musical community,” says the man who first broke into the music business as a teen idol in the mid-50s with his hit” The Wanderer.” 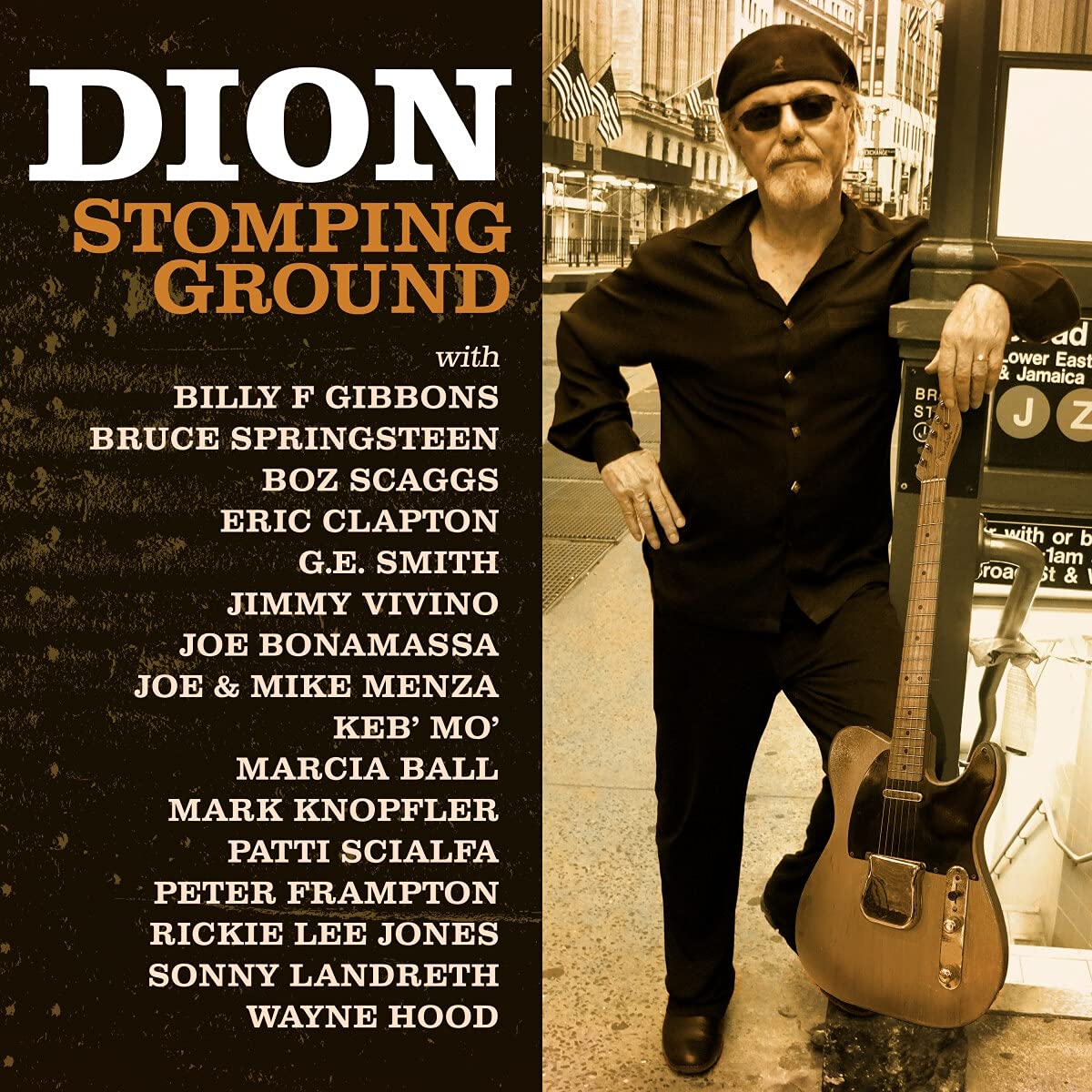 Dion has amazingly little ego for someone who’s had the kind of impact he’s had over so many years and in so many styles. The variety of styles of all these artists who guest on this album says something significant about Dion’s own eclecticism and underlines his already well established 66-year legacy. Perhaps even more significant about their contributions is that to a person they leave their own egos at the door when they play on his cuts. They all do it the Dion way. In a blindfold test, the listener would be hard pressed to recognize whose playing what, even Billy Gibbons of ZZ Top on the title cut.

The album opens with “Taking It Back,” a song that has Joe Bonamassa on guitar. On his own compositions, Bonamassa wears almost as many stylistic hats as Dion, but here he doesn’t grandstand. He simply backs Dion who sings, “You’ve taken all that’s mine, and I want you gone.” I asked how Susan, Dion’s wife of six decades, responded to the lyrics. He answered this way. “Well, you know, that’s a funny thing where people think every song you write is autobiographical. It’s a funny business I’m in.”

Bruce Springsteen plays guitar and harmonica on “Angel In The Alleyway.”

“Bruce Springsteen never had a job,” laughs Dion. “He got his license when he was 24. He was writing about cars. He never drove. He never had a job. He was never inside a factory. He starts his Broadway show by saying, ‘I’m a fraud,’ and everybody yells, ‘You’re out of line. You’re full of shit.’

“That’s how much the illusion is that people think you’re always singing about yourself, and you’re not. People are actors. I mean singers are actors. Songs are like scripts. When I write, I find that character, and I think, ‘What would I like?’ What words would I like to come out of this character’s mouth? ‘You’ve taken all I’ve got. Be gone, gone, gone, out of my mind!’ You know what I mean?”

“You’re inside this character who is going through this, and the characters are people I really meet. Some are sad, and some are thrilling. You know what it is. You meet guys and they go, ‘I got two kids and my wife, and I met this girl on Facebook, and she’s an old flame. She turned me down at the farm, but she’s my soul mate, and I’m gonna leave my wife.’ And I go, ‘Are you out of your fuckin’ mind?’”

The only song on the album Dion didn’t write is “Red House” by Jimi Hendrix. Keb’ Mo’ plays acoustic guitar on it.

Acoustic guitar on a Hendrix song!

“I talked to Keb’ Mo’ about this,” says Dion who still has a thick Bronx accent although he lives in Florida. “I was telling him I grew up Italian in an Italian ghetto in the Bronx, and he was telling me how crucial or how something like that forms you so strongly, just to have a world view from a growing note in such a potent environment.

“I was saying, ‘You know, I don’t sing black. I don’t sing white. I sing Bronx.’ It’s black music, but it’s filtered through this Italian neighborhood, and it comes out with an attitude, you know?’”

Dion sent Springsteen and vocalist Patti Scialfa a rough cut of “Angel in the Alley Ways.” “So, Patti sends me back 64 tracks. You know what I’m talking about, right? My whole career isn’t 64 tracks. So, my engineer says, ‘What the hell. There’s 64 tracks.’

“So, Bruce calls me and goes, ‘Listen, Dion, Patti loved the song so much that she put everything on it.’ What you’re hearing on that record is her production, everything! She told me where to play guitar, where to play harp.’

“I mean it makes you feel loved. I mean people giving you time like that. It’s just overwhelming. It’s like it makes you feel so grateful. There’s nowhere to go with it. You just go, ‘Thank you! Thank you!’ What are you going to do? I know they have a studio in their house, but still, they spend a lot of hours in the studio. That doesn’t come easy.”

I asked Dion if rock and roll gives him a free pass to express his take on these characters he sees in his mind and invite all these rockers into a world built on a foundation of doo wop teen idol hits like “Runaround Sue,” “Ruby Baby,” “Lovers Who Wonder,” and “The Wanderer” which is the title of a musical based on his life and music. (It will stage its world pre-Broadway premiere at the Paper Mill Playhouse in Millburn, NJ on March 23rd.)

“Well, rock and roll is something like that, but I would say the blues is closer to the soul because you don’t have to think so hard.” Dion released four blues albums in the last decade.

“You just express yourself on this form. It’s so beautifully natural, and truthful – and simple – and profound that you just grab a hold of it and express anything you’re feeling, your joys, your dreams, your sorrows, your challenges, whatever you’re in the middle of.

“It’s just such a natural heartfelt, gut felt form of music that’s got to be God given. It’s like a natural antidote for suicide. I mean, come on. Like I said, you would wind up thinking, but with the blues, you could get out of yourself.  B. B. King had that line. What’s that line? It feels so good to sing about something so bad.”

In his living room, Dion has a multi-media piece of art work depicting Robert Johnson hanging on his wall. “I cut out a picture of Quincy Jones, and I painted it on there, but the Robert Johnson painting, what it is I had the idea of the crossroads and the cross ’cause he says, ‘I fell on my knees. The Lord have mercy, father, if you please.’ So, it was that first verse that got me. Let me paint this, you know, the blues. There was only two pictures of him at the time.”

Dion is one of my all-time favorite interviews for several reasons. First, he’s articulate and can cross over between rock and roll, rock, and blues with no barriers. But perhaps, most fascinating are his memories of the legacies long gone like Sam Cooke and Buddy Holly, both of whom he toured with in the late 50s.

“Buddy Holly was like a statuesque guy. He was like very deliberate and very decisive, and he was like an accountant on stage; very meticulous and very structured. Then, he’d put the Strat around his neck and walk out. It was like all bets were off. You didn’t know where you were going. He was like Clark Kent on stage.”

“Sam Cooke protected ME in the south at that time. We went to see James Brown and The Flames, and I wasn’t treated good. But he protected me. He was a very responsible, statuesque dignified kind of guy, you know? The way he walked, the way he talked. Much more than me. There wasn’t that much of a bridge between us. He was down to earth, and yet he was educated. He was a pretty special kind of guy. He really was. He just had a lot going for him. Even Buddy Holly was like that, the history, the spirituality. I don’t know. They were like before their time. They had so much going for them on so many levels.”

Pete Townshend of The Who writes in the liner notes of Stomping Ground: “Dion, like a circling star that never fades, generates the energy and fire we need to pull ourselves up and start again.  Dion is a star who knows well how to start again, how to keep shining.  He looks at his watch every few years. Damn! Let’s make a record.  Take care. This one will blow those little white things in our ears right into your brain.”