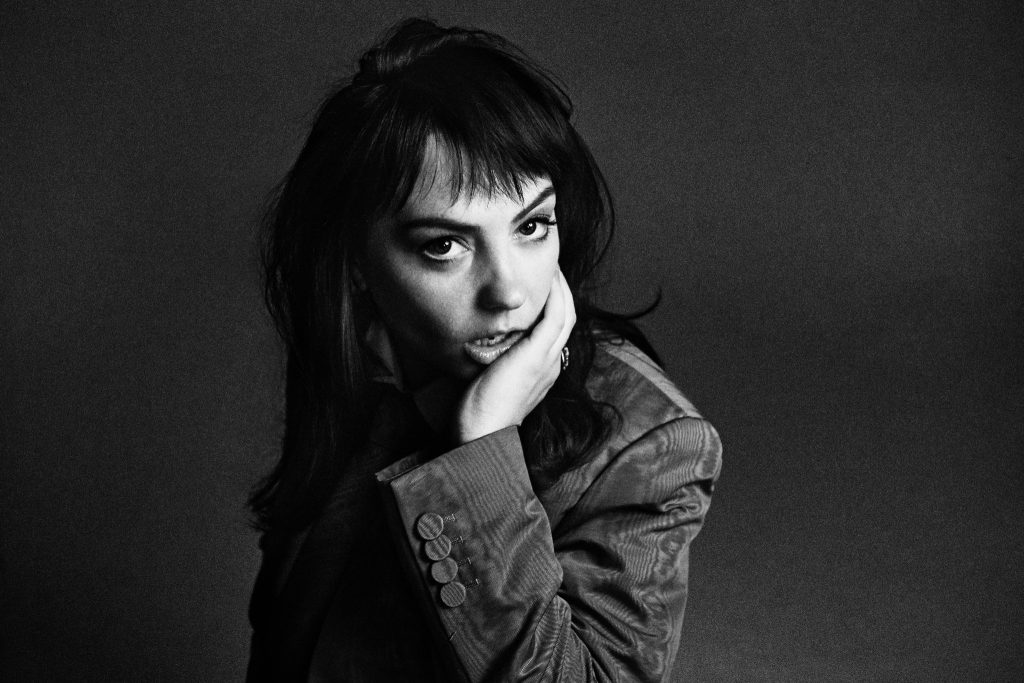 As part of their 50th anniversary celebration for Karen Dalton’s 1971 masterpiece, In My Own Time, celebrated archival reissue label Light in the Attic (LITA) released a new single today (1/13) featuring North Carolina-based Angel Olsencovering the singer’s iconic “Something on Your Mind.”

Written by Dino Vallenti, the track was originally found on Dalton’s second album, In My Own Time. The single is the latest installment from LITA’s on-going 7” vinyl and digital singles Cover Series, featuring the labels favorite artists covering their favorite artists’ songs. The single was pressed at Third Man Pressing, with artwork by Los Angeles-based fine artist Robbie Simon.

LITA’s anniversary edition of In My Own Time — a true masterpiece by one of music’s most mysterious, enigmatic, and enduringly influential artists; featuring Dalton’s interpretations of songs such as “Are You Leaving for the Country,” “When a Man Loves a Woman,” “Katie Cruel,” and her posthumously recognized signature performance of “Something on Your Mind” — is due out March 25th and available now to pre-order in multiple formats (including a Standard Editionand the bonus-filled Super Deluxe Edition). 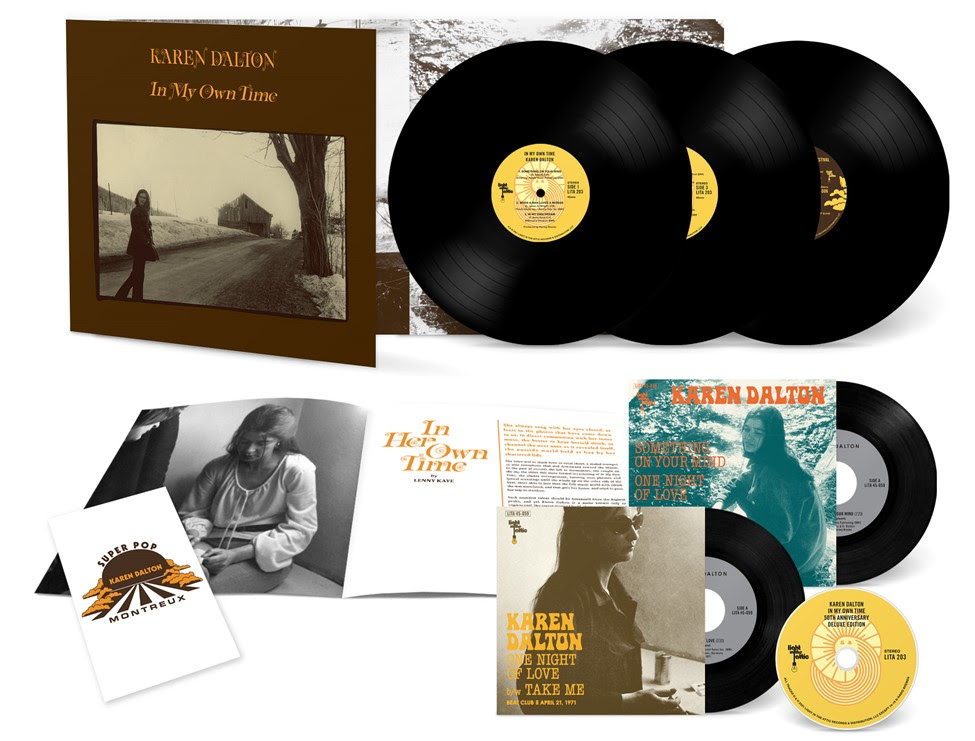 Expanding exponentially upon LITA’s critically acclaimed 2006 reissue of the album (co-produced by Nicholas Hill, In My Own Time (50th Anniversary Super Deluxe Edition) features the newly-remastered original ten-track album on three sides of 45-RPM, 180-gram vinyl pressed at Record Technology Inc. (RTI), with the fourth side showcasing alternate takes from the album sessions. The set includes nine bonus tracks overall (including six previously unreleased live performances), including Live at The Montreux Golden Rose Pop Festival (May 1, 1971), available exclusively as part of the Super Deluxe Edition. This is the first time this audio has been made available in any physical format — presented on 180-gram 12-inch vinyl, pressed at Third Man Record Pressing, and featuring a stunning etching of Dalton by acclaimed artist Jess Rotter on the B-Side. Accompanying the bonus record is a replica playbill from the festival, meticulously arranged and compiled from vintage source material by Darryl Norsen.

The Super Deluxe Edition also contains a CD with all tracks included in the package and two 7” singles, including previously unreleased live recordings captured at Germany’s Beat Club in April of 1971 ─ both pressed at Third Man Record Pressing and housed in tip-on jackets. All audio has been newly remastered by Dave Cooley, while lacquers were cut by Phil Rodriguez at Elysian Masters. A 20-page booklet, featuring rarely seen photos and liner notes from musician and writer Lenny Kaye (with contributions from Nick Cave and Devendra Banhart), rounds out the package, which comes housed in a special trifold jacket, individually foil stamped and numbered. Strictly limited to 2,000 copies worldwide, the Super Deluxe Edition is available now to pre-order exclusively at Karen-Dalton.com and LightInTheAttic.net, with a movie poster bundle offering. More info on the poster below.

Additionally, the expanded 19-track anniversary edition of In My Own Time (also offered as part of the Super Deluxe Edition) will be available separately on CD and digitally. Plus, a cassette edition is being offered that features 15-tracks, excluding the Live at The Montreux Golden Rose Pop Festival audio, which is exclusive to the Super Deluxe, CD, and digital editions. Lastly, In My Own Time (50th Anniversary Standard Edition) — featuring the newly-remastered original 10-track album — is available (online) as a limited-edition 8-track. The booklet (featuring unseen photos and liner notes) is only included with LP and CD editions. All formats will be available at independent record stores (with the exception of the online exclusive Super Deluxe Edition), as well as at Dalton’s online store and LITA’s site.

Coinciding with the anniversary and single releases is the internationally acclaimed documentary film, Karen Dalton: In My Own Time, which premiered in theaters on October 1st and released digitally on November 16th through Greenwich Entertainment. Directed by Robert Yapkowitz and Richard Peete, and executive produced by Light in the Attic, Wim Wenders, and Delmore Recording Society, the film chronicles the life, music, and legacy of Dalton and features interviews with family, friends, collaborators, and a variety of artists (including Peter Walker, Nick Cave, Lacy J. Dalton, and Vanessa Carlton). Angel Olsen lends her voice to the film as the principle narrator, reading aloud from Dalton’s personal journal.

As a special gift, all orders of LITA’s In My Own Time (50th Anniversary Super Deluxe Edition) will include an 18” x 24” fold-out of the documentary’s movie poster, illustrated by artist Matt McCormick.

The Oklahoma-raised Dalton (1937-1993) brought a range of influences to her work. As Lenny Kaye writes in the liner notes, one can hear “the jazz of Ella Fitzgerald and Billie Holiday, the immersion of Nina Simone, the Appalachian keen of Jean Ritchie, [and] the R&B and country that had to seep in as she made her way to New York.”

Armed with a long-necked banjo and a 12-stringed guitar, Dalton set herself apart from her peers with her distinctive, world-weary vocals. In the early ‘60s, she became a fixture in the Greenwich Village folk scene, interpreting traditional material, blues standards, and the songs of her contemporaries, including Tim Hardin, Fred Neil, and Richard Tucker, whom she later married. Bob Dylan, meanwhile, was instantly taken with her artistry. “My favorite singer in the place was Karen Dalton,” he recalled in Chronicles: Volume One (Simon & Schuster, 2004). “Karen had a voice like Billie Holiday and played the guitar like Jimmy Reed.”

Those who knew Dalton understood that she was not interested in bowing to the whims of the record industry. On stage, she rarely interacted with audience members. In the studio, she was equally as uncomfortable with the recording process. Her 1969 debut, It’s So Hard to Tell Who’s Going To Love You The Best (reissued by Light in the Attic in 2009) was captured on the sly when Dalton assumed that she was rehearsing songs. When Woodstock co-promoter Michael Lang approached Dalton about recording a follow-up for his new imprint, Just Sunshine, she was dubious, to say the least. The album would have to be made on her own terms, in her own time. That turned out to be a six-month period at Bearsville Studios in Woodstock, NY.

Producing the album was bassist Harvey Brooks, who played alongside Dalton on It’s So Hard to Tell Who’s Going To Love You The Best. Brooks, who prided himself on being “simple, solid and supportive,” understood Dalton’s process but was also willing to offer gentle encouragement and challenge the artist to push her creative bounds. “I tried to present her with a flexible situation,” he told Kaye. “I left the decisions to her, to determine the tempo, feel. She was very quiet, and I brought all of it to her; if she needed more, I’d present options. Everyone was sensitive to her. She was the leader.”

Dalton, who rarely performed her own compositions, selected a range of material to interpret—from traditional songs such as “Katie Cruel” and “Same Old Man” to Paul Butterfield’s “In My Own Dream” and Richard Tucker’s “Are You Leaving For The Country.” She also expanded upon her typical repertoire, peppering in such R&B hits as “When a Man Loves a Woman” and “How Sweet It Is.” In a departure from her previous LP, Dalton’s new recording offered fuller, more pop-forward arrangements, featuring a slew of talented studio musicians.

While ‘70s audiences may not have been ready for Dalton’s music, a new generation was about to discover her work. In the decades following her death, a slew of artists would name Dalton as an influence, including Lucinda Williams, Joanna Newsom, Nick Cave, Angel Olsen, Devendra Banhart, Sharon Van Etten, Courtney Barnett, and Adele. In the new documentary film Karen Dalton: In My Own Time, Cave muses on Dalton’s unique appeal: “There’s a sort of demand made upon the listener,” he explains. “Whether you like it or not, you have to enter her world. And it’s a despairing world.” Peter Walker, who also appears in the film, elaborates on this idea: “If she can feel a certain way in her music and play it in such a way that you feel that way, then that’s really the most magical thing [one] can do.” He adds, “She had a deep and profound and loving soul…you can hear it in her music.”

Tracklist – In My Own Time (50th Anniversary Super Deluxe Edition):

Tracklist – In My Own Time (50th Anniversary Standard Edition):

Pre-order In My Own Time

Angel Olsen Anniversary Blues Cover Documentary folk In My Own Time Karen Dalton Light in the Attic Single Something On Your Mind
Share. Facebook Twitter Pinterest LinkedIn Tumblr Email WhatsApp
Previous ArticleRonnie Spector Dead at 78: She Broke Down the Glass Ceiling in Rock and Roll
Next Article World Premiere Video From Twangtown Paramours, ‘That’s What the Blues Are For’