The Delta Roots Festival: A Prelude to the Return of King Biscuit

“You know, there’s a new dawn rising, and it shines like gold. In other words, the whole album shines like gold.” Interview with Jim Weider, sole guitarist for The Band from 1985-2000, whose Weight Band will play The Delta Roots Festival on April 9! 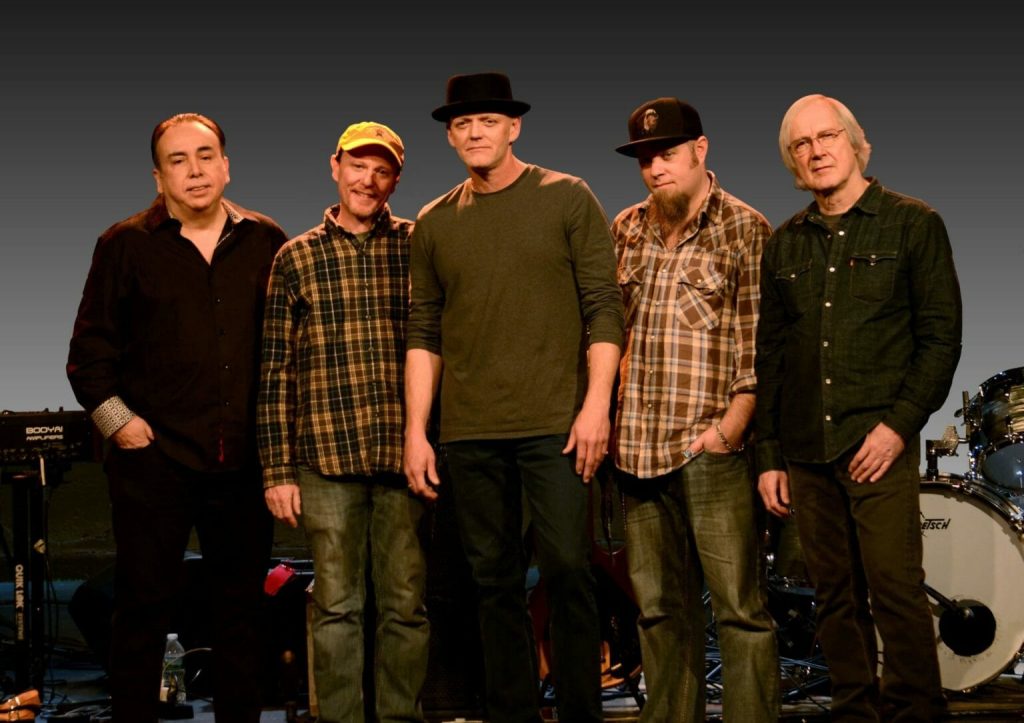 “We needed a 10th tune for our album Shines Like Gold,” says Jim Weider, leader of The Weight Band starring in the Delta Roots Festival in Helena, Arkansas, Saturday, April 9th. “I remembered that Willie Dixon had sent Levon (Helm) this tune, “It Don’t Make Sense If You Can’t Make Peace,” and I always loved it. We didn’t cut it in 1993 for the Jericho album, but I remembered that cassette, and I said, ‘Man, I know the perfect tune to end this record,’ and we cut that live. We did two takes, and we kept the second take.

Helena Arkansas’s favorite son and founder of The Band Levon Helm is gone now as are Sonny Boy Williamson, Sunshine Sonny Payne and Bubba Sullivan, all critical movers and shakers behind the iconic King Biscuit Blues Festival in Helena, Arkansas, beacons of hope for the future. The Delta Roots Festival is a declaration that the Biscuit will survive, a prelude to the October festival to come after two years silenced by Covid.

Each of these iconic shapers of The Biscuit, the south’s premier blues festival, has left us with a gift that’s the envy of the musical world. That gift is more than a memory, it’s a map to a brighter future, a future promised in The Delta Roots Festival. The flyer advertising that festival sports the headline “The Biscuit had a baby, and they call it Delta Roots.”

Jim Weider was the sole guitarist for The Band from 1985 until that group’s dissolution in 2000. He wrote songs and performed on three of The Band’s studio albums, Jericho, High on the Hog, and Jubilation. He toured internationally with original Band members Levon Helm, Garth Hudson and Rick Danko for 15 years and was featured with them on numerous albums, films, videos and in television appearances.

Weider is a phenomenal guitarist and singer/songwriter spearheading The Band legacy with Shines Like Gold, a new CD that carries that legacy into a world in need of its positive and grounded message of hope.  I told him he was more normal, more grounded, and more focused than almost anybody in his position that I interview. Then, I asked him how he does it.

“You know what,” he said. “I’ll tell you how you do it. You do what Rick Danko said, ‘Always stay desperate!’”

We both laughed, and I told him that he must be in great shape then. “That’s one of my favorite Danko lines,” he answered. “I always stay desperate. As soon as we (The Band) would get off the road, he’d go off and play a gig in a freakin’ bar in the middle of nowhere, and I’d be with him.”

We’re all in this together. And the future lies in the differences we represent and our ability to pull together. In a world struggling to discover the new normal, the little festival that could on the banks of the mighty Mississippi is soldiering on. I remember Honeyboy Edwards telling me his first memory at five years old was the sound of the levee breaking in the Mississippi flood of ’28. He was too young to have seen the African Americans who were used as human sandbags ordered to lie down and hold back the waters.

Times have changed. The Delta Roots Festival and the King Biscuit Blues Festival in early October are a birth and rebirth in succession. It’s dusting ourselves off. It’s a family reunion. It’s our musical family.  We will strive to survive and thrive in this promise to be fulfilled. Shines Like Gold opens with “Weight of The World.”

Some trust the liars some fear the truth

father of light high in the sky

lead the path in the circle of time

And make the weight of the world disappear

Release your burdens let go of your fears

Build tomorrow with blood and tears

And make the weight of the world disappear.

The song was written before Russia attacked Ukraine.  “We were talking about everything we’ve been going through with the pandemic,” says Weider. “So, I started writing, and I wrote about five verses and sent it down to a good buddy of mine, Colin Linden who produced the record, and said, ‘What do you think of this idea? Here’s some verses and a chorus,’ and I had these chords, and that kinda developed. We rehearsed it, and at that rehearsal it just wasn’t really – there was something not quite right about – couldn’t get that chorus to really ring, you know. So, Colin and I went back and rewrote it again. He added a couple of great verses, and he really helped arrange that with me which made that tune great. For me it’s really you make the weight of the world disappear. You leave your burden.

“It’s a common theme through the whole record without saying it, without saying, ‘Oh, my God. I can’t take it no longer.’ The record has a theme on every song. I would write these tunes about what we’re going through, and then I would get an idea and come back.

“‘Tall Trees’ (also on the new album) is a song that came to me. I was thinking about Levon. The verse about Levon is about my life, growing up and contemplating leaving town, and the mountains, and the second verse is about leaving town, and it’s about people you looked up to when they fall, but they’re never forgotten. Guys who really change your life with their work and their personality. I was thinking about just reflecting on my life and people that have changed my life, people that have changed me.”

That muddy river rolled by his back door

Looking for a song he left his home

There was no warning for you to heed

When you know the thing you need

When they’ve fallen to the ground

What they’ve done won’t be forgotten

The title song “Shines Like Gold” and first single is the most upbeat song on the album.

I see the sun on the horizon

I think the hard times are leaving

I can’t help but believing

The Delta Roots Music Festival is a whole day of great sounds from where it all began in Helena, Arkansas. Joining The Weight Band for this special post-pandemic showcase are Arkansas’ own Cate Brothers, Fonky Donkey, Rodge Arnold, Duane Stevens Band, Mother Hubbard & The Regulators, Arkansas Brothers, Colin Linden, Bailey Hefley, and the Live Wire Band.

“It’s like a family of musicians,” says Weider. “We used to go down there a lot to Levon’s hometown area, and The Cate Brothers are gonna be there. They played with Levon so much. They played with The Band on double shows, and so I’m really looking forward to it.

“It’s a celebration of Levon’s life. So, we’re gonna do some classic tunes from Levon’s catalog that we like, and it’s gonna be great. I think it’s gonna be great. It’ll be a cool thing to do for us.” Tickets for the Delta Roots Music Festival are $25.00 and can be purchased online at deltarootsmusicfest.eventbrite.com or at the King Biscuit Blues Festival office (319 Phillips Street, Helena). Hours for the festival are 10 a.m. until 9. p.m.