"We captured live tracks and then would use that as a foundation to build the song." Max Davies talks new Cory Wong-produced album 'Wise River,' out April 29! 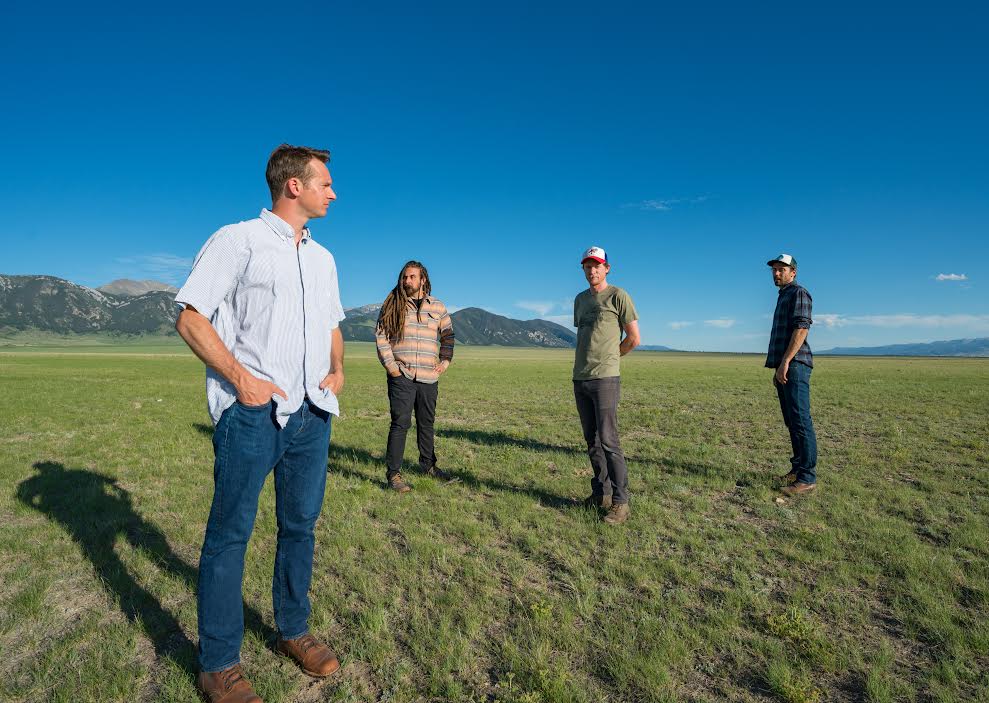 Max Davies is a member of Kitchen Dwellers providing guitar and vocals. Kitchen Dwellers are a progressive bluegrass band based out of Bozeman, Montana. They are known for their high energy live shows and are credited by their fan base for creating a genre of music known as “Galaxy Grass.”

Growing up in Crystal Lake, Illinois Max started playing guitar as a teenager and never put it down. In August 2014 he moved to Montana and joined Kitchen Dwellers and has been touring with the band ever since. He currently plays a Martin D-28 as his main acoustic guitar. The band’s new record, Wise River, is available April 29th.

Who are your favorite musical artists who inspire you?

Growing up I was exposed to all sorts of music in the house. Music runs in my family to an extent and if I had to guess that’s where my interest in the art form came from. There are so many people that have inspired me over the years and for various reasons whether it was for their songwriting, or their playing and singing.

On the acoustic guitar, my main influence has been Tony Rice for his melodic, articulate playing. The phrases he played were so intricate and beautiful. In addition to Tony, Bryan Sutton, Laurence Juber, Brent Mason, and Stanley Jordan are all huge influences. Before I got into the acoustic guitar I was very much into the Rock and Roll full band experience.

One of my earliest influences was Steve Howe from Yes. He was so inventive and creative with his playing and so well trained. The stuff he plays blows me away, especially live. When it comes to songwriting, I’m a sucker for the ‘69-’75 British and American Rock and Roll. The hits that came out during that time frame are astonishing. I have to mention Trey Anastasio for his contributions to guitar playing in general and where he took improvisational music. He wrote such unconventional music that just grabs you by the ears and stops you in your tracks. I could probably go on forever!

How did you start playing with Kitchen Dwellers?

I first met the guys in the band in a backyard jam in our hometown of Bozeman, Montana and we were just hanging out playing songs. I started a band in Bozeman and we ended up opening for Kitchen Dwellers a lot in town and even did a tour with them. When their guitar player quit, they asked if I wanted to hop on for a couple of gigs. That just kind of morphed into me being a full-time band member.

Is there a Montana sound that influenced you and the band?

The thing about Montana that influences us the most is really the attitude that people have in Montana. Montanans are a strong bunch that live through long and cold winters and typically make their living off the land. There is also a freedom and recognition that people are allowed to live life however they may choose even if you don’t agree with it. That is really reflected in how our band operates and makes artistic and business choices.

Can you talk about the new record, Wise River?

Yes!  We can’t wait for this record to come out. The release date is April 29th. We tapped Cory Wong to produce the album, and man it was a blast to work with him. The album has ten tracks that range from purely acoustic to some that are more heavily produced. Nearly every song was written during Covid lockdown, so the subject material is influenced by isolation and things that became very important during a pandemic. We also had the time to really try and hone in the songs before going into the studio. We recorded the whole thing in four days.

Where did you record it, and how did producer Cory Wong help?

We recorded at Creation Studios in Minneapolis. The studio has a ton of history of recording and we got to meet some of the other producers that work out of Creation and hear their stories. We recorded every song in the main tracking room and didn’t use isolation booths.

We captured live tracks and then would use that as a foundation to build the song. All vocals were done separately and we had a lot of fun layering vocals on. We have always incorporated harmonies into our songs but this was the first time we’ve ever doubled the main vocal track.

Something that Cory brought to the table was his expertise in making things sound full and big. Pre-production work had us working a lot on “fence posts” which make things more interesting for the listener, a clear shift in direction inside of the song. We learned a lot about the songwriting process. Cory Wong introduced us to Elliot Blaufuss who really taught us a lot about the lyric process and how to speak directly to an audience with what you are trying to say with a song. Cory brought so much enthusiasm and energy to the process and was really able to leave a stamp on the project. I don’t know if he’s spent more time playing rhythm guitar or working in Pro Tools, but I would guess it’s close.  The guy is a machine.

Can you talk about your bandmates and what they bring musically and creativity?

We all come from such different backgrounds. Swain can write really poetic lyrics and is kind of the driving rhythm of the band on mandolin. Joe is really expressive with his bass playing and makes some of the strangest noises I’ve ever heard come out of the bass. Torrin is basically a self-taught banjo player with a background in drumming so he plays the banjo unlike anyone else I’ve seen. He also has a really strong growly voice which is uncommon in Bluegrass so we’ve really got an array of skills and techniques being used!

We all seem to be open to the creative process and work with a forward motion so as to try and not shoot ideas down. We give a lot of creative freedom to each other. Sometimes it’s a challenge because we aren’t all from the same background so you really have to try and see what the other person is going for but usually, and it doesn’t always happen, it ends up being for the best.

What do you feel your role in the band is?

In a formal sense, my role is rhythm/lead guitar and vocals. There’s a lot more that goes into being in an independent band and everyone takes on extra duties. For a long time, I was the “merch” guy but we have recently recruited the help of our longtime friend to help out there. Being in a band also requires a positive attitude so I try to spread that wherever I can although I’m sure that’s something I can work on.

You are a producer as well. Who have you worked with and do you like producing?

Last year I had the great fortune of producing and playing on Matt Wallin’s album Ravens. It was a first for me and such a fun experience. It’s so fun to work on someone else’s music and see their project and vision come to life. We had many late nights fleshing his songs out and talking about the album. His songs were so personal and little glimpses into his life and philosophy. He’s been able to take that album and use that as momentum to get better gigs in town so it was also very rewarding in that sense.

I feel the most inspired when I’m sitting in a room with somebody one on one trying out different musical ideas. It was one of those opportunities that really only was possible because we were locked down so I will always remember that time vividly. I’m really looking forward to doing more things like that in the future.

Well, I know the four guys on stage are having a blast. From my perspective, it’s a place where everyone is welcome and you can either come and stand arms-folded all night or can dance like there’s no tomorrow. You will hear a ton of original music with some familiar songs peppered in. We rarely play anything the same way twice.

Our hope is that at some point in the show you are transported to another place. Some of our songs have long instrumental sections that we really try to stretch out and others are just short rockers. Our song selection ranges from traditional Bluegrass, Funk, Metal, Blues, and everything in between. We like to think that there’s something for everybody. From my concert going experience it seems like a pretty communal place where people meet and have even made life-long friends.

The band has a pretty full schedule the rest of the year.  We will be on tour all spring in support of Wise River hitting a couple dozen cities all over the country.  This summer we are playing the legendary Telluride Bluegrass Festival and performing at Summercamp, Floydfest, Peach, Northwest String Summit, and the inaugural Sacred Rose in Chicago.