The Eagles’ Hotel California Tour Is Winding Down 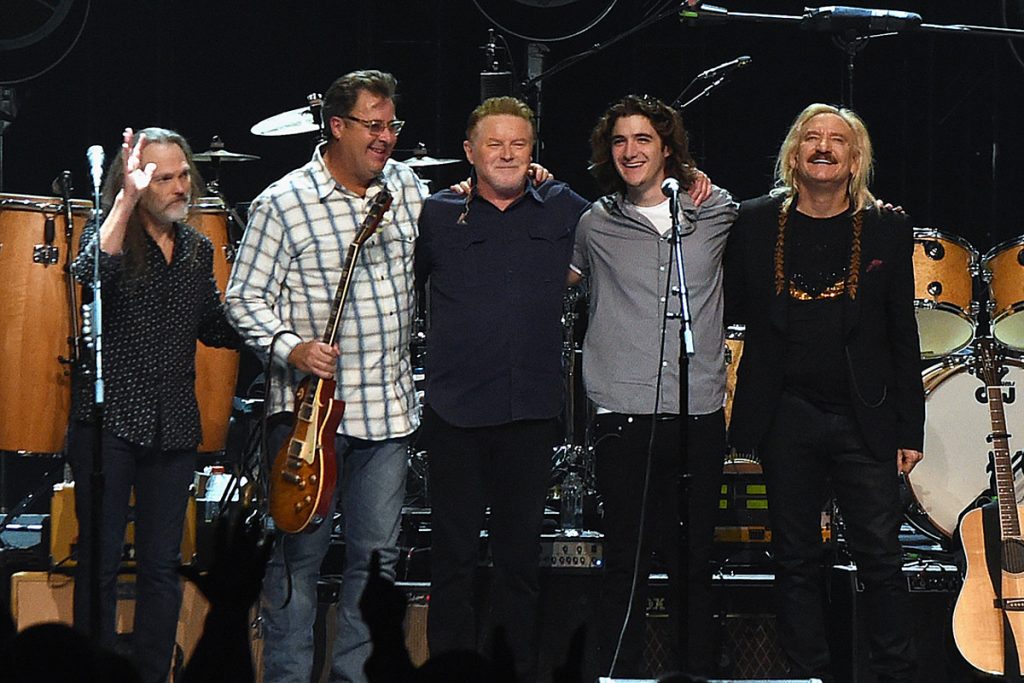 The Eagles made a stop in Buffalo, NY, on April 21 as part of their Hotel California Tour. A nearly sold-out audience braved the chilly evening to listen to the band’s live performance of one of the biggest selling albums in the history of rock ‘n’ roll. They also stayed to hear some of the band’s greatest hits ranging from “Take It Easy” to “Heartache Tonight,” and a lot in between.

“No fireworks, no choreography, no wind machines,” founding father Don Henley said at one point. “Just a bunch of guys playing guitars.” He would later note the Hotel California album only had 40 minutes worth of music. “Maybe we should go back to that,” he mused. A majority of the audience voiced their approval.

And a majority of the audience could relate to Joe Walsh when he lamented, “I’d rather be in my twenties in the ’70s than in my seventies in the ’20s.” Perhaps they came to hear the music of their youth and revel in the memories it brought to mind. Perhaps that was also true of their concerts in Savannah, GA, Chicago, IL, Raleigh, NC, Columbus, OH, and many other cities the band has visited since the tour began in the pre-COVID days.

However, not all in the audience were chronologically enhanced. Some were in their teens, some in their twenties, and some were middle-aged. One thirty-something man proclaimed how he had always wanted to see the Eagles since he was a little kid. His joy at having his dream come true was visible in his facial expression. Another gentleman who sat near the front became a crowd favorite when his visage appeared several times on the giant video screen behind the stage. Toothless, wrinkled face, and holding a cane, the elderly gentleman obviously was having a grand time.

“Hotel California,” both the album’s title track and the album itself, takes a penetrating look at the excesses and seduction that became synonymous with the state of California, and ultimately with America itself. Name a song and chances are there is a catchphrase to emphasize the point:

Chances are, though, that most were either there to remember or there to forget. It has been nearly 46 years since Hotel California was released. The music no doubt took people back to a different time and place, recalling pleasant memories or perhaps putting unpleasant ones to rest. However, it would be a mistake to think nostalgia was all the songs were good for.

“The Last Resort,” the final song on the album, is grounded in the environmental movement that was gaining momentum in the ‘70s. “There are no more new frontiers” and “I don’t know why you call someplace Paradise and kiss it good bye” are two of the more powerful lines from the song. During intermission, several people were talking about how relevant it is today. In the words of one twenty-something woman who stood talking to her father, “It is sad how little progress we have made since that song was written.”

The greatest hits portion of the show started with the band singing “Seven Bridges Road” as the stage lights slowly rose. The song has been used as the their opening number in concerts for many, many years now. “Take It Easy” followed and from there a potpourri of well-known tunes followed. Mixed in with the Eagles songs were a few other songs the group have seemingly adopted: “Rocky Mountain Way” by Joe Walsh, “Funk #49” from Walsh’s days in the James Gang, and Henley’s solo hit, “Boys Of Summer.“

At one point, Don Henley came to the front of the stage to tell the audience the band would be celebrating its 50th anniversary in a few weeks. He thanked the audience in Buffalo and around the world for their support over the last 5 decades.

The band’s eponymous first album was released on June 1, 1972. Of the original band only Henley remains. Glenn Frey, who Henley always maintained was the leader of the band, passed away on January 18, 2016 from complications of rheumatoid arthritis, acute ulcerative colitis, and pneumonia. Bernie Leadon left the band in 1975 prior to recording Hotel California. Randy Meisner would follow suit in 1977. Don Felder (1974), Joe Walsh (1975), and Timothy B. Schmit (1977) would later join the band.

Their debut single may have been titled “Take It Easy,” but the past 50 years has been anything but easy. The departures of Leadon, Meisner, and eventually Felder in 2001 were acrimonious to say the least. It is well known the band took a 14-year vacation before regrouping in 1994. And while they continued to tour and make nice on stage, there were unconfirmed rumors that Henley and Frey were once again estranged at the time of the latter’s death. However, months before Frey’s death Henley said that whatever disagreements the two had in the past were now water under the bridge.

Despite the band’s trials and tribulations they still continue to tour. So in that sense, too, they do not take it easy. The current lineup has Vince Gill joining Henley, Schmit, and Walsh on stage. Steuart Smith, guitarist and multi-instrumentalist, has toured with them since 2001 and some proclaim him to be the fifth Eagle. In fact, when Smith agreed to replace Don Felder he did so on the condition he remain sideman to the group, not be part of the band. He still prefers it that way.  He loves the work but not the attention that comes with it.

There are those who pooh-pooh the Eagles as being too pop and not being a truly rock and roll band. The over 18,000 in attendance at KeyBank Center in Buffalo on April 21 didn’t care about whether the band was truly rock or not. It was the music they cared about and they stayed for the long run. And the Eagles continue to take it to the limit.