Steve Berlin-produced 'The Hang' will be released on August 12! 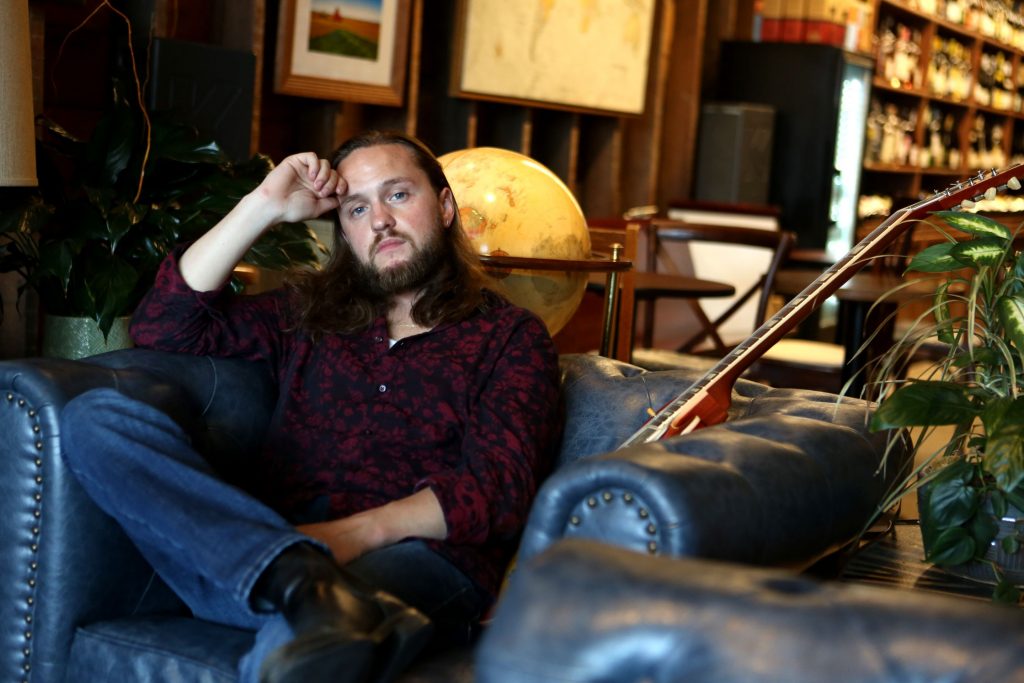 Half guitar guru and half singing, songwriting great Taylor Scott is gearing up for his next album release, The Hang, produced by longtime Los Lobos member Steve Berlin. Having grown up with the American West as the backdrop of his childhood, Scott traverses the expansive terrain of country music and old school blues. Scott was recruited by blues legend Otis Taylor shortly after his high school graduation to join his band, and spent four years touring internationally. Like Taylor, Scott throws out the blues rulebook and implements twangy textures.

“It changed my trajectory,” he remembers of his time on the road. “Touring with Otis Taylor was a special blessing in my life that I’m probably more grateful for now than ever. Starting out as a 19 year old kid fresh out of a Wyoming high school, he took me to Europe 5 times a year to tour and many other places around the states and Canada. The huge amount of travel and musical experience that I got over such a short few years completely changed my life. I also learned about breaking genre boundaries and rules from Otis who once said to me, ‘I have no interest in conservative music.’ That stuck with me as did his heavy right hand groove on the guitar and his musically unapologetic attitude.”

The Hang gets its name from Scott’s sense of community that provides the foundation of his music-making, and its concept is essentially about finding the light in the darkness of chaotic times. “With my band, it’s never just about business,” Scott explains. “It’s about the hang. It’s about spending time with people you love, and creating an ever-widening community. That’s one of my favorite things, not only in music, but in life, too. So much of my music is about being present, and The Hang embodies that spirit.”

His favorite singers, he tells me, “Ray Charles, Ralph Stanley, David Hidalgo, Mavis Staples, George Jones, Gregg Allman, Ted Hawkins, Bobby Charles, and Bobby Blue Bland. I’m not saying I sound like any of these folks, but they are some of the vocalists I’ve listened to the most over the years and each is a deeply held inspiration to me.”

Some of his favorite guitarists are Albert, Freddie and BB King, Snooks Eaglin, Duane Allman & Dickey Betts, Robert Cray, Mississippi John Hurt, Jimmy Herring, Derek Trucks, and Hubert Sumlin. But his influences vary because he finds inspiration from non-guitar players, which he interestingly translates to his instrument. He says he wouldn’t be the guitar player that he is if not for that kind of influence. “I take so much inspiration from horn players, keys players, singers etc. and apply it to my guitar playing that I can’t not mention a few: Clark Terry, Miles Davis, Professor Longhair, James Booker, Aretha Franklin, Jimmy Smith, Billy Preston (especially on the organ), George Porter Jr.,  Little Walter, Dr. John, Sun Ra, Nina Simone, and Howlin’ Wolf. Honestly, guitar-heavy music isn’t what I listen to the most these days. I just want to sing through my instrument and I’ll take influence anywhere I can find it.”

Scott has worked with producer Steve Berlin for five years now, and greatly values his ability to hear a wide variety of songs and find a tonal and sonic direction that ties them all together. “I tend to write from a country standpoint one day and a funk/soul standpoint the next, and so on. This has been a constant in our live show and the last two albums we’ve done with Steve.

“I’m influenced by so much different music and basically refuse to dumb that down in order to make it more marketable, and I know that can stress folks out (laughs). Creatively, that’s where Steve comes in to package all these flavors into a sound, style, and vibe that’s cohesive but never boring. He’s got an incredible ear for uniqueness and really knows how to bring an artist’s specific and natural abilities forward in the music.”

The core band for most of the record is Jon Wirtz on keys, Patrick McDevitt on bass, and Brian Claxton on drums. “Jon has been working with me since I was 20 years old so we have a deep musical connection.  He’s so fantastic at coming up with hooks, colors and textures. All of that really helps for our songs in their early, raw state to find some identity in the full band context. He’s also such a supportive player on the team but then will rip one down when you least expect it; I love watching him light folks up.  Patrick on bass has such fantastic time and tone and is such a thoughtful player. He grooves hard but also plays very melodically within his lines. He has a beautiful ability to bring a bit of a vocal quality to every bassline and sometimes it makes the whole track what it is.

“Brian Claxton is one of my favorite musicians to work with.  His musical skill and depth is unmatched by most I know but I swear my favorite thing about him is the energy he brings into the studio. If something is getting weird or things are clamming up at any point, Brian has this incredible ability to bring everyone in the room back into a present, energetic space with a drum fill and a smile. I know how it sounds, but I’m telling you it’s a real thing and I’ve witnessed it many times. This is a man of intuition and of intention. These are two of my favorite qualities in a person and Brian never lets me down. If you’re reading this, love you guys!”

Today sees the exclusive premiere of “Talk To Me,” the band’s new single in which Scott’s pitch, emotion, and complete control of vocals remind me of Steve Winwood. “It’s funny that you mention the Steve Winwood thing; I actually get that pretty often! I’ve probably had at least 20 people say that to me over the past five years, and it’s interesting to me because I really don’t listen to enough Winwood to consider him a major influence but still, people hear it. Very cool!”

Of the tune, he tells me, “I actually wrote the music for ‘Talk To Me’ on the Fender Rhodes at my friend Shelley’s place in Columbia, South Carolina. I can’t play the piano hardly at all, but that Rhodes sounds so good, you just tend to find your way to something. That hook came out and I became obsessed with it until I finished the lyrics. It’s a pretty emotional tune for me, so when we play it live I just focus on the groove and try my best to play a worthy solo.

“In the studio we wanted to get a little bit of a Curtis Mayfield type sound going so we started there and it became its own thing. If you listen close during that last chorus the organ almost sounds like a choir. I still don’t know how we did that.”

The Hang comes out on August 12th, and the band will celebrate that day with a show at Cervantes Otherside in their hometown of Denver. “The rest of the summer we have been/will continue to play festivals and club dates both in and out of Colorado. Traveling to play music and cultivate community are the things I’m meant to do in this life and I’m thrilled to be out here doing it! Cheers!”

“Talk To Me” – Choose Preferred Platform