It's as if their voices are two tendrils of smoke that softly weave around each other before harmoniously blending at the emotional apex of the song. 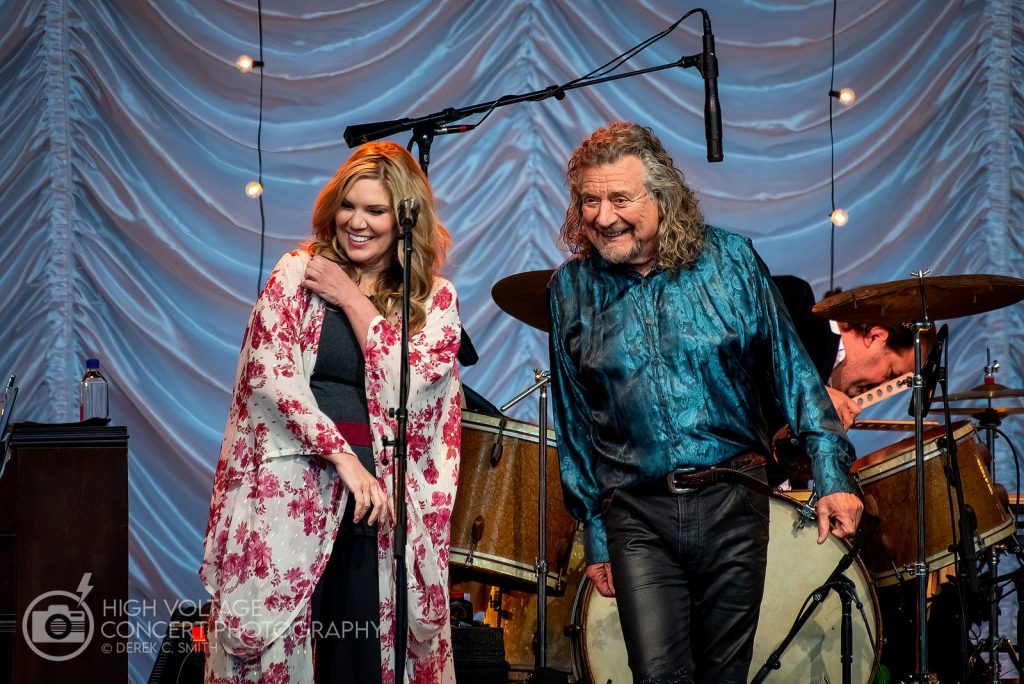 With the magnificent Chicago skyline as a backdrop, two musical powerhouses recently descended on the Jay Pritzker Pavilion in Millennium Park for an enchanted evening of music under a perfectly clear night sky.  The first has released albums in five different decades, garnered the fourth most Grammy Awards of anyone in history, and is a member of the Hall of Fame. The other is Robert Plant.

Plant is obviously the self-proclaimed “Golden God” of rock and an undeniable legend in the industry, but given the numerous Led Zeppelin t-shirts at the show and the fact that the crowd only jumped to its feet during the three Zeppelin covers, it seems as if many in the audience failed to appreciate that they were also in the presence of another legend. Alison Krauss is that legend, sitting behind only Beyoncé and Quincy Jones for most non-classical Grammy Awards in history.  She was also recently inducted into the International Bluegrass Music Hall of Fame.

But what really sets her apart is her world class fiddle playing and angelic voice, the latter of which softly lures you into her music as if she were a mythological siren (sans the dangerous intent).

It was impossible to avoid this enchantment in Chicago, particularly because Plant is so much more than the former lead singer of one of the greatest rock bands in history.  With Krauss, he sings with a tenderness that perfectly complements her vocal style, as if their voices are two tendrils of smoke that softly weave around each other before harmoniously blending at the emotional apex of the song. Simply put, their voices were made for each other, which is perhaps why fans had been clamoring for over a decade for the pair to release a follow-up album to their 2007 collaboration, Raising Sand, an album which earned them five Grammy Awards, including Album of the Year.

Plant and Krauss finally answered the call last year with Raise the Roof, an album every bit as great as the first, charting as high as No. 1 on the Billboard Independent Albums chart, No. 3 on the Billboard Top Country Albums Chart and No. 7 on the Billboard 200. It formed the foundation for their 20-song set in Chicago, with 10 songs from that album alone and another 5 from Raising Sand.

As expected, they also covered a few Led Zeppelin songs, namely, “Rock and Roll,” “The Battle of Evermore,” and “When the Levee Breaks” – with the latter two perhaps the most obvious choices as both fit perfectly within the folk/Americana stylings of the songs on Raising Sand and Raise the Roof (not to mention that “The Battle of Evermore” was the only Led Zeppelin song on which Plant ever shared vocals with a female singer, i.e., Sandy Denny).

Plant and Krauss ultimately played two encores (full set list below) before bidding goodnight to the Chicago crowd that had last seen them perform together 14 years ago.  We can only hope that it is not another 14-years before they collaborate again.

For more information on their tour, which continues through September, as well as their latest album, click here.

The Price of Love

Let Your Loss Be Your Lesson

You Led Me to The Wrong

Trouble With My Lover

It Don’t Bother Me

The Battle of Evermore

When the Levee Breaks

Stick With Me Baby

Somebody Was Watching Over Me