An Evening With Jackson Browne And His Band

Browne remarked during the concert that his eponymous first album was released 50 years ago in 1972. 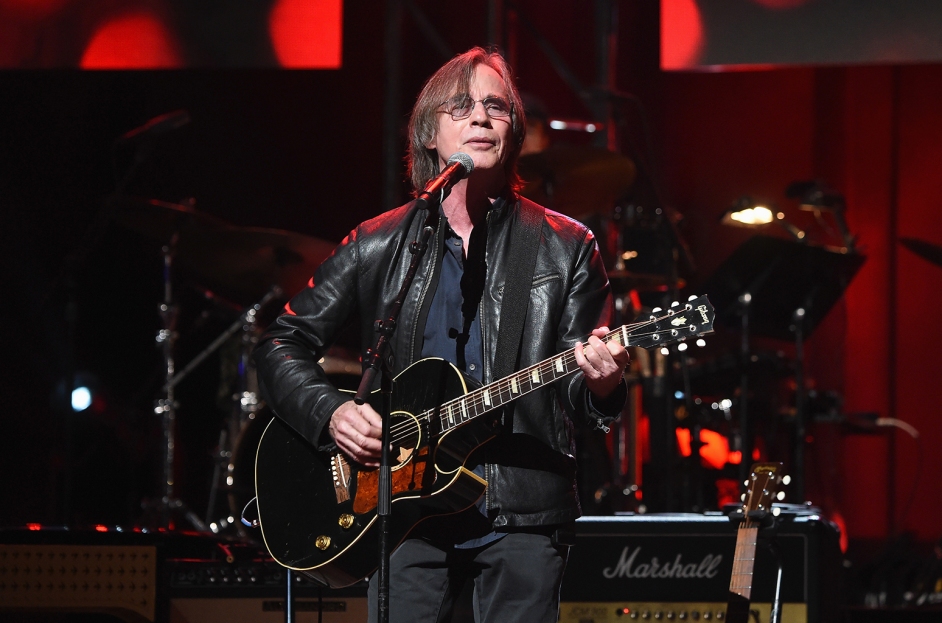 Some describe the 1970s as the decade of giving rise to the singer-songwriter. Turn on the radio back then and chances are a song by Dan Fogelberg, Cat Stevens, Joni Mitchell, Dan Hill, Laura Nyro, Jim Croce, or Gordon Lightfoot would be playing. One of the earliest singer-songwriters to make audiences sit up and take notice was Jackson Browne, who took his Evening With Jackson Browne and His Band Tour to the Rochester, NY area on Saturday, July 16.

In his younger days, Browne with his mop-top dark hair bore a resemblance to the actor Tony Danza. These days the 73-year-old performer wears his gray hair combed back and with his equally gray beard he now bears a resemblance to the actor Tony Amendola. Regardless of age or appearance, youthful passion and appreciation was in abundant supply at the Constellation Brands-Marvin Sands Performing Arts Center.

CMAC, as the venue is colloquially known, was packed with a middle-aged and older audience that cheered at the opening riff of just about every song Browne and his band offered up.

The evening started off with “Somebody’s Baby” from Fast Times At Ridgemont High – a song that took many in the audience back to their own times in high school. When the song was over and the applause died down, Brown stepped to the mike and told a story about a conversation he had where he was complaining about the state of things today. He paused to note the irony in this “because I get to do what I love best every day!” He then thanked the audience for being there – the first of many times he would do so. “If you weren’t here, I couldn’t be here,” he declared. It was a simple, straightforward declaration, just like the lyrics to his many songs.

The setlist for the evening included such crowd pleasers as “Doctor My Eyes” (from the aforementioned first album), “You Love The Thunder,” “The Dreamer,” and “In The Shape Of A Heart.” Browne ended the first half of the concert with a cover of Steve Van Zandt’s “The Patriot” and the crowd took the cheers up a notch at the lyrics:

Not all songs were oldies, but all goodies. “Downhill From Everywhere” is from his latest album of the same name. It was inspired by a quote from Charles Moore, the man who discovered the Great Pacific Garbage Patch, a collection of marine debris in the North Pacific Ocean. Made up of microplastics, the size of the patch is vast but indeterminable. When asked how so much plastic found its way there, Moore observed the oceans are “downhill from everywhere.” Once again, the audience cheered wildly as Browne sang:

Browne remarked during the concert that his eponymous first album was released 50 years ago in 1972. By that time, he had already teamed up with Jeff Hanna and Bruce Kunkel to form the first incarnation of the Nitty Gritty Dirt Band. His tenure with them was brief – only six months or so – but his relationship with the band endures. He appeared with them at their Circling Back Concert celebrating their 50th Anniversary. By 1972 his reputation had grown and he also was much in demand as a songwriter.

“These Days,” a song he wrote when he was only 16, also predates his first album and it was during his performance of the tune that a crowd-pleasing moment occurred. The song is about the loss and regret an older man feels as these days he seems to think a lot about the things he forgot to do, and of all the time he had a chance to. Browne was well into the song with his piercingly sad vocals when… He forgot the words. He and the band kept on playing as he shook his head and said, “Let’s start that verse over.”

The crowd laughed as if to say, “Yeah, we have days like that, too!” Then they cheered as he continued the song flawlessly. It was a moment demonstrating the warm bond that exists between the performer and his fans. In return, Browne stopped several times, to thank the audience for being there, for allowing him and his band to do what they love best. It was a truly symbiotic relationship.

The concert “ended” with the haunting “The Pretender” followed by “Running On Empty.” Of course, the evening wasn’t ending and neither Jackson Browne nor his band was running on fumes. The first encore featured “Take It Easy,” a song he wrote with the help of Glenn Frey and included on his second album, For Everyman.

Even before the final encore his fans knew he would do “The Load Out” and “Stay.” Those final songs were performed with as much energy and passion as the opening number. But how bittersweet it was to hear Browne plead, “Oh, won’t you stay a little bit longer?” He knew and we all knew that however much we wanted to stay and hear him play a little bit longer, the night was over. And when that morning sun comes beating down, we would wake up in our town and they would be scheduled to appear a thousand miles away from here.