If you happen to be in Paris on July 23rd for The Rolling Stones, don’t miss this incredible act! 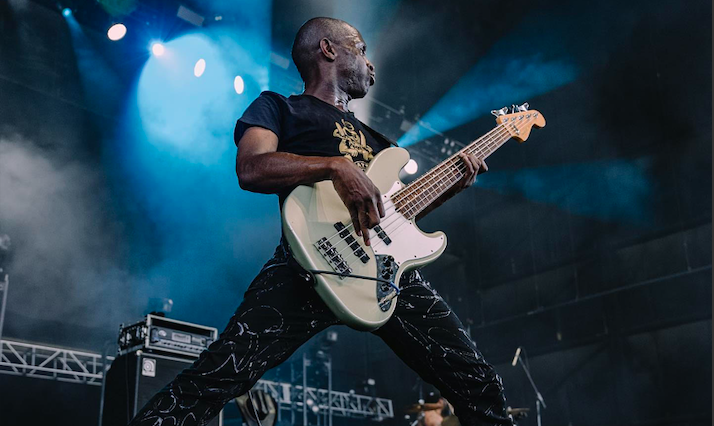 Seattle rock guitarist Ayron Jones is a rising star. Voted Best iHeart Radio’s New Rock Artists 2022, Ayron Jones is gaining attention both on stage and with his most recent 2021 release Child of the State. Specifically the four singles from the CD: “Take Me Away,” “Mercy,” “Supercharged,” and “Hot Friends.” The release has an 82% five star rating on Amazon’s customer review.

Squarely rooted in the blues from a young age, Jones’ sound is expansive and hard to pin into one sound as he includes hard rock, grunge and soul to the mix.

Playing festivals and coveted opening slots for major touring artists, the word is out. But opening up for the Rolling Stones this summer in Paris has to be one of the best gigs of the year.

American Blues Scene caught up with bassist Bob Lovelace to get some more details.

Is this summer your first tour of Europe? How is it going? What are your highlights?

No, I had the opportunity to tour Europe before with Seattle’s own Marmalade of Fremont. We played all through France and a little of Spain.

It went well. Highlights of this last Europe tour would be playing those gigantic crowds at the festivals. Hell fest was approximately 80,000 people. Playing for the Czech people also. After what they had to do to have freedom, it’s mind blowing to just play there.

Experiencing the Headliners like Kiss, Guns and Roses, Weezer, Green Day, and Metallica doing their things at the same place, and crowds that you played to, is a straight blessing!

How are the Eupoean’s audiences responding to your live performances? Are they already familiar with Child of the State?

Yes, they are. Plus they know the words. To be able to sing along with us in a language different from their own shows that they put so much more time into it.  Watching the mouths mimicking lyrics, it makes you want to play even better. They are grabbing this opportunity. They know we are from like, 7,000+ miles away. It just makes you want to give them the best that you have!

Have you found any music in Europe that particularly grabbed your attention?

The Smile. That was turned on to me in Belgium.

How long have you been with Aryon?

I am not sure. I don’t do time. We say seven years. But we’ve been saying that for like three.

How would you describe the chemistry of the band on stage? The dynamic?

Well, we’re brothers. So what we are off stage is what bleeds onto the actual stage. When you tour you spend a lot of time just together and know each other’s lives. It’s an honest bond that I feel transfers to the stage.

When will you be planning to get back to the studio? Any new music in the works?

Oh, the music is recorded and coming out!

Who are your favorite or most influential musicians that have shaped your playing?

The Beatles, Stanley Clarke, Jay Z, The Grateful Dead, Jefferson Airplane, Stax, Motown, The Beastie Boys… There’s a bunch. I thought I would list a few. I’m a hippie. I’m ok with it.

Being alive is one of the greatest gifts to receive in the Universe that we know. Love is the greatest invention of humankind. I feel having the ability to share and spread love is a mission of life.

If you happen to be in Paris on July 23rd for the Rolling Stones, don’t miss this incredible act.