“Music and art should reflect the world we live in and right now the world feels dark and heavy. The sound is a sum of the experiences and the feelings that inspired us during the recording process.” 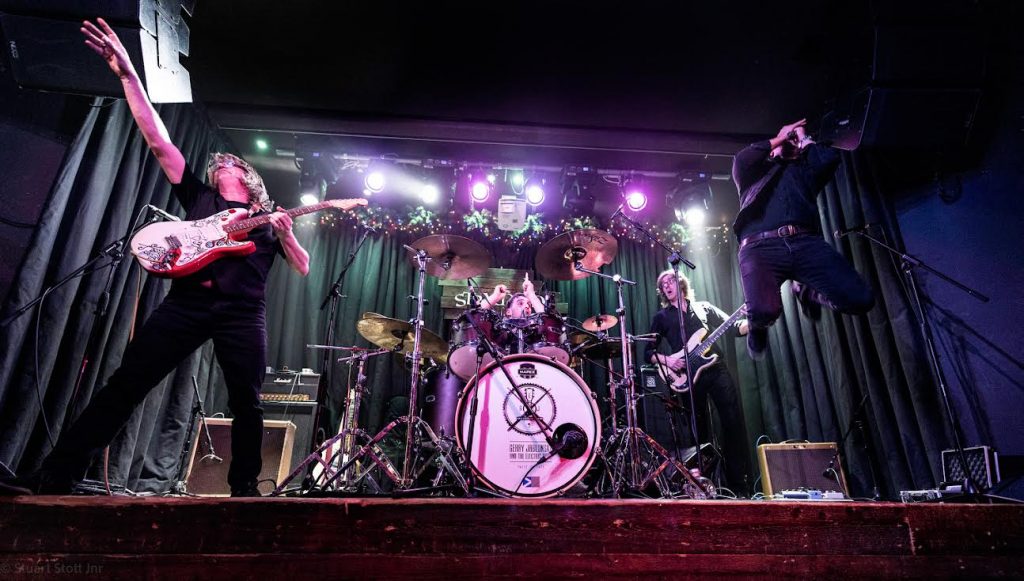 Sometimes, a video premiere is so inspirational that reading a traditional review seems an irrelevance because the priority is to watch it immediately. This is the case with ‘Hard Road” by the Gerry Jablonski Band, one of the UK’s hottest properties in the heavy rocking blues market. The popular and exciting band based in Aberdeen has released the track as a taster for their forthcoming album, entitled 105.

So, the following is all you need to know about the video:

Powerful and challenging visual effects which align perfectly with the climactic, changing pace and contrasting moods of the music; the bluest of blues themes reflected in the poignant, anguished vocals of both Lewis and Gerry, sung with passion and integrity, “I’ve told the truth, I’ve carried a heavy load/ It’s a one-way ticket to a hard road.”

Mesmerizing guitar riffs and sizzling, finger-blurring solos from Jablonski together with virtuosic, wailing harp playing from Peter Narojczyk; a combination of intricate and thundering drumming courtesy of Lewis Fraser plus one of the best rhythm sections in the business thanks to bassist extraordinaire Grigor Leslie.

Gerry and Peter tell the story behind the video and the forthcoming album:

“The art and music especially should reflect reality or be the reality of reflection… We walked into the studio on the morning of the Russian invasion of Ukraine. The terrifying events of the unfolding war started shaping the mood and the sounds we were creating. It seemed like the lyrics never meant so much before, the sound never felt so dark. This unknown and new reality deeply affected our music and performance during this session. The sound of the album is a sum of the experiences and the feelings that inspired us during the recording process.”

Peter adds, “ We went into the studio with a plan but as Mike Tyson used to say – “Everyone has a plan until they get punched in the mouth”. In our case that punch came from the unfolding war the very morning we started the session. Lyrically the forthcoming album comments on the current events – from the war (“Hard Road”) environmental disasters (“Heavy Water”), to mental health issues (“Tiny Thoughts”) or the high cost of living (“Breaking The Stones”) but it was never meant to be delivered with such an intensity. Music and art should reflect the world we live in and right now the world feels dark and heavy!

Just over half a century ago, a British bluesman recorded a groundbreaking album entitled A Hard Road, its eponymous track containing the following lines:

I been tryin’ to tell you people

That the blues hit me in my life

You know that I was born for trouble

And it’s a hard road till I die

John Mayall subsequently became the “Godfather of the British Blues,” introducing the blues to British audiences and helping to re-introduce the genre across the United States. Many blues artists have followed in Mayall’s footsteps and devoted their lives to playing the blues. Gerry Jablonski is one of those devotees who, with his band, is following the same path as his predecessors, reflecting and commenting on the trials and tribulations of contemporary life and treading the same “hard road” ahead.

Like Mayall and his Bluesbreakers were in 1967, the Gerry Jablonski Band, currently touring Eastern Europe, are rapidly heading in the direction of well-deserved international recognition and success.