The Salt Shed is a venue new to Chicago this year, and it provided a comfortable environment for fans -- even for this sold out show. 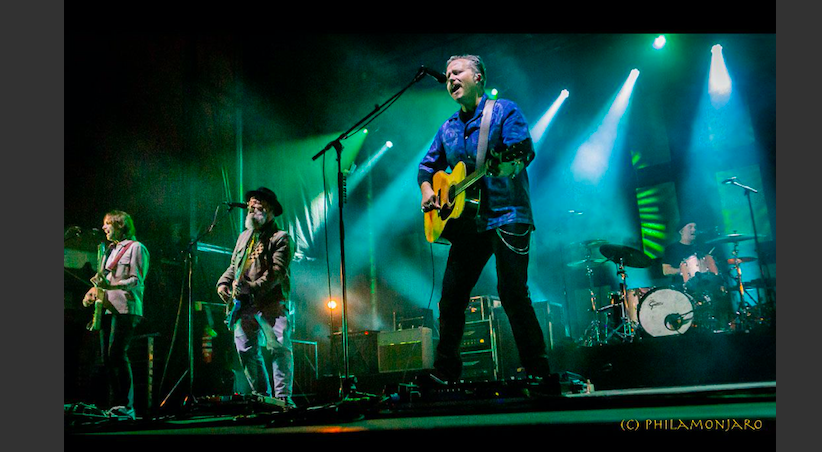 Jason Isbell and the 400 Unit gave a masterful performance at the Salt Shed in Chicago on Friday, September 23rd. The band from the Muscle Shoals area of north Alabama sold out the show, after playing another show at the Shed the day before to accommodate the demands of fans. Fortunately for those lucky enough to see both performances, Isbell and his band played different enough sets, so that they were worth seeing both nights.

Isbell’s 100-minute set on Friday included many songs from three of Jason Isbell seminal albums: 2013’s Southeastern, 2017’s The Nashville Sound, and Jason Isbell and the 400 Unit’s most recent major release from 2020, Reunions. And why not? These three albums represent Americana music at its finest, and are landmarks in the genre.

Opening with four songs from Reunions and two more from The Nashville Song, the 400 Unit provided a strong and steady background to Isbell’s compelling vocals. During “Outfit,” the first of two songs Isbell played from his days with the Drive-By Truckers, Isbell commented on a random strobe light in the crowd and let everyone know that he was “not looking for your light show to interfere with mine.”

One of the highlights of the set was “Honeysuckle Blue,” a Drivin N Cryin song with vocals shared by Isbell and Drivin N Cryin member/400 Unit guitarist Sadler Vaden, from the Georgia Blue album. Georgia Blue is a charity album released last year consisting of cover songs associated with the state of Georgia, which Isbell promised to release if Joseph Biden won Georgia in the 2020 presidential election.

Later in the set, the band played two songs in a row which won Isbell GRAMMY Awards for Best American Roots Song: “If We Were Vampires” (the 2018 Grammy Awards), and then “24 Frames” (the 2016 GRAMMY Awards).  The band closed their main set with two songs from Southeastern, “Super 8” and “Cover Me Up.”

The encore consisted of “Speed Trap Town,” and the show closed with a thunderous cover of the Fleetwood Mac (pre-Stevie Nicks and Lindsey Buckingham) song “Oh Well,” written by Peter Green.  As one fan stated leaving the show, “One thing ’bout them Southern boys – they still like to rock on!” Indeed!

Although it was a cool night last Friday at the Salt Shed, Jason Isbell and the 400 Unit brought the heat with their compelling performance.

The opening act was former Chicagoan (now living in California) Shemekia Copeland, who is touring in support of her fine new album Done Come Too Far. Copeland and her excellent band entertained the crowd with their 45+ minute set, singing two songs apiece from her last three releases: 2018’s America’s Child, 2020’s Uncivil War, and Done Come Too Far.  Copeland let the audience know that her album was released on August 19th of this year, the same day that her mother passed away. She also let everyone know about the crazy couple of years she has had, “I got cancer, I kicked cancer’s ass, then I got Covid, and I kicked Covid’s ass!”

Copeland sang part of a song that she said she’s been singing for 30 years, “Ghetto Child,” and when she went off mic for part of the song the crowd went quiet and many people got the chills; her voice is that powerful!

Towards the end of her set someone shouted out “You’re awesome” which seemed to be the consensus of the fans, most of whom were there to see Jason Isbell and the 400 Unit. Copeland’s reply to being called awesome was “I keep telling my husband that, but he says whatever, whatever, make me dinner.”

Copeland closed with the tour de force “It’s 2:00 A.M. (Do You Know Where Your Baby Is?” to an appreciative crowd.

The Salt Shed is a venue new to Chicago this year, and it provided a comfortable environment for fans, even for this sold out show – although the Shed would probably be improved by providing a screen to view the action on stage for those fans not near the front. Maybe next year?