Mike Morgan, a Fiery Texas Tornado with A plan A and B

Interview with Mike Morgan, whose new album was recorded with his band The Crawl and guest artists Anson Funderburgh and Shawn Pittman. 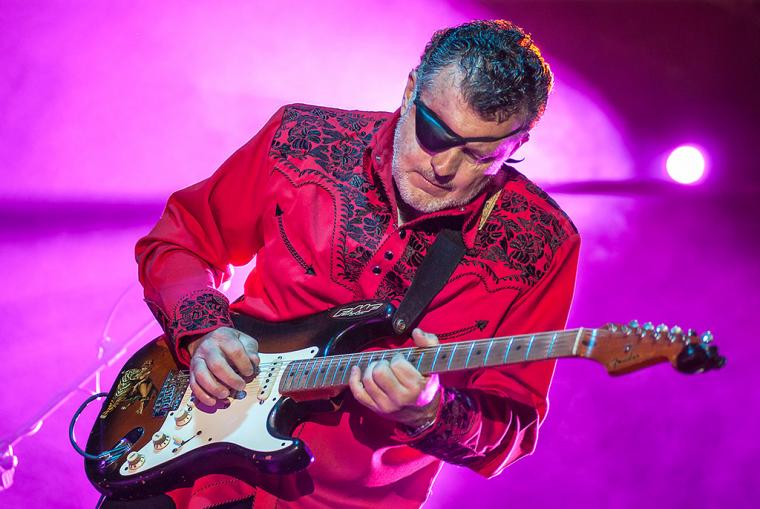 Artists universally are obsessive about creating their music and getting in front of an audience to perform their creations, but what if that artist has another obsession, one that takes them away from their art?

One that is potentially life threatening?

But one that sharpens their muse and takes the listener on the roller coaster with them?

Mike Morgan is just such an artist. He’s a Texas guitarist and songwriter whose first release came out in 1990. He has recorded eight albums for Black Top Records and Severn Records. His just-released Lights Went Out in Dallas marks the first release for M.C. Records and his 10th overall.

Mike loves the thrill of the wind against his face on fast motorcycle rides, an obsession that almost killed him at age 13. But he also loves to document that obsession in his music. The new album was recorded with his band The Crawl and guest artists Anson Funderburgh and Shawn Pittman.

Funderburgh is also co-producer on the album. He’s another Texas firebrand. The only artist to have played all of The King Biscuit Blues Festivals, he once told me, “If you’re thinking about it, the music’s coming from your head and not from your heart.”

The Crawl with Morgan takes the listener for a wild ride without a helmet. “I’m about to be 63, and I’m riding this mountain bike like I’m 17 and seeing how fast I can get my miles per hour average, but I guess things like that help keep ya younger, right?”

I’m not going to argue with a guy who wears a pirate’s eye patch and writes songs like “The Fracus By The Pecos.” That said, I just had to ask him about that eye patch but not until I’d gotten what I needed by the end of our interview.

“I lost my eye in a motocross race when I was 13 in 1973. I fell down, and a guy hit me. I’d just started racing. I was pretty good at it. I went across the finish line. My race was over, and my bike got janky and spit me off.

“There just happened to be a doctor standing right at the finish line. He was from West Texas, and his son was in the next race. The doctor looked out and saw how bad it was and jumped with the people in the ambulance.”

“He said, ‘You were bleeding and basically in trauma. You quit breathing. We lost you twice in the ambulance. I brought you back to life twice. You were choking on your blood. One of those guys had a cup of Dr. Pepper with a straw in it. I dropped that Dr. Pepper on the floor and took that straw out of your throat and threw it on the floor of that ambulance. You went out again, and I beat on your chest and sucked that blood out of your throat. Yeah, you were in pretty bad shape.’”

It never kept Mike from continuing to ride.

“No, I started back again as soon as I was ready to – it was crazy. It was a pretty bad addiction. I mean the second I could get back on a motorcycle, that’s all I wanted to do. If you’re racing dirt bikes, it’s not a matter if you’re gonna get hurt. It’s just a matter of how bad you’re gonna get hurt, and you just roll the dice and hope it’s not as bad as what happened to me.

“It’s been an inconvenience. But in a way, on the music thing, it’s been identifiable. People aren’t gonna misjudge me for somebody else. I could have lost an arm or a leg, and it would have been a worse deal. Losing an eye is more of an inconvenience than anything else.”

So, what’s he been doing for 15 years since he last recorded?

He once was the sales manager and buying director at a Suzuki shop. “And now I’m at the biggest Honda shop in the state. I’m the finance director there. The money is really great. Covid was the best thing that ever happened to the motorcycle industry and the bicycle industry. At some point it’s gotta slow down, but it’s still – business is booming. So, right now, I feel guilty like I’m not honing my craft, whatever you want to say, but I’m making a pretty decent living.

“We shut down the other dealership, I think it was May of 2018. And business had just gotten horrible from 2009 until the pandemic hit; the motorcycle business was pretty much nonexistent. So, we shut the other shop down, and I decided I was gonna start playing again, and I booked a tour and then after that, we started to kind of get going again and that pandemic hit, and it shut everything down, and the only gig I was doing here was a gig every Tuesday night where I play upright bass.”

I like the fact that Morgan has so many influences, and that he calls the band The Crawl. If there’s one constant in all these songs it’s that kind of crawling, lazy, swampy guitar and vocals. I like the album, a good album. “I appreciate it,” says Morgan. “There are three or four songs that are off the beaten path, “The Last Goodbye” and “Maybe,” and well of course, “The Fracus By The Pecos.”

“I’m gonna tell you how that happened. That little guitar part, the minor rhythm guitar part? I came up with that one time, and I thought, ‘Man, that’s pretty cool, but that sounds like some ballad a heavy metal band would do. I said, I can’t do anything with that, but I kept jacking around with it.”

The song includes the sound of a whip lashing and includes the lyric, “One eyed Jack turned around with all the smoke he could hardly see.  He took down two more with his Winchester 23.”

“I’m really, really into westerns. I mean I’ll sit around and watch the western channel. That’s all I watch.”

Was it hard for Mike to get back into writing songs again?

“You know what is weird about that is when I worked at that other shop for 15 years kinda on and off, I think I wrote one song. When I went back to work back then I think it was 2007 or 8, I put that record out. Then, I went to work at that other shop. Then, I worked until 2018 when we shut down. I wrote one song which is weird. I wrote “Working for the Man” (on the new album) being funny. They’re always talking about it’s weird working for the man. Yeah, I wrote that song, but I didn’t write another song for like 15 years.

“Then, when we shut the shop down, and I started coming home practicing and playing, I just started writing songs. It was five or six or seven we didn’t even record. They’re pretty sad songs, and we recorded more than we needed at that point. So, I still got five or six good songs for the next album.”

I told Mike I like “Ding Dong Daddy” because it reminds me of Chuck Berry’s early stuff from the mid-50s.

“Yup, that’s what we call rock and roll. And then the “Lazy Lester” thing too. I love that swamp rock sound. Me and Lester were pretty good buddies. We did some shows together, and he’d come in and spend the night, and he’d call me up on the phone and ask me and my ex, Pam, how we were doing, and just check on us, and I’d check on him. He was quite the character.

“(The pandemic) was an awakening, but not a rude awakening because I got busy.”

Earlier this year Mike and The Crawl did a four-week tour of Europe with stops in Denmark, Belgium, Holland, Germany, Sweden, and Luxembourg.

“I think it was a 12-day tour. It was either 12 or 14 nights in a row. And we had great crowds, sold tons of my old CDs, Black Top stuff and sold a bunch of Mike Morgan T-shirts and all the crowds were good. I was pretty much amazed at how well that went, and the money actually ended up being pretty good, and it was kind of surprising it all went as great as it did.

“I’m excited, I’m taking nothing for granted. Somebody told me the other day, “Well, Mike, at least you’ve got a plan B, and I said, ‘Well, actually right now plan B is plan A, and plan A is plan B.’ Right now, I’m considering my motorcycle job to be plan B at this juncture at this time.”

The Lights Went Out In Dallas