"It was as interesting to see the character that I was able to portray. And what was very interesting was the discovery that you could be on a hit record, but being in a hit film is very different." 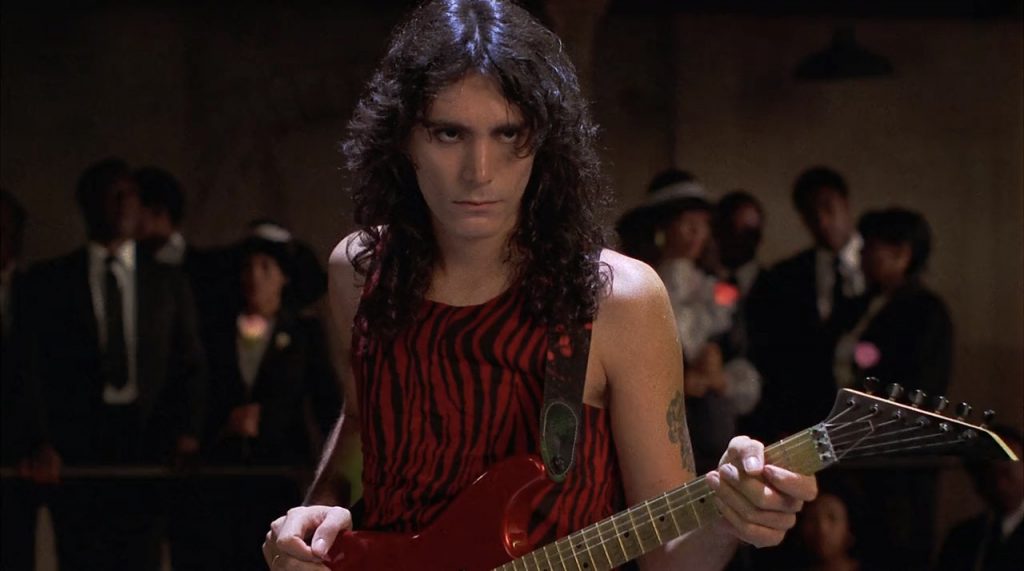 Steve Vai is currently on a 100-date tour promoting his latest album, Inviolate. The first song on this multi-million selling guitarist’s record called “Teeth of the Hydra” and was recorded on a custom guitar he created that has two headstocks, and three necks, 13 sympathetic harp strings and lives up to its name. A hydra is defined in Wikipedia as a many-headed beast that when it has a part severed, it regenerates. “Biologists are especially interested in Hydra because of their regenerative ability; they do not appear to die of old age, or to age at all.”

Blues fans know Steve best from his role as the devil who gets into a guitar duel with Ralph Macchio in the 1985 film Crossroads. The film – written by John Fusco and directed by Walter Hill – is an allegory based on the Robert Johnson myth of selling his soul to the devil at the Crossroads. He talked to me about how that went down.

When I look at the background on that, I’m not getting a clear picture. Apparently, the director wanted to go one way, and things didn’t go that way. From your perspective, how did that go down?

Well, what happened was virtually all the other things that came to me in my career were the result of something that has meaning in anybody’s life. You have an interest and you develop it, and you have something to offer. So, I love the guitar, and I made my first record Flex-Able in 1984.

There was a piece of music on it called “the Attitude Song” that was kind of a lot of guitar technique, and Ry Cooder who was scoring Crossroads called Guitar Player Magazine who had a copy of this song, and he was looking for somebody to work with him on that film. Of course, the film has that scene in it where it’s like a guitar duel.

They were working with other people, but it was turning into like a jam instead of like an actual drama scene, and they couldn’t really get it to work. So, Ry was looking for the right guy. He called Guitar Player, and they played him that song on the phone, “The Attitude” song. And he said, “So, that’s the guy,” and I got a call from Ry Cooder, and it was a stunner because I love Ry.

He got the script, and he’s explaining it to me, and I read the script, and it seemed very laid out, very clearly laid out was the script where it says Jack Butler (Steve’s Devil character) makes the sound of a freight train, and then Eugene (Macchio) has to follow that. So, I said, “Ok, I love drama. I’m a ham. I like theater. We’ve got to do this.”

I knew what was needed, and Ry and I worked on it. And at first it was an invitation to contribute the guitar parts, and that was great fun. I got to work with Ry, and I knew how to build the scene so it had theater in it, and it worked. Then, Walter Hill came in and he was very impressed, and he asked me to be in the film as Jack Butler. At first, I didn’t jump at the opportunity. I didn’t know anything about acting really. I didn’t know if I wanted to be an actor. Whenever I acted, it felt weird. I love great acting, but it didn’t feel authentic to me, you know.

I know exactly what you mean. It’s like when you go and watch a play and there’s music in the play. It never hits me the same way as when I go see a concert because I know you’re not directing it. It’s pretend. It’s not pretend. It’s real, It’s from the core.

Yeah, music plays all sorts of different roles, and the role I responded to the most was live settings in the moment of playing your ass off. It just appealed to me. So, I decided to do the movie, to be in the movie, and it worked out great. It was very interesting to see how the whole thing worked. It was as interesting to see the character that I was able to portray. And what was very interesting was the discovery that you could be on a hit record, but being in a hit film is very different.

Well, back then, the only way anyone was going to see you was if you were on MTV if you were a musician unless they went to a show but in a hit movie you’re in all the theaters. People recognize you on the street, especially that role. It was striking for people.

Yeah, my stepson runs a couple of gyms down in Florida and Georgia. He’s not a blues fan, but he loves that film, and it drew him in outside of his norm to see you and Macchio going at it.

Yeah, it’s funny. Most of the time when I’m talking to musicians, somebody says, “You know that movie Crossroads…” And they tell me the impact it had on them. It’s interesting.

As they say, the devil is in the details.