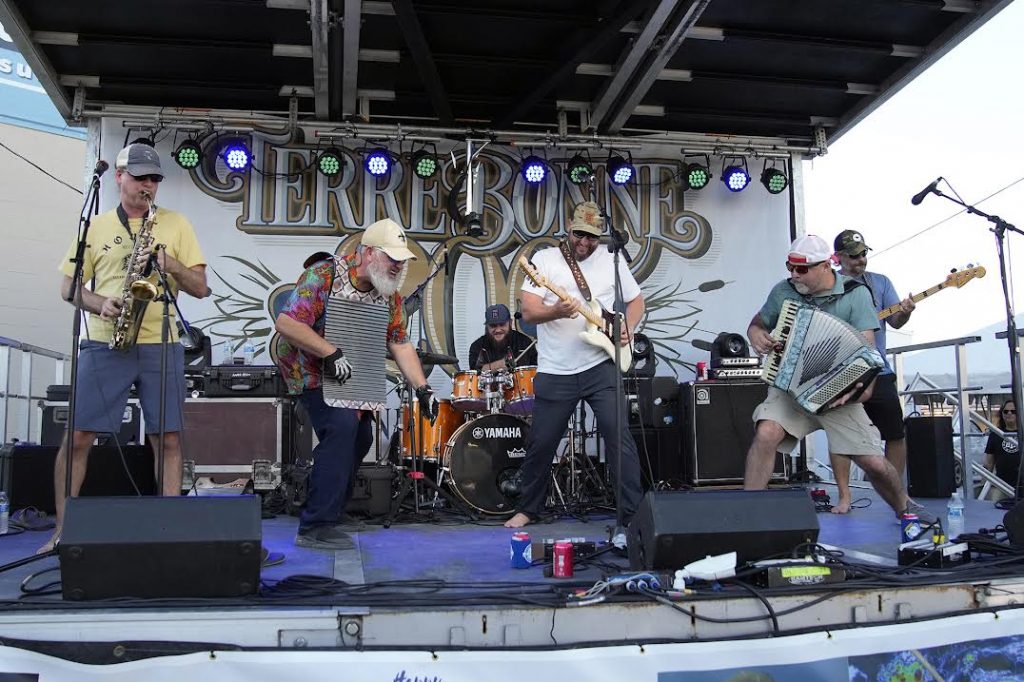 Nonc Nu & Da Wild Matous brought it to the streets of Houma, LA, to help celebrate its Bicentennial Celebration. The band members born and raised in the area didn’t disappoint friends and family on this special day. With some help from Tyron Benoit, it’s a jam people will be talking about for the next 200 years.

Terrebonne Parish, the 2nd largest parish (county) in Louisiana, with Houma, its biggest city, sits about an hour southwest of New Orleans, put on a bicentennial fest that included a ribbon cutting ceremony, crawfish pie eating contest, Cajun food, beers, arts and crafts, and last but not least amazing entertainment that had most folks not wanting to go home. Houma, a place you could retire, must be one of the friendliest and down-to-earth towns you could visit. On the bayou was the place to be on this perfect day in Louisiana, celebrating 200 years of their history.

Tyron Benoit (lead singer/guitarist/accordion) and his band started things out with a great little jam; this multi-talented musician switched off from his guitar to several accordions all afternoon. Benoit not only entertained the folks of Houma with his music, but his witty personality also had folks laughing as he cracked jokes along the way. Tyron, a native of Houma, performed covers with his bayou twist as well as his own stuff that had most tappin’ their feet. One of the highlights was when Benoit invited Elliot Guidry up to the stage to help on the washboard, the two feeding off each other Cajun style! A little bit later the stage manager signaled to the boys about running late and Tyron yelled into the mic, “You’re gonna have to drag my ass off this stage.” And to a delighted crowd they kept playing.

The first thing to note when it comes to these guys is the chemistry. They have it, and it is unreal to watch. They really do have a good time on the bayou. This “Zydeco Swamp Rock” as washboardist Elliot Guidry calls it, “we have been influenced by so many; we mix it all up and that’s what you get”. The band played all their own tunes save one, and they even threw in a little bit of a Bob Marley teaser on “Le Le Grouge.” NDWM started things off with “Can’t take My Buzz” and kept the momentum going with “Between Leeville” and “Fourchon,” “Le Le Grouge,” and “Down The Bayou.” The boys then put their spin on “Hurricane” (Band of Heathens cover), before jamming fan favorites like “Nutria Lady,” “Pet My Egrette,” and “$5 a Tail,” – just good, fun, party music. I’m not about to guess what the songs are about, but if you know the history of a Nutria or about hunting this rat-type animal, you will dig the tune “$5 a Tail.” As my new friends like to say, “This is how we party on The Bayou”.

Philip Porche is the frontman singing and playing some killer guitar solos; he seems to just go with the flow and feed off everyone else, but at the same time feeds the crowd and his fellow bandmates. It’s fun to watch Blake Coffman on Sax/Keytar and Michael Collins on accordion bring their own styles. Tim Terrebone on drums was serious as hell at times, then smiling and laughing like he was having the time of his life. Like a lot of the good ones, bassist Cody Guidry sits back, takes it all in, and gets it done. Not needing to be up front or recognized, just a cool cat with shades and bare feet. Enough said. Last, but not least, we have what I would call the eye candy of the band: Elliot Guidry on the washboard. All over the stage, I don’t think he ever stopped dancing. He kept both the crowd and his fellow musicians on their toes. A sight to see. Well done, sir. Your energy capped off an incredible set that was just the frosting on the cake.

If you get a chance to see Tyron or Nonc Nu & Da Wild Matous, you won’t be disappointed. A different style that most don’t get to experience outside of Louisiana, this music will have you up and out of your chair. Plus, they are very cool folks that will share some bourbon or a beer with you and talk LSU football.