Vanessa is a master at closing the divide between the lower chakra of blues fundamentals and an educated perspective of a contemporary woman navigating a fast-changing social structure. 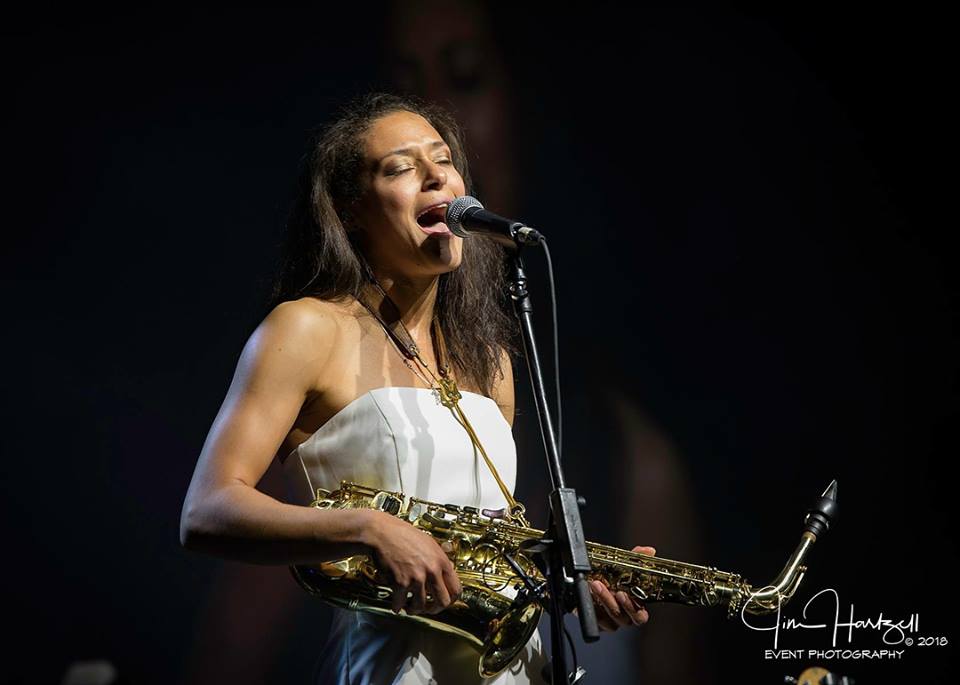 Vanessa Collier is on a major tour following the release of her Live at Power Station. This is an album at the pinnacle of a host of live albums by acts emerging from the hibernation of a pandemic that’s created a demand for the connections that only live performances can meet. Her four previous albums have proven her to be a major creative force in contemporary blues. This album recorded in front of an adoring audience at the Power Station studio rips the roof off her admitted shyness. Here she proves to be an enormously powerful performer who brings a sophisticated creative prowess to the emotional demands that blues audiences crave in their icons, assuring this still young lady a long and successful career destined to match the legacies of her progenitors.

“I think we all as humans need a form of expression however you get it out,” she told me a week before starting her tour. “We all need that. As an introvert I never had the words to say in the moment. I could always put it down on paper, and I just feel like that’s continuing. Ok, I’m gonna write, and then, ooh, this idea is great, and then all of a sudden, it’s a song essentially. Ok, cool! Great! Let’s see what we can do with the next album. What are we going for? What stories are we going to write? There’s simply intrigue, and there’s possibility that keeps this raging fire (burning).”

This woman defies all the standard cliches of the old guard blues legacies, having graduated from the prestigious Berklee College of Music with dual degrees in Performance and Music Production & Engineering. She walked away from a three-record deal with Ruf to be the boss of her own career after cutting her chops with Joe Louis Walker, the vastly underrated road warrior with half a century of touring behind him, a man who knows how to play an audience like a fine violin.

She learned her lessons well.

“My last year at Berklee I started touring with Joe Louis Walker. It was like a firecracker went off because I got to tour with him up and down the east coast. My final tour with him was a month-long tour of Turkey. I just knew from day one playing with him that he was like my people; one because he’s playing gospel, blues, rock, funk and soul all in one night and commanding an audience really, really well. I got my toes wet while touring. It was like this is meant for me. I love this. Even though I wasn’t making much money at the time, I didn’t care. It’s never really been about that. So, I credit Joe with teaching me my love for this music again. He’s the reason why I found blues again. I wanted to root my career in it.”

It was Livingston Taylor at Berklee who taught Vanessa how to overcome her shyness about live performing. “I’ve always been a very quiet shy person, but always knew that I wanted to be this great performer, and it just took me realizing you have to open up. You have to be much bigger on stage because it doesn’t translate to the audience. Even though it may feel like you’re doing this huge thing, the audience may not feel it unless you show them.

“I took two courses with Livingston Taylor on stage performance. And the one big thing I took away from that was you have to watch your mirror glances. You have to make eye contact with different people, and you just have to be yourself. You have to be careful to make your audience comfortable, and that’s how I’ve shaped everything since trying to be open and share stories about my life.

“That’s become easier over the years, but also makes the audience feel good and not feel like you’re putting on a show. You’re just showing them a different side, and that’s true for me. I’ve always been shy and quiet in front of people I don’t know, but in front of my closest friends it’s no problem. Like I’m crazy. I’m a little wild. (Chuckle)

“It was transformational for me. Everything I learned in that class was like, ‘Oh, ok, this is how you do this,’ whereas a stage performance, stagecraft kind of felt like a mystery to me. I wasn’t sure how to feel out an audience.

“Nervousness? Get that out of here. That’s about you. That’s not about your audience. You need to understand you have to make your audience comfortable. If you don’t make them enjoy themselves, they’re not going to come back.

“His overarching theme was you need your audience. Your audience doesn’t need you.”

Her education, and the tutelage by Livingston Taylor and Joe Louis Walker gave Vanessa the basic tools to put her active imagination to work in presenting her music. She says that on this tour she will not be doing just the same songs as on her live record. She’s done that. And she’s already looking ahead to the next chapter in her career.

“I’m looking towards writing for the next record, and hopefully instead of having three days of rehearsals and going into record like throwing four new songs into the set this year at some point and then going into record. So, it’s a little more creative for this year, but we’ll see how this shapes up. I have two records in my head. I have an acoustic record that I’d like to do duo with Laura (Chavez on guitar) and maybe have a couple of guest stars on it that would be more – I don’t know – delta-based stuff is what I’m thinking. A little bit more acoustic blues, folky.

“I haven’t quite decided obviously. The studio record is with the full band, and I’m still trying to figure out what that would be. They’re both in their infancy. I’ve been writing. I’ve just moved, and I feel super creative. So, I’m riding the waves. I’m really writing.”

Vanessa says in a press release, “I was going to say something philosophical about meaningful stuff, but then I remember that I have cake. Philosophy is for the cakeless.”

She is a master at closing the divide between the lower chakra of blues fundamentals and an educated perspective of a contemporary woman navigating a fast-changing social structure. She talks about releasing music on her own label. “This is what we’re dealing with today, and of course, things get thrown your way like Covid. So, I try not to think about the blocks, and just keep moving. I’ve been fortunate that the stars have aligned and I’ve just been able to push forward in some manner.”