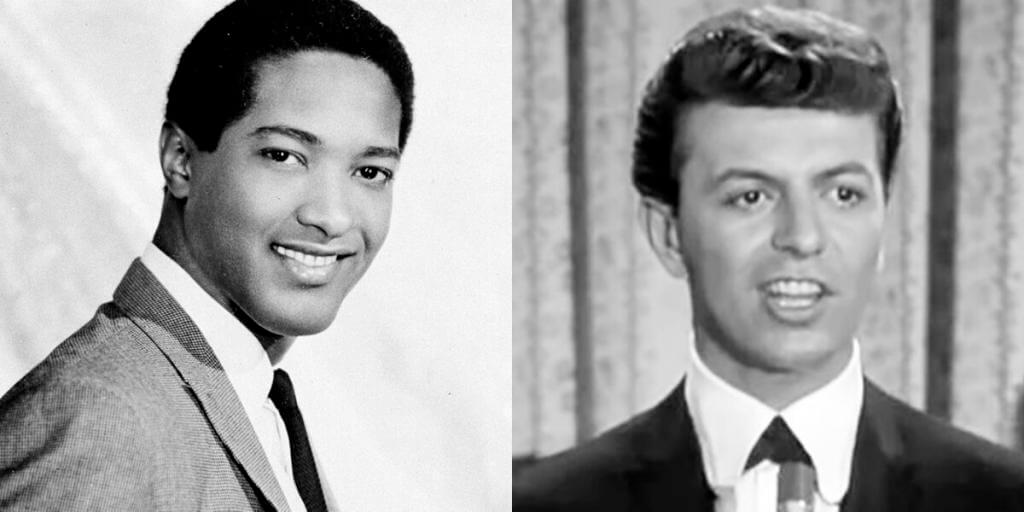 Dion and Sam Cooke were brothers of another mother when they toured together in 1962. 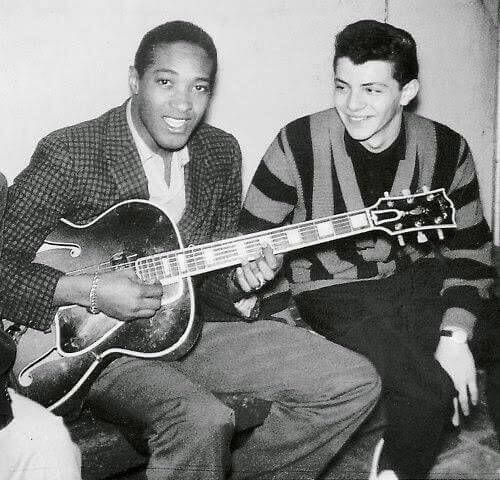 The lyrics are from Dion’s single “Here in America,” one of 14 incredible songs from the album Blues with Friends released last year. Dion wrote the song many years ago about his relationship with soul singer Sam Cooke. The two toured together in 1962. He shares vocals here with Paul Simon.

“I actually was wondering if I should put it on the album,” Dion told me in an interview, “but I thought the man is such a big part of our tradition and soul tradition, American soul tradition. Paul Simon and I would share that story.

“He (Sam Cooke) was a preacher’s kid, and when I first played Paul that song, he (Paul Simon) was thinking it was about racism in America, and then he realized why I wrote it. It was for both of us because I told him, ‘Sam Cooke was living out the gospel. He was loving his brother, and he was loving me, and he had compassion and understanding toward me on that tour, and that’s what that song is really about.’ ”

It’s been too hard living

but I’m afraid to die

‘Cause I don’t know what’s up there, beyond the sky

It’s been a long, a long time coming

But I know a change gonna come, oh yes it will

In the book Dick Clark’s The First 25 Years of Rock & Roll, authors Michael Uslan and Bruce Solomon recall a night in October, 1958 when the first live Dick Clark’s Saturday Night Show in Atlanta almost didn’t happen for Sam Cooke. The show was broadcast from the 44th annual Southeastern Fair.

“Sam Cooke already had had trouble at a motel in Atlanta that refused to accept blacks,” write Uslan and Solomon. “ABC was flooded with threatening letters. There were bomb threats, a Ku Klux Klan presence and the National Guard.”

Dick Clark asked Sam what he wanted to do. “I gotta go. That’s all there is to it,” Cooke told him. Dick smiled and nodded. This was no rare exception. The performers in Dick Clark’s Caravan of Stars often encountered hostel receptions at restaurants, rest stops and hotels across the south. White and black artists stayed in separate but unequal motels and hotels. The experience is a central theme in the Academy Award winning film The Green Book.  That film was the motivation for Dion to dust off “Here in America,” a song he’d previously considered too personal to release. Paul Simon also helped convince him to record it with him.

One of the lyrics in “A Change Is Gonna Come” was deleted in Sam Cooke’s original single: “I go to the movies and I go downtown/But somebody keeps telling me, don’t hang around.”

Those words only appeared on the LP. In fact, the song originally was the B side of the single “Shake” which went top 10 on both the pop and R&B charts. It would take decades for the song to become the anthem it is today. It has been recorded by many artists most notably Bettye LaVette who sang it as a duet with Bon Jovi at the first President Obama inauguration.

Dion and Sam Cooke were brothers of another mother when they toured together in 1962. “(Sam) protected ME in the south at that time. We went to see James Brown and The Flames, and I wasn’t treated good. But he protected me. So, I wrote the song a long time ago, but I never did it, but when I saw the film The Green Book I took it out of the drawer and dusted it off, and Paul and I did it.”

Down the block I saw the people stop and stare

You did your best to make a Yankee boy aware

I never thought about the color of your skin

I never worried about the hotel I was in

Dion loved Sam Cooke like so many who fight against racial hatred: “He was a very responsible, statuesque dignified kind of guy, you know? The way he walked, the way he talked. Much more than me. I was from the Bronx. He wasn’t aloof and struggling (like the character in The Green Book). There wasn’t that much of a bridge between us. He was down to earth, and yet he was educated. He was a pretty special kind of guy. He just had a lot going for him. Even Buddy Holly was like that. I guess the south – I don’t know what that has to do with it: the history, the spirituality – I don’t know. They were like before their time. They had so much going for them on so many levels.”