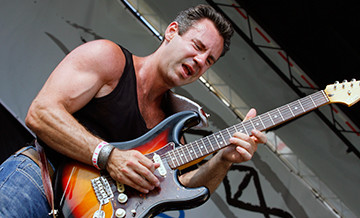 Tommy Z Blows Us Away with 'Blizzard of Blues'

Tommy's playing is emotive throughout, always lifting us up as we find ourselves moving to the music. 'Blizzard of Blues' is indeed a keeper ...

When Tommy Z issued his Sometimes album in 2013, he set a new standard for himself and others to aspire to. American Blues Scene wrote, “Tommy Z’s Sometimes brings back real guitar. This is blues that will kickstart your heart! It’s sexy, bluesy, fretboard magic; blues guitar, played the way it should be. You should bring this one home with you now.”

Well friends, Tommy has done it again, and y’all are going to want to bring his new album home too!  Blizzard of Blues on South Blossom Records contains  9 tracks, (8 of which Tommy wrote himself), and runs a wee bit over 52 minutes.

Personnel are Tommy Z – guitars, Jerry Livingston – bass, Damone Jackson – drums, and Kevin Urso on organ. The album was produced by Tommy Z, who also did a great job mixing, with a some help from Nick Blagona. Production is simple and precise, and the mix really brings out the nuance in these performances.

For those who have been waiting for this new music, Tommy does not disappoint. He and the band always bring a round fat sound that’s full, funky, and full of blues. The leadoff song, “Lovergirl” is destined to be a hit that will garner much play on satellite radio and internet blues shows. On “Blues for K.P.” and “Going to a Party,” Tommy recalls his hero, Stevie Ray Vaughan. In the same way Vaughan himself incorporated the influences of his heroes, Albert and Freddie King, so it is that Tommy pays his respects to Vaughan. He makes these influences all his own, working them, caressing them, and serving up a whole lot of tasty, original, bluesy guitar goodness for his fans to feast upon.

Other notable moments on Blizzard of Blues include “Bags of Cool,” with it’s brisk pace, joyous light funk, and “My Eyes (Keep Me in Trouble), a great throwback to the 1950s with a sweet, fat back beat. The album closes with “Al’s Groove,” a very savvy, sexy, and subtle blues.

Tommy’s playing is emotive throughout, always lifting us up.  We find ourselves moving to the music without even realizing it. Blizzard of Blues is indeed a keeper, and yes, you really should bring it home with you.