Ron Hacker came down with a case of the blues in 1956 and it’s been with him ever since. His latest release Burninshows why he has played every major festival in Northern California and all across Europe. His music has a little bit of everything for blues lovers and he is truly a master of the slide guitar. 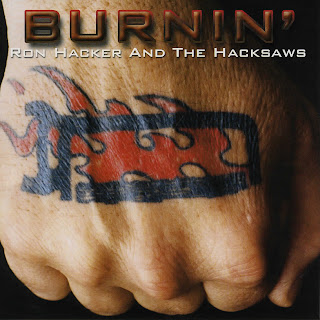 What you find on this release is some very well put together guitar work by Mr. Hacker. He has a style all his own but he is obviously very influenced by the Delta sound and I can hear some country blues in there as well.
He has a great voice for the blues and his gravely toned singing on “Almost Grown” works really well. The shuffle-beat combined with some masterful slide work makes this a fun song and I dare ya to try and not tap your foot while listening to this.

The track “Red Cross Store” introduces us to something that sounded like Hillbilly Country blues to me. He throws down another healthy dose of the slide on that one.

Ron Hacker has a great rhythm section behind him and they hold this together nicely, these guys are clearly well seasoned musicians.

The final cut on here is the title track “Burnin” it is two minutes and fifty seconds of brilliant guitar work. The song starts out with some great picking, matched perfectly with the slide. It keeps building into a frenzied pace and then it gets walked back down and just fades off into the distance at the end. In my opinion that was an excellent way to end this recording.

I found this CD to be very enjoyable. I didn’t hear anything on here that I wouldn’t listen to again.