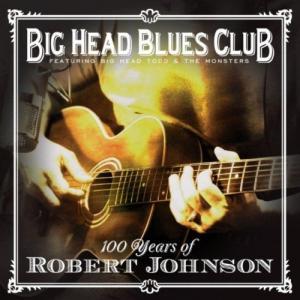 Big Head Todd and the Monsters, the Colorado-based, platinum selling rock band has assembled an all-star team of bluesmen to come up with a brand new “band” called Big Head Blues Club in celebration of Robert Johnson’s centennial birthday. The concept isn’t exactly original; cover Robert Johnson songs with blues musicians. Fortunately, however, the high energy, creativity, and obvious fun the artists had making the tracks gives it one of the most fresh perspectives on Johnson’s music since Eric Clapton’s iconic Me and Mister Johnson. Todd’s vocals are scratchy and wonderfully fit for the blues, and a large all-star blues lineup, including Charlie Musselwhite, B.B. King, Ruthie Foster and more create a range of diverse sound.

“Come On In My Kitchen” kicks off the album with slick electric slide guitar work and, thanks to a tight percussion, a cool, upbeat feeling. The Hammond B3 lends a fantastic addition to the track, which creates a feeling like the musicians were just having fun jamming down at Beale’s New Roxy. USA Today described David “Honeyboy” Edwards’ vocals on “If I Had Possession Over Judgement Day” as “ferocious”, and they are most certainly ferocious for anybody, let alone someone who happens to be 95. Lightnin’ Malcom plays thumping, hypnotic slide over Cedric Burnside’s aggressive drumming to form an impressively powerful cover. The Club also paid homage to the often overlooked fact that Johnson’s music was acoustic, performing a solid acoustic version of “All My Love’s In Vain”.

As a rule of thumb, the song “Crossroads Blues” is equally both a) a vastly important song to learn and appreciate and b) been covered to death. A cursory search on my iTunes shows I have just shy of 30 covers, all of which have been accumulated from one album or another, none of which were intentionally purchased save for Robert Johnson’s original. How do Big Head Todd and the Monsters remedy the “Crossroads” cover curse, (slight pun intended)? Bring in the biggest blues superstar on the planet, who’s name needs no mention. The duet is fantastic, with B.B. King and Todd trading vocals and guitar riffs, while a artfully placed B3 ties the track together.

All in all, this is a solid cover album in homage to one of the most influential guitarists of all time. Instead of taking a slower, menacing, or more downtrodden approach to some of Johnson’s more haunting songs, The Club opts to give the music a laid back, often bouncing beat, in direct contrast to the original tracks. This will no doubt drive away some fans expecting faithful renditions of the original blues songs. However, moving away from the heaviness and darkness of Johnson’s music allows the band to open up new avenues and make the music something broadly entertaining and fun. The band spent five days recording in Memphis at the famous Ardent Studios along with a half dozen blues superstars, and the result is a respect-worthy, vibrant perspective from a rock band who loves the blues.