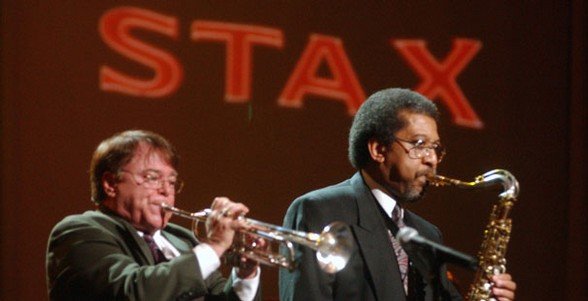 The Memphis Horns, Wayne Jackson and Andrew Love, have received the prestigious Grammy Lifetime Achievement award this year for their many vast musical accomplishments. The duo and lifelong friends have long been one of, if not the most impressive and in-demand horn sections in history, being a pivotal part of the trademark sound of Stax Records, and contributing their brand of soul to some of the most defining artists of an entire era, including Elvis Presley, Otis Redding, U2, James Taylor, and countless others.

“I took it as a point of pride, that a white and a black family in the south could work together and raise families together and love each other, and love what we were doing.” Said Jackson. “The two of us together were the Rolls Royce of Horns.”

Indeed, the brass-laced duo continue to be the hallmark of powerhouse horn sections, and made their impact, united by love of music, during a time and a place when Memphis and the south was still plagued by racial segregation & hate.

Jackson, introduced by Jay Seilman, the president of the Blues Foundation, made a surprise appearance beside his loving wife at the Orpheum Theater during the International Blues Challenge finals the weekend before receiving his award. On stage, the trumpet great was greeted by thousands of clapping fans, many who jumped to their feet when Love walked out. Clearly overcome with emotion, “We just never could have imagined this…” the long time side man began.

Though the award was one of the highest honors in the industry, it comes at a bittersweet time. Love declined to comment on this article, and did not make the trip to Hollywood to receive his award — fighting a long battle with Alzheimer’s and having been plagued with health concerns, much of which was largely kept close to the family until now.

Love was born just three days before Jackson in Memphis, and after his mother purchased his first saxophone for him, cut his teeth in his church. Eventually, the sax man found himself playing sessions at Hi Records until 1965, when the two musicians met, and quickly made history.

Wayne, born in Memphis in 1940, who was also given his first trumpet by his mother, and cut his teeth in his hometown of West Memphis, Arkansas until he received his first big break, playing for the Mar-Kays, an instrumental group that found widespread success at Stax Records, the world famous soul label located on McLemore Avenue in Memphis. After a dispute, Mar-Kays’ tenor saxophonist left the group, and, following a tip on where to find a great Sax man, Jackson and Love were quickly playing with all of the superstars of Stax — Rufus Thomas, Al Green, Isaac Hayes, Sam and Dave, and Otis Redding, among others.

Despite the pleading of the label owners at Stax, the two created The Memphis Horns, leaving the exclusivity of the label, and set out on their own.

By the mid-90s, the duo had transcended “sideman” status to be something of an institution of their own, putting out several “Memphis Horns” albums including the acclaimed Flame Out in 1992, and Memphis Horns in 1995, which included musical guests such as William Bell, Warren Haynes, Etta James, Leon Russel and Mavis Staples.

The Memphis Horns continued to be one of the most in-demand horn sections in the world.

In 2002, Andrew was diagnosed with Alzheimer’s disease, a degenerative brain disease which affects over 25 million people annually, and for which there is no cure — though there is medication that slows the process. The diagnosis was kept close to the family as they fought the painstaking killer. The two last recorded together in the studio in 2004, just before Love’s official retirement.

Late last year, the long time duo were given the news that they would be receiving the Grammy Lifetime Achievement award from The Recording Academy, possibly the highest honor that can be bestowed upon an artist for a lifetime of contribution to music. The Funk Brothers, of Motown fame, are the only other backing musicians to receive such an honor.

Saturday evening, Jackson received his award. For Love, his supporting, long-time wife and two of his children received his award on his behalf. “We just loved it. And we have had more fun than two kids from the south ever dreamed of having!” said Jackson in a video with local Memphis paper, The Commercial Appeal.

In recent years, Jackson has still been in demand as a horn player, even playing with Jack White on the theme song to a recent James Bond film. The buzz surrounding the Lifetime Achievement Award, where The Horns were in company this year with The Allman Brothers Band, Glen Campbell, who is also suffering from Alzheimer’s, and Diana Ross, has created a long overdue renewed interest in the huge body of work that the pair of musicians have amassed during their nearly 35 years playing together.

The musical genius of the men has finally been rewarded, and the addition of their Memphis-soaked soul sound on hundreds of songs over a career that spanned more than three decades has made a powerful impact on music and the world — a high and much-deserved accomplishment for an inseparable pair of  brass-playing friends from Memphis.