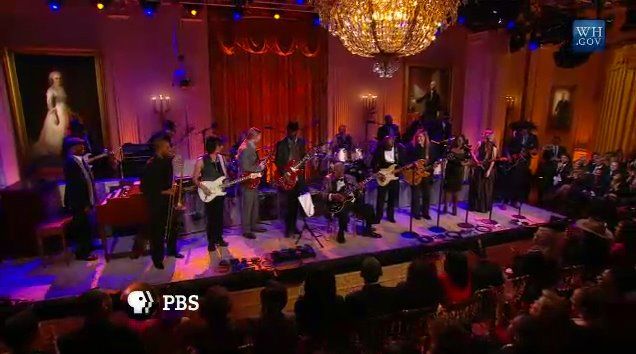 Despite all of that overwhelming blues power in the room, the scene that might have stolen the show was when the President of the United States, after some gentle prodding, couldn’t help but snatch a mike and sing a phrase of “Sweet Home Chicago”, a blues staple on his own hometown.

Buddy Guy, with his usual sly humor, announced that he’d heard the president sang some Al Green, and told him, “you gotta keep it up!” Mick Jagger joined the prodding and handed the President a microphone.

He couldn’t resist the calling, and to close out a superstar show and a widely publicized, unforgettable blues event at the White House, the president sang “Come on, baby don’t you want to go!” twice, handed the microphone back to B.B. King, and then took it back to finish singing the end of the song and the larger-than-life event.

To open the ceremonies, the president had some words about the blues.

And as we celebrate Black History Month, the blues reminds us that we’ve been through tougher times before — that’s why I’m proud to have these artists here — and not just as a fan, but also as the President.

The President continued his speech with a point that rang particularly true. “Like so many of the men and women that sang them,” said Obama after discussing Muddy Waters’ start in Mississippi, “the blues refused to be limited by the circumstances of their birth.” These words might never have been spoken in a more poignant setting. From the music’s humble beginnings “down in the delta” to it’s numerous resurgences and renaissances, as the blues has struggled under a lack of mainstream recognition and long-overdue praise, a President of the United States, along  with some choice friends, spent an entire night praising, lauding, and singing the blues.

Of equal importance is the fact that the celebration did not go unnoticed. On the front pages of news sources across the country, plastered across tops of major news sources are headlines that read, “Obama sings the blues with B.B. King”. Twitter buzzed with the event, “Sweet Home Chicago” was a trending term into the next day. Facebook lit up as tens of thousands of people tuned in and talked about the blues. Facebook and Twitter accounts of the artists that were on hand, such as Mick Jagger and Buddy Guy, with millions of fans, actively promoted the event.

The night of music and celebration sought to bring attention to blues music as an art form — a goal it has seemingly accomplished in spades. In part, it was because of the once-in-a-lifetime all-star performance, in part because it was hosted at the White House, and partially because a singing President will continue to dominate headlines. What more fitting music for a president to sing than a truly American art form, one that holds a special place in hearts and history of his own home town.