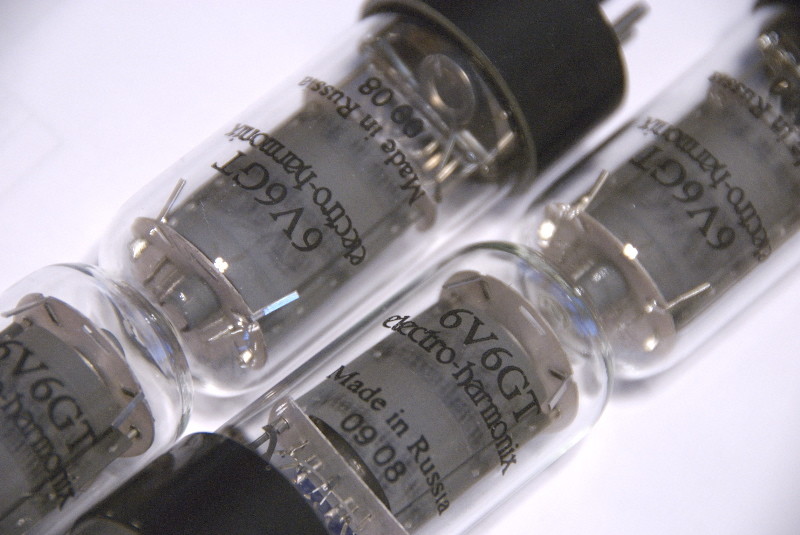 The namesake of the tube amplifier is the vacuum tube, a small but important component that controls the flow of electric current through a vacuum. Today American Blue Scene is going to look at power tubes. The tubes of an amplifier are easily recognizable when viewing it from the back. They are the glass tubes jutting down (or up, depending on the amp design) from the amp chassis. The smallest tubes are the preamp tubes, the larger ones the power tubes, and the largest is generally the rectifier tube.

The power tubes are part of the power amplifier stage of the amp. While the job of the preamp tube is to take the initial instrument signal, boost it and shape the tone, the power tube’s job is to, in turn, take that preamp signal and amplify it further, boosting it to the point that it can drive one or more speakers. While preamp tubes can do much to influence tonal qualities, power tubes also influence the overall tone of an amplifier, and changing power tubes can have a noticeable affect on the sound of an amp.

There are a variety of different types of power tubes. The 6V6 has been most often used for low and mid-powered Fender amps. They distort quickly and are characterized as sounding “growly,” a quality that has endeared them to any harp player or guitarist who has used a Champ or Princeton. The 6L6/5881 is generally used for Fender’s larger amps such as the Twin, and are said to be “glassy” at lower volumes with an aggressive overdrive that comes out as the volume knob goes toward eleven…or twelve! The EL84 is closely associated with the classic Vox AC30, clean and chiming when untaxed, warm and boxy when distorted. The EL34 is thought of as the sound of a Marshall with the throttle wide open, its tone influence described as providing midrange warmth with a looseness on the low end. The 6550/KT88 is a power tube known as being the most powerful of any listed above. The low end is tight, with a wood-ish overdrive, though this only comes into play at exceedingly loud volumes. This power tube is only used on some Marshall guitar amps, but is mainly known for its use on the Ampeg SVT bass amp. The type of tube can easily be ascertained by looking at the markings that are ink-stamped onto the side of the tube. This information should be written down and used when a musician is looking for a new set of tubes to ensure money is not wasted on improper gear.

Aside from all these different designs of power tubes, there are also different manufacturers. Many years ago the United States produced vacuum tubes, but that has largely changed in past decades. Today many tubes are produced in Russia. Often tubes from different companies are purchased from the same manufacturer and simply relabeled with the supplier’s name. Careful research can reveal the source of a company’s tubes so that excess money is not needlessly spent on similar quality tubes for brand name alone.

Power tubes can and do fail. Under regular use, power tubes should be replaced at least once per year. An amp that is only used for occasional practice in the living room may be fine with the same set of tubes for several years, but that same amp may burn through a set of tubes in six months if it is being gigged with five or six times a week. Signs of stress from the power tubes may appear as a scratchy sound, very loud buzzing or humming, crackling, low sound, or even no sound at all. Sometimes a tube may visually appear damaged, having no glow or emitting an odd color or even odor. These are usually signs if imminent failure, meaning the tube should have been replaced some time ago. A tube swap can be performed easily by carefully wiggling the tube free from its socket (it will be hot if it has been in use) and replacing it with a similar tube. The best practice, however, is to replace the entire set of tubes and have them biased at the same time. Biasing is like setting the idle speed on a car’s engine. It makes sure the tubes are operating at the appropriate voltage so that they don’t overheat and burn up quickly or run on low power and perform poorly (meaning that the amp just doesn’t sound as good as it did before). Having a mismatched set of tubes can cause the life and performance of all tubes to be affected.

Power tubes may not be the most glamorous piece of gear a blues player may encounter, but they certainly are important, and taking care of them will mean the difference between a satisfying playing session or frustration and even embarrassment. A little research and planning ahead will keep the amp running smoothly and the music flowing freely.