Cruisn' with the 44s "Americana" 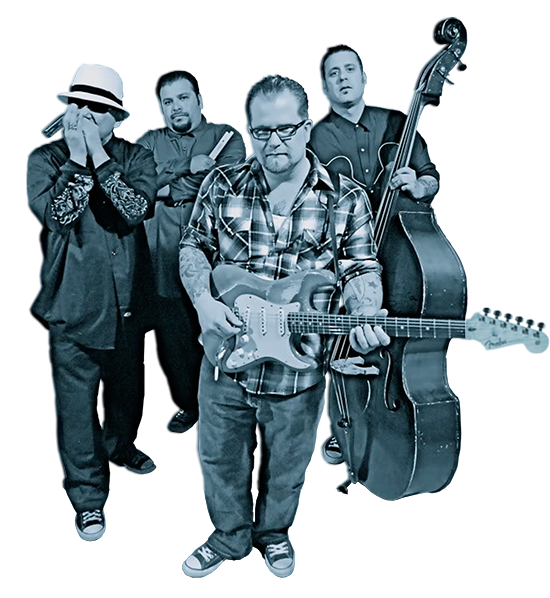 From rockabilly to an L.A.-meets-Chicago version of Piedmont slow blues, the 44s blast out of LA like the Dirty Harry namesake pistol with their second album from Rip Cat Records, Americana, a sojourn through blues styles and a couple covers with their distinct and energetic LA influences. Joined by producer Kid Ramos on guitar, and Ron Dziubla on horns, this album is full of the rocking boogie feel that Chicago and LA add to the traditional blues. If you’re going on a road trip, take this CD with you.

Take She’s Poison for example, the songs kicks right along despite the fact that the harmonica is driving while the guitars take a seeming Zen-ish approach to their presence. Plead My Case on the other hand has a definite guitar presence with the harp in the back ground as the slide rips off onto a solo, with harmonica echoes clipping along in the back.

The two covers on this album are You’ll Be Mine, by Willie Dixon, with an arrangement featuring the Ron Dziubla horns and a 50’s rock and roll groove. Mr. Highway Man enters the freeway with a nice cruising pace, and then the solos kick it up a gear to pass the slower drivers on the right. Then back into the cruise mode for an extended trip.

All through this CD there is a definite solid foundation of the rhythm provided by Mike Turturro on bass and J.R. Lozano on drums, with Johnny Main on guitar and vocals Tex Nakamura on harmonica. The vocals have a great blues timbre, and because this is a simple four man gig, no one has anywhere to hide. The solidness of this band is evident throughout. Tex’s harmonica playing (can anyone say Magic Dick of J. Geils fame?) often fills the role of the rhythm guitar and the balance this band has achieved instrumentally brings out everyone’s presence in a delightful whole that never lacks in engaging the listener. It’s like driving a 57 Chevy Bel Air convertible up and down the local strip or on Highway 66 to parts unknown. It’s got the power and comfort one needs to enjoy the trip.

Outside of Hanging Tree and Pleading My Case, written by the 44s and Kid Ramos and the previously mentioned covers, all the songs on this album are written by the 44s.  This is one of those bands that get’s it. Take the song Mr. Operator for example. It starts out with a cutting guitar with a bit of reverb, a very Texas blues sound reminiscent of Stevie Ray. In walks the acoustic bass. This hearkens back to Willie Dixon days, and then the drum with it’s almost lazy and steady beat, and the Memphis vocal styling of rhythm and blues and in one song, there is a tour of the blues of America, past and present.

This album opens with Hanging Tree, a boogie tune with a hint of Foghat’s version of I Just Want to Make Love to You, between the guitar of Main and Ramos and the harmonica of Nakamura, and has the typical “woe-is me-gonna-die” hard luck theme to it. And then the album drives us through the countryside through the eyes of the 44s, and we end on Hold On, (listen for how that last solo comes in!), a feel good song of love that leaves one feeling the good-bye is just a pause in the trip.

Those two songs bookend the new CD Americana by the 44s, a thoroughly enjoyable road trip. Make your day and pick it up.

Pick up a copy of Americana from Rip Cat Records