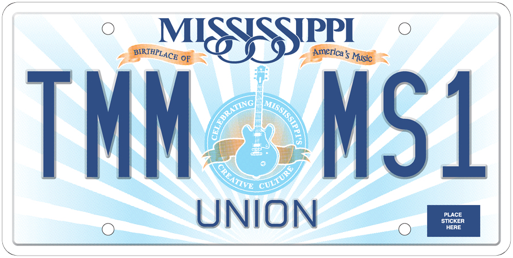 Beginning in October, the State of Mississippi’s license plates will be bestowed with the blues: B.B. King’s beloved Lucille.

Replacing the Biloxi lighthouse that had been on the plates for five years, artist Lucy Hetrick’s rendering of the internationally famous Gibson ES-355, a symbol long associated with the King of the Blues, will now reside in the center of standard license plates.

Perhaps no guitar in the world is more famous than “Lucille”, the name B.B. King has bestowed upon each of his guitars since the late 1940s. In nearly every picture of B.B. King that exists, his beloved instrument is either in his hands or close by his side. The iconic images, paintings, and sketches of B.B. all have Lucille close to his heart, and the two have been together for so long that one is nearly synonymous with the other.

A specialized license plate for the Mississippi Blues Trail already exists, with a majority of the fee benefitting the Blues Heritage Fund, but the upcoming new “Lucille” license plates will be standard issue.

The move is yet another display of in Mississippi’s strong support of the music that was born within it’s borders. Mississippi has shown a great deal of dedication to blues and music tourism, and is home several prominent blues museums, including the Delta Blues Museum, Highway 61 Blues Museum, and the B.B. King Museum and Delta Interpretive Center.

The timing for the plate’s release is fitting. Beginning this weekend and lasting for twelve days, the innagural Bridging the Blues will be host to dozens of events in the delta, including a number in King’s hometown of Indianola, Mississippi.