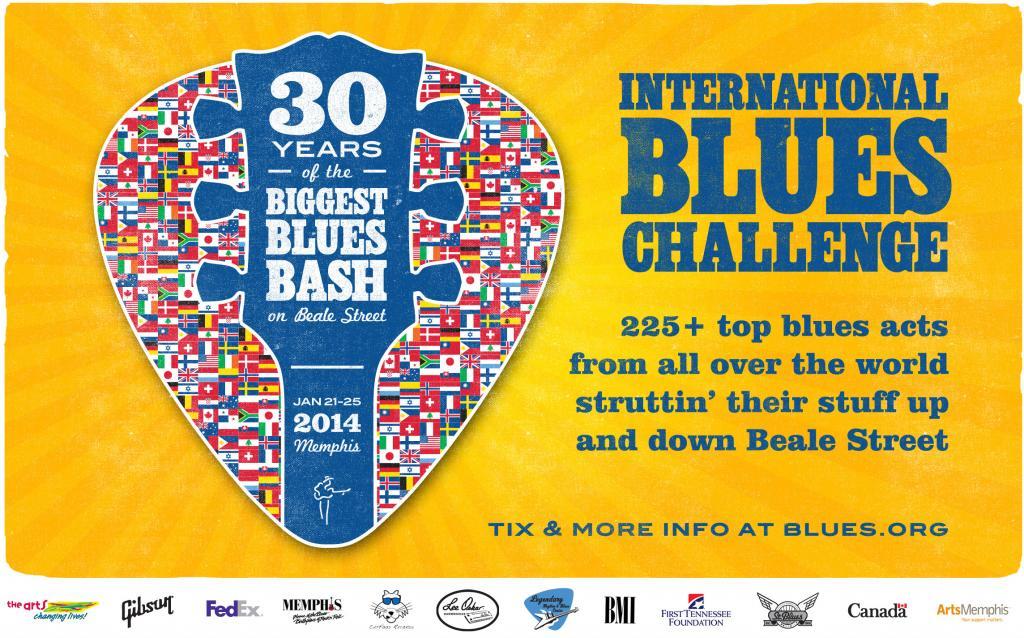 The landmark 30th annual International Blues Challenge is taking place in Memphis, Tennessee, “the home of the blues”. For people who don’t know the IBC, as blues fans around the world lovingly call it, it’s the largest gathering of blues musicians in the world, who compete in a week-long, “battle of the bands”-style competition for fantastic top prizes, prestigious guaranteed gigs, guitars, and more.

“IBC is the largest gathering of blues acts in the history of the world,” says Joe Whitmer of The Blues Foundation. “We say that every year and we mean it every year. This year, we’ve got 255 acts coming in from around the world.”

The Challenge, operated as part of The Blues Foundation’s key missions, is a battle between hundreds of blues bands and musicians who are sponsored and sent by various blues societies from around the world. Most societies have local competitions to determine the act that will be sent. Which means, for many of the bands that are at IBC, the road there has already been hard-fought.

Bands compete for cash, prizes, and industry recognition. One band and one solo/duo act each will win the top prizes, but winning the competition is far from the only goal many bands strive for. “Use this time to network and showcase,” says Ricky Stevens, who currently serves on The Blues Foundation’s Board of Directors. Stevens, who served as an IBC venue coordinator from 1999 through 2011, was part of the writing group for the current IBC rules and scoring criteria.

“Make contacts and do the things that you do best when you get onstage,” he recently suggested to the American Blues Scene Magazine. “There is way too much good music and way too many cool things to do to fit them all in one week. Take the time to truly enjoy the things you can and come back next year and the year after to fill in the gaps.”

The IBC takes place on the world famous Beale Street, which Congress officially declared the “Home of the Blues” in 1977. Twenty-two Beale venues take part in the Challenge, all within walking distance — some next door to one another. The setting could not be more appropriate: for over 150 years, Beale has hosted Blues music, entertainment, drinking, gambling, and even murder. Blues men have long frequented Beale, including the seminal Furry Lewis, Johnny Cash, Albert King, and the father of the blues, W.C. Handy, who was Beale’s most famous resident prior to Elvis. A blues bar bearing Handy’s name still exists on the street, as does a museum in his former home, honoring the composer’s mighty contributions to music.

As a young man, B.B. King was known as the “Beale Street Blues Boy”, which he eventually  shortened to “Blues Boy” and then just “B.B.”. Elvis Presley also frequented Beale as a young man, and throughout his life, always bought his clothing from the storied Lansky Brothers on Beale (now at the Peabody Hotel). “That’s what he said, ‘I put him in his first suit, and I put him in his last’,” said Hal Lansky, about his father describing Presley.

With the epicenter of blues history on the street, it would be hard to find a more perfect setting for a blues challenge on a global scale. “They should expect to see the best of the best blues acts from around the world,” says Whitmer. “These guys are not only coming here to compete but they’re also coming here to showcase and show that in each section of the world we’ve got an affiliate, the blues is going strong.”

“The IBC is the best networking experience and springboard a Blues Artist could ask for to excel their career,” Selwyn Birchwood told the American Blues Scene. In 2013, Birchwood growled and played, sang, and, at one point, crawled across the Finals stage at the Orpheum Theater like an alligator to win not only Best Band, but the Gibson Guitarist award as well.

Blues fans now cross oceans and travel from around the world to attend the magical January event every year. And because of it’s storied allure, the opportunity to see the very best in blues from across the world, and the chance to be a part of a “family reunion” while meeting new like-minded friends, the IBC continues to grow. Last year, 82 solo/duo acts were registered. This year there are 101. “All of the interpretations of the blues, there’s gonna be something for everybody,” Whitmer says, admiringly.

“Whether you’re into the delta blues or whether it’s rockin’ blues, etc., it’s all being covered here.”