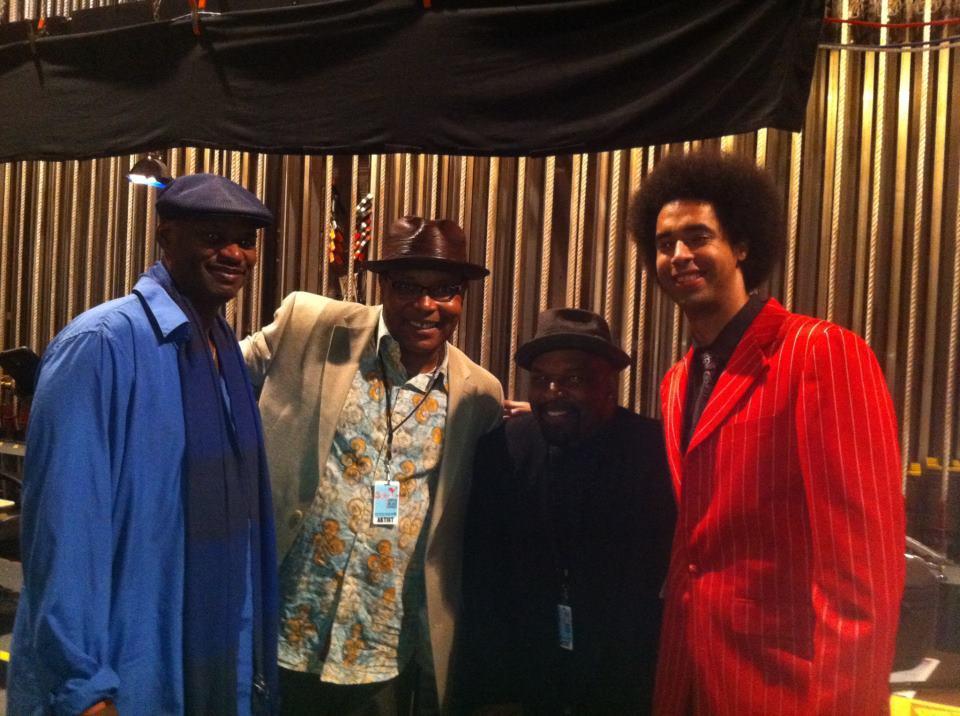 Perseverance definitely pays off. This past weekend an incredible 29th anual International Blues Challenge concluded in Memphis, Tennessee. IBC winner Selwyn Birchwood, won in not one, but two categories: Best Band (the Selwyn Birchwood Band) and Best Guitarist. Representing The Suncoast Blues Society (Florida), Selwyn and his bandmates really brought it this year! The IBC attracts talent from around the globe, and dozens of entrants attend each year. The level of musicianship at this event is exceptional, and coming out on top is quite an achievement.

American Blues Scene last spoke with Selwyn in June of 2012. He was busy playing shows as often as he could to hone his craft, and working to finish his Masters Degree in Business Administration at University of Tampa. Earlier that year, the Selwyn Birchwood Band finished 9th out of the 225 entrants at the IBC. We were privileged to catch up with Selwyn again earlier this week. He spoke with us about the IBC experience, his awesome band, his upcoming CD, and plans for the future.

Selwyn has had a busy year since we last spoke with him. “We just stay busy working, trying to play as much as we can. We did the Daytona Blues Festival. We did the opening (of) the Bradenton Blues Festival. We’ve been recording this CD, which is good as well. We were able to nab Joe Louis Walker while he was down and he played on the CD, which was awesome. We did some shows opening for him last year. We’ve been trying to get this CD done as the main focus.”

People often don’t really appreciate all that is involved, and all the effort that goes into attending the IBC. Besides the musical aspects (playing at an extremely proficient level, showmanship, etc.), each artist has to fund their trip and the associated expenses. Selwyn and the band held fundraising shows, and  he even sold two of his guitars to be able to make the trip this year. “Yeah, they were both Epiphones, kind of 335 style. I ended up selling those just to get the money to get up there. That’s what I was really worried about because the last year, I’ve just been doing music full time. I haven’t had any sort of a day job. So I’ve just been trying to make it through and stay afloat with the band and the bills and everything. When I had a day job, at least the one last year, I was able to, you know, save up some money and be able to cover the rest of the expenses. But if we didn’t have enough this year, I was just really worried because I didn’t have any sort of income to subsidize it, so I was starting to find everything I could to sell stuff. With the fundraisers and everything, we ended up having enough; we got a huge outpour of support from the Tampa Bay area and also we did a fundraiser with our buddy RJ Harmon & Company, in Orlando, and we got a huge amount of support over there. So, it was enough to get us up there without having too much. It was a little bit tight, but I didn’t have to worry about being able to make the trip, which was an actual worry for me before those fundraisers.” Along with all that, Selwyn also finished his Masters Degree in Business Administration at University of Tampa, graduating December 15th, 2012.

Selwyn leads a stellar group of musicians that are the Selwyn Birchwood Band, and he is quick to express his respect for their talent. “I say it every show. I’m spoiled to play with the guys that I do. It’s one of those things, I was just blessed; the right time, and the right stuff going on to be able to pick these guys up. I’ve got Curtis Nutall on drums who I had known from Orlando for years. Curtis is a smoking musician; he was Joe Louis Walker’s drummer for about five years. He played with the Blind Boys of Alabama. He grew up in Chicago; he plays anybody from Albert King on down.

“And then on bass, I have Huff Wright. Same thing. I mean all the guys I play with are guys I was able to nab from touring bands. He’s toured and played with Lucky Peterson and Joey Gilmore, and backed some other recognizable players. My sax player, Regi Oliver, he’s played with Joey (Gilmore) and Lucky (Peterson). He’s just played with a ton of people, too many people to name. So, they’re all just fantastic musicians and I tell everybody at every show, I’m just spoiled to have these kind of guys playing in my band. I’m really grateful, and we all get along and have a good time. So when we get up there, we’re just having the time of our lives, so, it’s a good thing.”

When asked if the intense schedule he and the band kept this past year, as well as working with Joe Louis Walker and others helped raise his level of play, Selwyn replies, “The IBC thing is kind of weird because a lot of people get reved up; it’s like ‘Well now we have to really put on a show, and we gotta do this, and that, and the other.’ We, I, felt we are a little bit different because, I mean anyone that has come to our shows in Florida and stuff  can tell you that is stuff that we do already. We’re just trying to put on the best show that we can, and try to make some noise. The way I look at it, if you make enough noise, then people have to pay attention to you, so it’s something we have been working on. I’ll do whatever I can to try and get a rise out of the crowd. You know, to have people come back and be talking about us. That’s the only way I can see to keep working within the amount of bands; the amount of people wanting to do the same thing, you have to do something to set you apart. But when we get to IBC, it seems like everyone is trying to ‘switch on’ then, but I feel like it’s something we do every show. We show up, and we wanna throw down! So it doesn’t change for the IBC, that’s something we do all the time, and we want to do all the time.”

The band played five songs from their upcoming CD, Hoodoo Stew, at the IBC finals: an instrumental, “Florida Shuffle,” “Addicted,” “River Turned Red,” “Creeping Green Gator,” and “Hoodoo Stew.” The band is working to finish up the CD, due out later this year. “(It’s) a lot of the original songs we’ve been playing for a while. The title track is called ‘Hoodoo Stew.’ I like to try and do a mix of different styles, so we have a little bit of Funky blues on there, we have rootsy Delta blues on there, a little bit of rock-i-er blues. Trying to put as much of a mix as we can. There’s so many different styles of blues, I mean you can’t just play the one thing. You can’t just play Jump blues, or Delta blues. I have too many different tastes that I listen to, styles that I like, to just stay with the one. So I try to do a few different styles of the blues on this CD.”

So, what has it been like since winning at IBC? “When you get that bump in publicity and attention, people are a lot more willing to take a look at you. Rather than essentially, ‘unknown band x from Florida,’ it’s ‘2013 International Blues Challenge winner.’ So, people definitely take a look at you a little closer. You know, there’s so many people fighting for the same work that you have to have some sort of notoriety, some kind of pull. It’s kind of that catch-22,; to get a job you need the experience, but how do you get experience if you don’t have a job type of thing. So, it helps out with catch-22 problem.”

If you get the chance, definitely try to catch up with Selwyn this year! “When you come to a show, you see four dudes, or however many people on stage, doing what they love doing. We do everything we can just to play the best music we can (and) try to give the people what they want.”