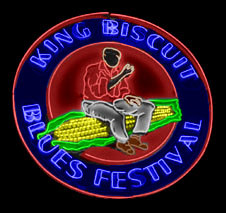 The King Biscuit Blues Festival, one of the oldest and most culturally significant festivals in the country, has announced their long-awaited 2014 lineup!

King Biscuit, held for three days on Columbus Day weekend for 29 years, is named for Helena’s renowned live blues radio program, “King Biscuit Time.” It celebrates the heritage of the town where blues greats like Sonny Boy Williamson and Pinetop Perkins once played every night of the week. One of the biggest events in the area, tens of thousands of blues enthusiasts converge on historic downtown Helena, Arkansas to hear stirring, uplifting performances of an American art form on the banks of the Mississippi River.