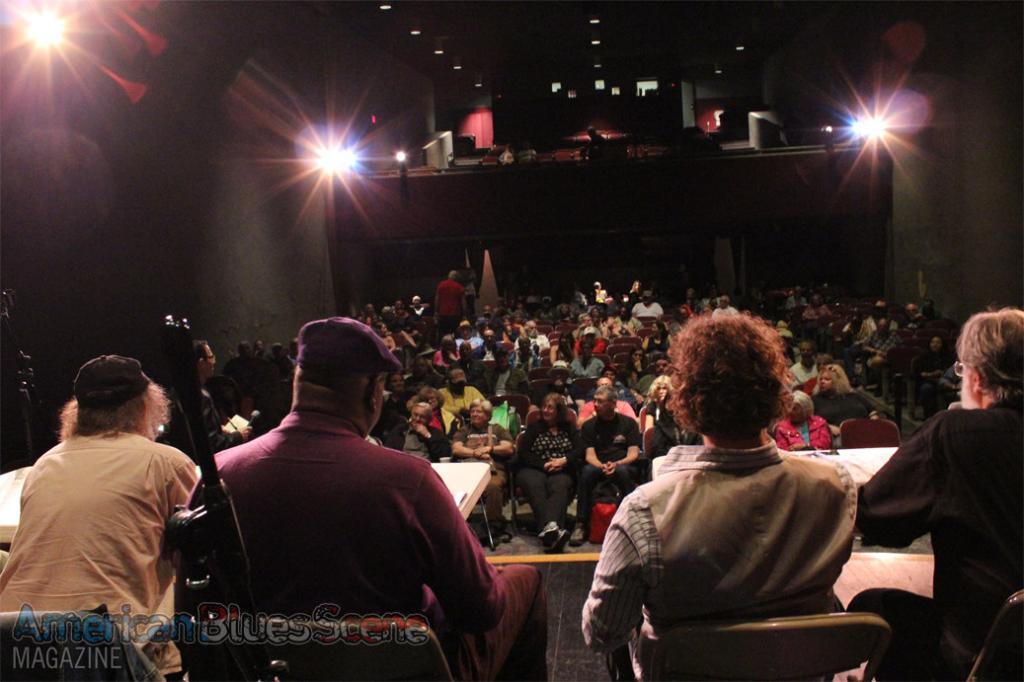 Legend has it that Honeyboy Edwards was arguing with a group of musicians at Sun Records in Memphis about the origins of blues. He stopped the conversation cold and said, “Hell, you guys didn’t have any music up here until we brought it up here.” The fourth annual Call and Response Blues Symposium features storied musicians and industry vets from Boston, Nashville, New York, and Missouri, but Helena, Arkansas and the King Biscuit Blues Festival remain the cradle of America’s music, and the symposium will address why.

This featured event of the 29th annual King Biscuit Blues Festival, America’s foremost showcase of authentic blues begins at noon on Saturday, October 11, at the Malco Theater on Cherry St.

Bubba Sullivan has been involved in booking and hosting King Biscuit for all 29 years of its lauded history. He joins Nashville singer and guitarist Nick Nixon, and Boston’s acoustic duo Paul Rishell and Annie Raines at noon in Part One of a freewheeling discussion with King Biscuit’s own award winning blues journalist Don Wilcock and Matt Marshall, editor of American Blues Scene, the most popular blues website in the world.

The fourth annual Call and Response, The Blues Symposium is free to the public thanks to the support of these wonderful sponsor:  Economy Drugs.

Bubba Sullivan likes to tell people that Robert Lockwood, Jr. carried more history to his grave than any man that ever was. Truth be known? Bubba’s in the same category except he’s still with us. The historian for the Sonny Boy Blues Society, he’s been involved in booking and hosting the King Biscuit Blues Festival since the first one in 1986 when he helped secure an evangelist’s trailer as the first stage for $25. He’s proprietor of Bubba’s Blues Corner, the official record store of the festival that was jump started with the encouragement of ZZ Top’s Billy Gibbons.

“Rousing interpreters of country blues, the original acoustic style that gave birth to electric blues, R&B and rock,” is the way the dean of Boston folk journalist Scott Alarik describes this W.C. Handy-winning duo together for 22 years.  Rishell’s students have included Susan Tedeschi and Michael Tarbox of Boston’s Tarbox Ramblers, and Paul’s a visiting artist at Berklee College of Music. Annie is one of few female harp players.  Together they interpret the country blues of artists like Son House, Blind Lemon Jefferson and Little Walter with a muscular verve that makes you believe you’re presence for their birth.

Nixon was born and raised in Nashville and sang lead for one of Music City’s first integrated bands, King James & The Sceptres and was part of that city’s Jefferson Street blues scene in the ’60s. King Biscuit favorite Anson Funderburgh produced Nixon’s two most recent CDs with Andy T, Drink, Drank, Drunk in 2013 and Livin’ It Up in 2014, both on Delta Groove.  His comfortable, easy going vocals may remind you of Anson’s late partner, Sam Myers. Nick sang opera in high school, befriended a pre-fame Jimi Hendrix in the early ’60s and was signed to Chess Records in the 70s. He’s played with Elvis Presley’s first guitarist Scotty Moore, Lazy Lester and Rufus Thomas.

Matt Marshall is the Steve Jobs of tomorrow’s blues journalism. The Editor of American Blue Scene, both the fastest growing and most popular blues music website in the world and a burgeoning quarterly subscription blues magazine. With 400,000 visitors a year and hundreds of thousands of fans on Facebook, Matt and his staff break news stories and channel the very heart of the blues community. It’s as much about connecting people who love the blues with each other and the music as it is about being able to connect them across the internet, capturing the pulse of the blues community, and reporting real news to blues fans. Whether it’s an intimate discussion with blues icon Buddy Guy or being the first to break the story of Johnny Winter’s passing, Marshall understands the relationship between contemporary blues culture and the digital frontier.

Award winning editor, writer, film maker and blues society founder Don Wilcock organized the Call and Response Symposium four years ago. He has interviewed more than 4000 artists in nearly a half century as a music journalist and was writing for Blues World in England before there was an American blues magazine. This year his definitive history of the Blues Foundation appeared in the Blues Music Awards program.  He is a recipient of the Foundation’s Keeping The Blues Alive in Print Journalism Award. His “Crossroads Revisited” column is on site regularly in American Blues Scene, and he’s a weekly music columnist for two dailies in New York’s Capital Region. He is the author of the 1991 authorized biography of Buddy Guy Damn Right I’ve Got The Blues that set the stage for Guy’s multi-Grammy-winning career surge.

L.C. Ulmer was born August 28, 1928, in Stringer, Mississippi — one of 14 children. He grew up working in the fields, and he learned to play blues and gospel from his father as well as others in the community. In Blues Revue, he recalled: “They would all get up under the porch for some singing every evening when they came out of the fields.” Ulmer came to the blues world’s attention through his appearance in the blues film M for Mississippi. He has since traveled to festivals as far away as Italy, Norway and Israel. He currently lives in Ellisville, Mississippi, where he teaches younger blues musicians to play.

The southpaw bluesman known as “Gearshifter” was born Louis Arzo Youngblood on Valentine’s Day 1953 in Picayune, Mississippi. He began playing guitar around age 12. Gearshifter’s grandfather, Arzo, was the nephew of early Mississippi blues great Tommy Johnson, and it was his grandfather — and grandmother — who taught him Tommy Johnson and other blues songs. In 2012, Gearshifter co-starred in the film We Juke Up in Here! He has traveled to festivals in the U.S. and abroad, recorded an independent CD and will soon appear in the blues web series Moonshine & Mojo Hands. He lives in Jackson.

Born in Chicago in 1958 to blues harmonica legend Snooky Pyor, Richard “Rip Lee” Pryor always yearned to follow in his famous father’s footsteps. He messed with his father’s harps every chance he got and eventually played with him. Later, his father left the music scene, and it wasn’t until the early 1990s that Rip Lee helped convince his father to start playing again. They performed and recorded together before Rip Lee’s own music career was sidelined by “life.” After a bout with cancer in 2010, he reevaluated his goals and returned to the blues — touring South America and Switzerland. Recently, he released a new CD.

The Mississippi blues world’s latest (re)discovery is Leo “Bud” Welch. Born in Sabougla, Mississippi, in 1932, it took 81 years for Welch to see the release of his first album. While known for his energetic, live blues shows, the album is actually gospel. He was a hardcore bluesman until 1975 when he converted to gospel. Still performing at two area churches most Sundays, Welch has been playing clubs, jukes and festivals around the region and even overseas for the past year and a half thanks to the efforts of his friend and manager Vencie Varnado. Welch lives in Bruce, Mississippi, but his bags are always packed.

Roger Stolle owns Cat Head Delta Blues & Folk Art store in Clarksdale, Mississippi. He is a Blues Music Magazine columnist, Juke Joint Festival co-founder, Hidden History of Mississippi Blues author, former Sirius-XM Bluesville contributor, and co-producer of blues films like M for Mississippi and We Juke Up in Here. He is co-creator of the forthcoming blues reality show Moonshine& Mojo Hands and a recipient of both Keeping The Blues Alive and Blues Music Awards. An authority on Delta blues and tourism, he has been quoted by The New York Times, The Economist and Travel+Leisure. His web site is www.cathead.biz.