King Biscuit Blues Festival – The Jerusalem of the Blues 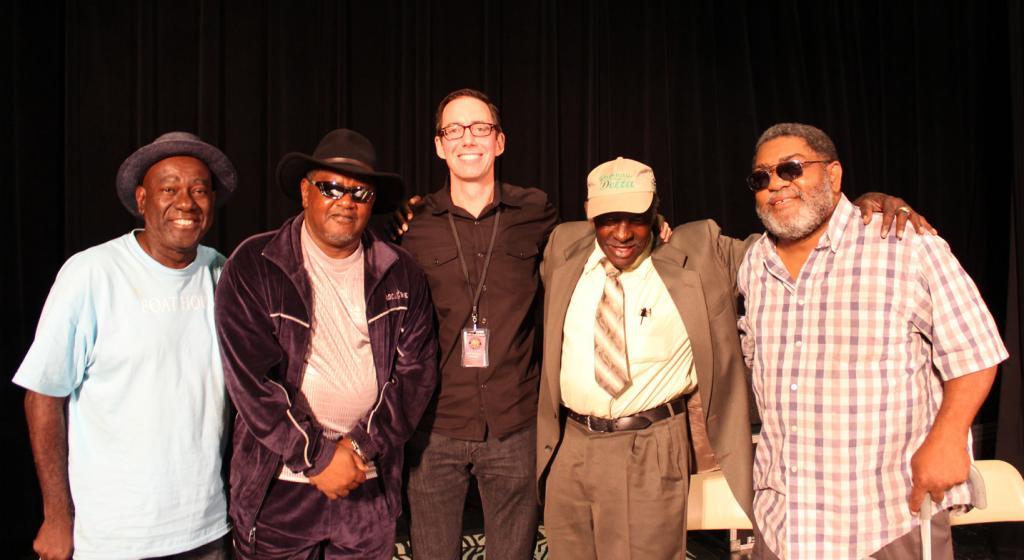 Festival logic says that the headliners are the high point of the show, that the last night is the capstone, that buskers are acts not ready for prime time on stage and that the minor stages are just that. The 39th King Biscuit Blues Festival in Helena, Arkansas defied festival logic. The opening act on the main stage was one of the best of more than the scores of performers. One of the buskers performing all day for two days is a 40-year veteran who’s released 17 CDs, and the most energized act I saw performed at 1 in the afternoon in a room no bigger than most people’s living room.

Mr. Sipp was this year’s International Blues Challenge winner and clearly the best of the finalists in that Memphis competition, a statement I can’t make for most of the past winners’ performances. A veteran of 25 years as the gospel singer/songwriter and producer Cat Cole, this Mississippi born performer began playing guitar at six and first took the stage at eight. As one of the prizes of winning the IBC he had the honor of opening the Biscuit Thursday morning, October 9 at 11:30 with a set that channeled two of his mentors, B. B. King and Albert Collins, while updating their style with original music and jumping around the stage in spasms as if his guitar strings were attacking him back. Traditional enough to be a comfortable decendent of his mentors but original and contemporary enough to make him a contender.

He and his band had been playing blues only a few weeks when they played the 2013 IBC. They knew only three songs, and when they made it into the finals they ran back to their hotel room and wrote a fourth song in order to have enough material to fill their allotted time. The song “Hey Hey Hey Hey” is on his It’s My Guitar CD. This year he took first place with the same song. Many remembered him for no other reason than the black-framed WalMart glasses with tape holding the frames together at the bridge.
There’s no glass in those frames.

He wears them because his daughter was picked on when she got similar glasses in the third grade. “At that point, I was working on my seventh gospel CD and was going to a photo shoot. (I told her), ‘I’ll tell you what I’m going to do. I’m going to buy some framed just like yours. I’m going to pop the lenses out and put the tape in the middle of them and make it cool.’”

When Guitar Mac left Helena, Arkansas in 1968 his baby sister was 10 years old. When he came back in 2000, she was 40. He’s busked the Biscuit every year since, flying in from California and sitting in front of the official merch. store watching his guitar case fill with dollar bills. He plays a National Steel guitar he bought for $500. He’s seen similar ones on the wall for $6500. He also has Dobro number 184 and plays the music of Tampa Red and Petie Wheatstraw whose nickname he says with a sly cackle was “The
High Sheriff from Hell.”

At 68, Mac is the only one of his childhood friends left alive. He remembers his first sip of corn liquor. It gave him a soar throat for a week. He learned his licks from a transistor radio tuned to WDIA with deejays Rufus Thomas and Blues Boy King. He couldn’t afford records because he was earning only $3 a day chopping cotton. He’s released 17 CDs, has 250 works on ASCAP but claims to get only $15 for 1500 plays on iTunes and earns more money busking at the Biscuit than he does gigs in California.

Oh, and he’s good. When he first came back to Helena, The Biscuit’s Godfather, Bubba Sulivan had him sit in with The Jellyroll Kings. “He thought because of going to California my style had been sanitized.” It hadn’t. Mac’s got the mojo.

Lonnie Shields met Sonny Boy Williamson at age four when his dad took him to KFFA radio station to hear him perform on King Biscuit Time. Now 59 Shields was back playing the Front Porch stage with a six-piece band that couldn’t all fit on the stage. He flew off the stage whirling through a packed hall swirling around and around like a hurricane, singing Bobby Blue Bland, B.B. King and Al Green classics at the top of his lungs.

“It comes from the heart,” he says about his intense delivery. “I play that way, and the people make me feel that way. And I give myself to God, and all of my stuff comes from Him. That’s the higher power, whatever you want to call it. I feel it. I mean I close my eyes and just feel it. I feel the notes in my head. I just deliver.”

I had the honor of once again hosting the first hour of the Call and Response Seminar. The second hour was handled by blues Renaissance man Roger Stolle. Nashville blues singer Nick Nixon got the biggest laugh describing his disturbing reaction to Jimi Hendrix whom he befriended at Fort Campbell in 1962. Nixon and his friends thought Hendrix just couldn’t hit the right notes. But it was Paul Thorn who captivated the crowd in concert and at the seminar. While never claming to be a blues man, he nonetheless has become the Biscuit’s favorite son since the passing of Robert Lockwood, Jr. He told the crowd that the theme of his new album Too Blessed to Be Stressed is about being positive. If you can afford to come to the Biscuit and take your wife out to the Cracker Barrel, you are blessed, he said. And he left the seminar early so he could spend time with his wife and child.

Roy Rogers and Sonny Landreth performed for the first time together. Rogers is the fastest and most skilled slide player alive, and Landreth is the most original. Rogers’ work with the late Doors keyboardist Ray Manzarek showed his ability to stray from the blues format in some very creative ways. Together, Rogers and Landreth stuck closer to traditional slide classics like “Walking Blues,” “Terraplane Blues” and “Shake Your money Maker” and at times the onslaught was withering, but it would be interesting to see what they would come up with if they put the time into creating new music together.

Reba Russell is a perennial favorite at the Biscuit. She told a Friday afternoon main stage crowd, “Heaven came to Helena, and the devil, he let go.” That could be the mantra for the weekend. The line between religious and secular is blurring into a spiritual awakening that is the keynote of this annual pilgrimage to the fertile delta whose music was born out of the brothels, gambling houses and jukes of the 1940s and the music that KFFA broadcast into the noonday cotton fields.

Mr. Sipps has transitioned from gospel to blues and been baptized with a thumbs up after playing “The Thrill Is Gone” with B. B. King. Paul Thorn’s daddy is a preacher, but his uncle is a pimp. Guitar Mac says he’s not religious but he believes in doing the right thing, saying, “Only sinners need to go to church because if you’re not a sinner you don’t need to go to church.” Shields credits God with his talent, and Sunshine Sonny Payne soldiers on through more than 17,000 episodes of the King Biscuit Time Radio show as people from around the world travel to King Biscuit, the Jerusalem of the blues.