Rusty Wright Takes His Blues Further Down the Road 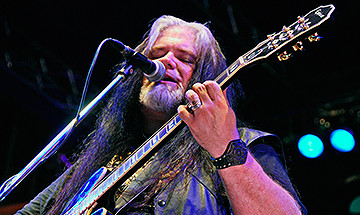 Rusty Wright has been involved in music all his life. He loves his blues, and it shows every time he plays it, whether it’s scorching lead driven rocking blues, or blues with a jazz or country feel. Growing up in a musical family in Michigan and Alabama, he was influenced by several styles of music and learned from all of it. Forming his own band with singer guitarist wife Laurie in 2004, they had the good fortune to open for Lynyrd Skynyrd at their second gig. The band has recently issued their self released album Wonder Man, on Wright’s Sadson Music label.

American Blues Scene spoke with Wright about his lifetime of playing and creating music, self releasing albums, and what blues means to him.

Barry Kerzner for American Blues Scene: When did music begin for you?

Rusty Wright – The very beginning for me was right from childhood. I grew up in a very musical home. My mother actually sang opera when she was very young, and was part of an opera group that did college musicals. Her real love was gospel. She loved Southern gospel, usually the four part quartet style gospel. She had a very successful group, The in the ’70s called The Temples that cut five or six vinyl records and toured all over. That was my first gig, playing guitar in her backup band when I was about thirteen.

I was in the blues from a very early age because not only was I surrounded by her doing that, but my dad, he came from Florence Alabama, and he had a very large vinyl record collection. He couldn’t play himself, but he was real music audiophile. He had all the Chess Records stuff, and all the vintage vinyl blues stuff. You know, Etta James, Muddy Waters, Howlin’ Wolf, Willie Dixon. Then of course he also had the early rock and roll like Little Richard, Jerry Lee Lewis. So I’m listening to all these styles of music all the time. I was inundated with classical one minute, and Howlin’ Wolf the next.

Who were some of your other influences?

Coming from Michigan, I was all inundated with the Motor City guys; Ted Nugent, Mitch Ryder, The Rockets, Bob Seger. It was really blues based, with much more aggressive guitar work.

The thing that really changed things up for me was that my father being from Florence, Alabama, every year when school would let out, as I was growing up, him and mom would always take vacation in June and they’d go down to Florence to spend a week with the family. They would come back up to work and stuff, and leave me down there. I would spend my whole summer with the family down south. So I was inundated with all the Southern rock stuff. My cousins were listening to The Allman Brothers and Lynyrd Skynyrd. I tell people that I’m just a creature of extremes.

You formed the band in 2004 with your wife, Laurie.

I’ve been a professional musician my whole life and I started in that backup band for my mom. I was, I still am, a studio musician on call for studios up here in Michigan. I’ve played everything from country to heavy metal to blues to jazz. Basically, I was one of those guys that got the call to come and fill in when somebody needed something while still working on my own thing on the side. So, I’ve been a professional musician since the very beginning. It’s the only real job I’ve had for any long period of time. Everything I’ve done has always been music related. It’s been pretty much a musical life since I was born.

At your second show, you opened for Lynyrd Skynyrd, on your anniversary.

Because I’ve been a player all my life, I know a lot of people out in the business, and a friend of mine who was a booking agent had a situation where they lost their opening act for Lynyrd Skynyrd at an amphitheater show here in Michigan. She calls me out of the blues and says ‘I have this opportunity and I need to fill this hole and you’d be the best guy for it.’ I was like ‘Man, that’s my anniversary and I promised my wife this year that I wouldn’t book anything.’ She says ‘Well, it’s Lynyrd Skynyrd so you tell me.’ I told her to give me five seconds and I’d call her right back. So I called my wife and said, ‘I know I promised that I wouldn’t book anything on our anniversary this year, but if you don’t want to do this gig I’ll understand and we’ll go out and have a nice dinner. Or, we could open for Lynyrd Skynyrd in front of a bunch of people.’ So, we were on for the show in about two minutes. I called back, set it up, and we did the show.

The guys in Lynyrd Skynyrd are probably the nicest headliner I think I’ve ever worked with; very down to earth and good folks. I was standing there on stage playing and all of a sudden, Laurie walks over to me and she’s looking me in the eye, and her eyes are as big as saucers and I’m like ‘What?’ She nods her head over and I look over to the far side of the stage, and there behind the curtain, out of sight from everyone else, are all three guitar players from Lynyrd Skynyrd standing there, looking.

I’m thinking, ‘Oh man, what’s up?’ So we finish the show and head off the stage in the other direction. I’m thinking I set up in somebody’s spot or somebody’s pissed off; I don’t know. There’s a hallway behind the stage, and here comes all three of them walking down the hallway as I’m putting my guitar away. I’m thinking that this is gonna be either really good, or really bad. They walked right up and they’re smiling, shake my hand. Rickey Medlocke comes up and says ‘Dude. Where the hell did you come from? That was great.’ So after that, we were all pals for the rest of the night.

Tell us about your self released 2006 album, Ain’t No Good Life.

We’d been playing a little bit and I decided if we’re going do this I’m gonna do it all the way. I write a lot, and I create things all the time. I’m a painter, and also a writer. So I had all this music, and I decided if I’m going to play the blues, I’m going to put it out and work it and let the world know that I’m here. We approached a couple of record companies and they poo-pooed, ‘Who are you?’ and such. They didn’t pay much attention. I don’t care to fight with people about stuff; I just plow through them or go around them and do things my own way. We set up a record company and got all the legalities worked out, figured out distribution and manufacturing, and I can create the artwork etc. The only thing I gotta have from outside is the PR and mass duplication.

The nice thing about being your own record company is that you’re not obligated to anybody. You don’t have to sit around and worry about ‘What will make the most money?’ I really get tired of that. I think the greatest acts in the world, the ones that we all sit here going ‘They’re so great,’ are so great because they didn’t care what you thought. They did what they thought was great, and you lashed on to it and said, ‘Oh that is great.’

What about today, and the music being put out there now?

There’s no passion or soul inside most mainstream music. That’s why I play the blues. I love the blues because of the fact that it is an outcast child. It is the source of everything, yet it is considered a complete outsider as far as the mainstream world is concerned.

Listeners are now more sophisticated than ever before because they have so many things to listen to, and so many styles, and outlets available, which is good. The drawback is that they kind of forget where things started from. They lose their focus on what really is a great song, or not a great song.

Let’s talk about the new album.

The new one’s called Wonder Man, and folks wonder about the title. You’ll notice on the cover it broke it up into two words, Wonder Man, because the real idea behind the record is that everyone of us is a wonder man or wonder woman. Every time you have a child you have no clue what’s gonna happen. It’ like we are all born with this giant question mark on our head, and how life is gonna pan out is this absolute wonder. The album just represents my take on that whole idea that there’s so many gambits, so many different variations, so many ways that things can go.

That’s why there’s so many different styles of blues on the record. I start the album off with ‘Wonder Man,’ which has a horn section and is very upbeat swing blues, but by the time you get to the end, you have songs like ‘Whiskey Drinking Woman,’ which is a real hardcore Lo-Fi thing. Then there’s all the gambits in between, jazz blues, there’s blues rock, kind of a blues Southern rock vibe to it. It’s just because there’s so many options and choices in life, and there’s so many options and choices in blues. I really hate records that sound like the same song from one to the end.

Love it or hate it, I think there’s something on here for every style of blues aficionado. I think somebody can find something to take some from this record, no matter what track they listen to. I enjoy keeping things different and experimenting. I don’t think we should ever, ever put the blues under a glass case and lock it up because then the only people that will ever hear it are the ones that go to the Smithsonian, you know? I think blues needs to be alive, it needs to be taken forward. I live by a quote I heard that was applied to Muddy Waters and it said, ‘You pick up the blues wherever you find it.’ You learn it, you know, from where you find it, but then, at some point, it’s up to you to take it farther down the road. You put your own spin, your own voice to it. Don’t be a parrot, be a player. I tell people my stuff is progressive blues, with a sense of humor.

What are your touring plans?

Folks can always find out where we’re at if they go to our website, and check the tour page. I’m leaving for a whole string of shows between West Virginia and Iowa, and up through the Midwest. We’re going over to Europe in October to do Germany, Belgium, and Poland. Then we’ll be coming back here after October and working on the next record and we’ll probably be down south from December on through the winter. I intend to spend most of the winter down in Florida, playing the festivals and shows down there.