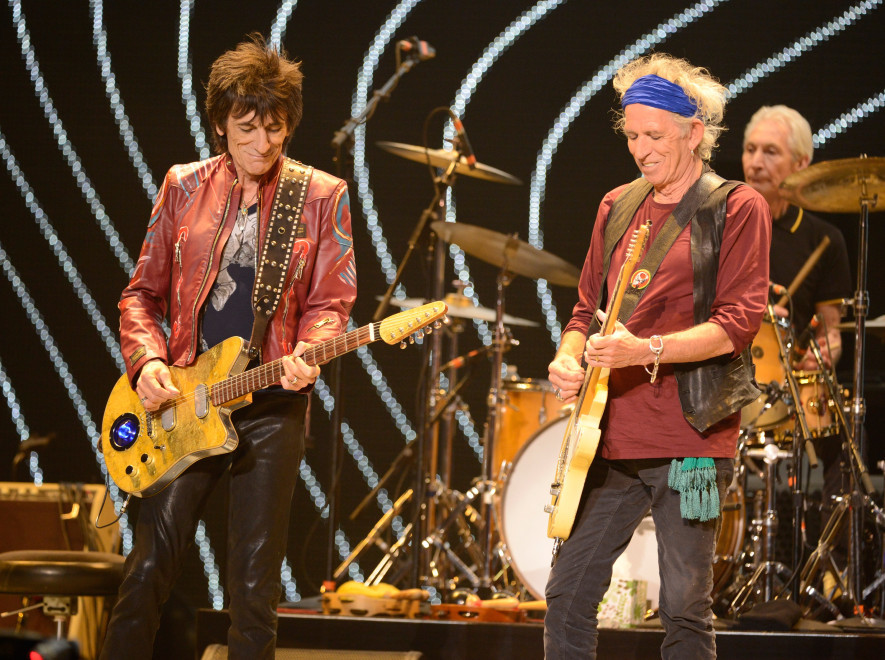 Blues is an old man’s game. Rock and roll is about youthful aggression. The Rolling Stones, now all in their early to mid-70s, don’t play by either genre’s rules, but meet the two in the middle. In Buffalo, New York on July 11, the second to last stop on their Zip Code tour, they did no blues covers, rocked out like a teenaged garage band and extended many of their signature songs into jams, not Grateful Dead length jams and not as complex as the Allman Brothers but more like B. B. King when he got a club crowd into a lather.

As someone 71 years old myself, I always take note of where in the continuum artists are who are about my age.  Are they still improving? Are they starting their descent? Are they replacing some abilities they had as a younger person with a degree of maturity?  Are they aging gracefully, accepting that they can’t do some things as well as they once did?

The Stones have been a joy in my life longer than my wife, my children and most of my friends. They were my “entre” as Dick Waterman would say into blues in the early ’60s at a time when blues in the Harvard Square scene was a footnote to the folk boom. They connected the dots between the immature rock and roll discarded by some academics like teddy bear vestiges of childhood, young adults trying to leave behind sock hop ditties for authentic American folk music. The Stones were from proper Britain.

If they could reconnect the dots between rock and roll and the blues with their pure and primal energy, we in our academic ivory towers could let down and grow our hair. The kids were all right,  grooving on da boys’ redefining of songs like Irma Thomas’ “Time Is on My Side,” Bo Diddley’s “Mona,” Slim Harpo’s “I’m A King Bee,”  Rufus Thomas’ “I’m  Walking The Dog,” “Little Red Rooster,” “If You Need Me” by Wilson Pickett , and “Good Times” by Sam Cooke, all on their first four albums.

Jerry Garcia is 20 years gone, a victim of his own excesses who looked like a 70-year-old Santa at 50. The Beatles are but digital dots and dashes in the dust. But Keith Richards’ live – very live – image splashes to 40,000 people in Ralph Wilson Stadium, Buffalo, from three screens 75 feet high. Yes, he looks like The Portrait of Dorian Gray, and I couldn’t help wondering as I watched him splay his notes through “Tumbling Dice,” “Midnight Rambler,” and “Sympathy for The Devil,” what the teenaged daughter of the couple standing next to me on the 30-yard line thought seeing a guy who looked like her grandfather three days after his death playing rock and roll with the excitement of a teenager in her rec room.

Even by the enormously expanded contemporary definition of the blues, The Stones could hardly be called blues artists today. Their second song of the night, “It’s Only Rock and Roll but I Like It,” declared their position, but their closing song and first number one hit in 1965, “Satisfaction,” executed with panache and fireworks is, after all, the bottom line of a good percentage of all blues songs. Your lady is on “a losing streak….maybe next week.” And if they want to have the Calvary Church Choir from Greensboro, New York back them up as Mick sings “You can’t always get what you want, but if you try sometime, you just might find, you get what you need. ” Hey, why not? Doesn’t that sum up the cathartic ability of blues to cut through whatever trauma is impinging on your life?

Rock journalists have been commenting from the time Brian Jones died in 1969 that the Stones were getting too old to rock and roll. They’re in their 70s now. Did anyone ever say B. B. King was too old to play the blues? And he lasted to 89. Get over it!

I’ve seen the Stones do it live since 1965, and they’re better today than they ever at least since the Steel Wheels tour in 1989, although I have to admit I exhaled slowly as they mounted the stage in Buffalo. Their 2013 Boston show felt like they were running an endurance marathon, and even with guest guitarists Mick Taylor and Gary Clarke spotting him, Keith Richards’ arthritis was noticeably affecting his game. This time Taylor and Clarke were gone. They were stripped down to the core unit. And they were having fun! Mick and Keith now live an ocean apart, and their collaborations on new songs, few as they are, show it. But on stage? Pure nirvana.

The pining angst on “Wild Horses” is all about the blues, even though musically it’s a slow dance at the ballroom. And the guitar exchange between Ron Wood and Keith is garage rock of the highest excess, keening splashy water balloons of defiance. Like R. L. Burnside did, Keith Richards makes up for his loss in dexterity with a redoubled attack to the point where there is more AC/DC and Ramones in his attitude than Bobby Blues Bland or Robert Lockwood, Jr.

Ron Wood has aged way more gracefully, and he takes up whatever slack there might have been since 2013 when the band toured with Mick Taylor sitting in. Grinning so openly that his lips practically kiss his ears, Ron bounces on his red sneakers and gooses Mick Jagger into a two and a quarter-hour set looking like a 4-year-old boy splashing in mud puddles.

Mick’s neck and face are strings of stretched spaghetti, but he’s perfected his happy dance to the point where what looked like a failed attempt to copy James Brown in the 1964 T.A.M.I. film now functions like a well-oiled six-cylinder engine. He wasn’t even breathing heavy during the last half hour rush to the finish line.

Opening act St. Paul and the Broken Bones from Birmingham, Alabama, put an exclamation point on the Stones’ roots. This nine-piece band did 40 minutes of originals that would have been right at home in a southern tent revival. Their one cover, Otis Redding’s “Try A Little Tenderness,” was squarely in their comfort zone. And the sound mix was spot on as it was throughout the Stones’ show. I haven’t heard clearer separation at most club shows, let alone a sports arena.

Yup, they jacked me up yet again, a potent youth serum. Life begins at 50? Hell, these guys are out to prove it begins at 70.