Bluesman/Surgeon Dr. Dan Ivankovich up for CNN Hero Award for healing the “Mean Streets” of Chicago 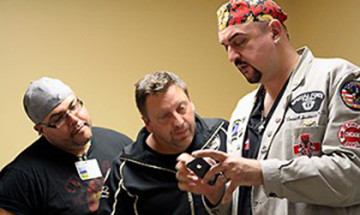 On October 8th, 2015, CNN announced that Chicago bluesman and spinal surgeon Dr. Dan Ivankovich has the great honor of being selected as one of the top ten CNN Heroes of 2015. Now through November 15th, people can vote for their choice of the recipient of the highest honor: CNN Hero of the Year.

Dr. Dan Ivankovich loves his home town of Chicago. Raised and educated here, he wouldn’t want to live anywhere else. As gigging musician Chicago Slim, he was mentored by some of the legendary masters of the blues for which the city is famous, and is intimately familiar with the neighborhoods where the blues flourish, some of which are home to the meanest streets in the nation. As a world class orthopedic surgeon, he is also painfully aware of the extent to which whole communities are under served when it comes to accessing and affording health care.

Over the course of his adult life, Ivankovich has witnessed the violence and heartbreak the streets have inflicted upon vast numbers of families in his beloved city of Chicago. Determined to do something about this, including treating those can not pay, in 2010, he co-founded nonprofit OnePatient Global Health Initiative with Dr. Karla Ivankovich. Since then, he has treated numerous patients, estimating that more than 100,000 people have benefited from the program. In addition, he performs hundreds of surgeries each year, and also operates three clinics in the city.

Ivankovich walks the walk and is always involved in ongoing efforts to help those in the under served communities, including the musicians he loves and performs with. In addition to his efforts with OnePatient Global Health Initiative, there are seminars and symposiums where health care issues are discussed and screening is offered. His desire is “to give hope to a hopeless situation. I have the opportunity to transform their lives. It’s incredible when you see them taking their life back and you see them owning their health and their wellness. There’s no greater feeling in the whole world.”

Recently, Ivankovich was selected as one of the top ten candidates for this year’s CNN Hero of the Year. In the running to receive a national spotlight on his non-profit work, as well as a cash grand prize, the award would create a positive impact and national exposure for Chicago’s blues music.

Vote for CNN Hero of the Year